Share All sharing options for: WSU Vs. Utah: Notes, Quotes And More

I'm still not quite sure how to process Saturday's game. In some ways, I'm not even sure WSU had any business coming within inches of winning it in regulation. The Cougars played a sloppy, turnover-filled game, yet still came inches from keeping their bowl hopes alive. A redshirt freshman quarterback played 45-plus minutes with a lacerated liver. And it all came down to a bang-bang play at the goalline in regulation.

Saturday's game was one that felt like it should come with an "Are you not entertained?" picture. It may not have been the best football in the world at times, but it was entertaining as all hell. Snow was falling, the field was covered throughout the second half, and Utah and WSU threw haymakers in a game that came down to the wire.

Even the officials, who were downright awful at times, added to the hilarity of it all. On two occasions, play was stopped to update the stadium on the status of the chains -- first to tell everyone the chains were broken; a second time to remind us the chains were still broken and in need of repair. This also happened: 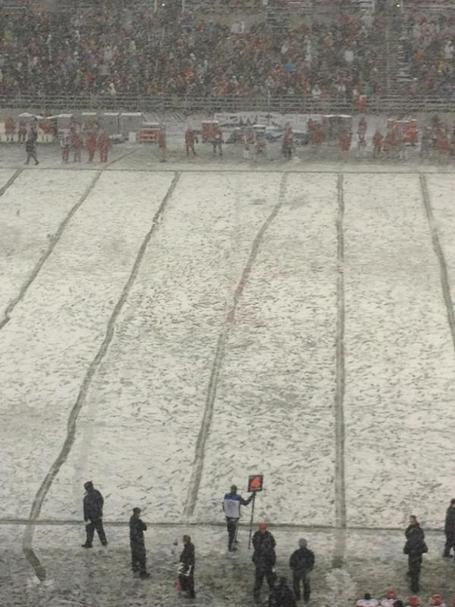 After the jump, a wide array of notes and a few quotes.

I think we made too many mistakes. Especially in the first half, our defense was playing so well. Offensively, we turn the ball over three times. The only thing I can think about right now is you get a chance to beat someone at the end of the game, they give you a shot, you got to beat them in this league. We didn't play well enough, I didn't think, to win. Then we get a shot, we fight back, do a great job and don't get it. You gotta win it at the end of the game when you get a shot.

Jared Karstetter on the game as a whole.

There's context to the following quote from Karstetter. Prior to being asked about Connor Halliday, Karstetter's mood seemed to be dejected and somewhat salty. He just wasn't the same guy I'd seen in the interview room for the last year. Then he's asked about Halliday's play, his face lights up and he raises his voice like an excited kid.

"He played great. For a young kid who got hit as much as he did, to stay poised. He was getting killed back there. He hung in there, he kept scrambling, he kept extending plays. He wasn't just throwing the ball away. He was trying to make plays. That was all you could ask for. That's what got us back into the game."

And we'll file this under "Why Alex Hoffman-Ellis is the best interview" part 245. He gave a wide-ranging interview, with serious and reflective moments about his time in Pullman, how he thought this class of seniors did and where the program was heading, which we'll cover later. He also gave us the quote of the week.

"Playing in falling snow today, heavily falling snow, was a first. It was cool. It was interesting. Having to come to the sideline on timeouts and having to brush the snow out of our cleats with that little, uh, I don't know, it looked like a little foot comb or whatever (laughter)"

The bowl hopes are out the window and the Apple Cup is, once again, the bowl game for the Cougars. The players know it, the coaches know it and the fans sure know it. But what might have been if the Cougars were able to punch it in at the end of regulation to win, despite the earlier mistakes in the game.