We are only a few hours from gametime and I still have very little idea of what to expect. Instead, I'm left with a lot of unanswered questions.

Will WSU get over their redzone woes and score touchdowns?

Can the defense prevent a Cal running back from topping 100 yards?

Will the gamethread literally explode if Damante Horton intercepts a pass for the fifth straight game?

Will I be able to post the new GIFs I created for this game?

Because the game is in a baseball stadium, will the announcers make stupid "home run" jokes after every big play?

Conversely, will the announcer compare Marquess Wilson to Barry Bonds after Wilson scores an 80-yard touchdown?

How many times will we hear Rickey Galvin is from Berkeley? Or is that media guide note irrelevant because the game is in San Francisco?

Why do some people call it Frisco? That is a really stupid way to abbreviate San Francisco. 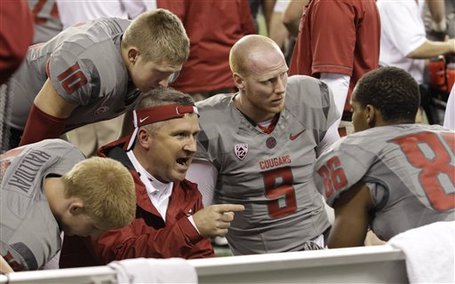 Hopefully today is the day we find some answers. Consider this your open thread to discuss the morning games if you so choose.

A first post on a Friday morning - SportsLink - Spokesman.com - Nov. 4, 2011
We're on the early flight to Seattle out of Spokane, so we'll post our Washington State links, then catch up with the rest of the Pac-12 after we get into the Emerald City (does anyone call it that anymore?). Read on.

Pac-12 Confidential | Pac-12 picks, Week 10 | Seattle Times Newspaper
WSU (plus 9.5) at Cal (AT&T Park, San Francisco) - Aside from the Oregon State game, the Cougars have put out consistent effort, and given what were reported to spirited practices this week, I don't expect anything less Saturday. This just doesn't look like a very good matchup for WSU. Enigmatic Cal still has a quality defense capable of shutting down the WSU run, putting the pressure on QB Marshall Lobbestael to make plays. On the other side of the ball, Zach Maynard has been mistake-prone, but WSU doesn't rush the passer well (12 sacks), so he may find his stride again. Pick: Cal, 30-17.

Scout.com: California 101: Home Away From Home
THE COUGS AND BEARS are kindred spirits it would seem. Both teams are trying to claw their way into bowl contention. Getting blown out by struggling UCLA last week was not what the doctor ordered for Jeff Tedford. With road games at Stanford and ASU remaining, the Bears know they likely need to sweep WSU and OSU at home to go bowling.

WSU looks to end 4-game losing streak at Cal " Kitsap Sun
SAN FRANCISCO — With four games left on their schedule, the Washington State Cougars need three wins to qualify for a bowl game and four wins to guarantee they play in a bowl game for the first time since 2003.

Cougars | WSU vs. California scouting report | Seattle Times Newspaper
The setup: The game is crucial for both teams' bowl hopes, as the Cougars need to win three of four to get to the mandatory six victories. Cal follows games against WSU and Oregon State with tough tests at Stanford and Arizona State.

Cal game has special meaning for Cougs - Spokesman.com - Nov. 4, 2011
SAN FRANCISCO – When the Pac-12 was about to become a reality and it was obvious it would be split into two divisions for football, Washington State coach Paul Wulff made it clear he dearly wanted to ensure a trip each season to Northern California.

Cal football: Important stretch starts with Washington State - San Jose Mercury News
With last week's deflating loss at UCLA still fresh in everyone's mind, the Cal Bears must steady themselves for an important two-game stretch that figures to determine whether they go to a bowl. Cal faces beatable opponents in Washington State on Saturday and Oregon State next week, both at AT&T Park. Victories in those games would get them to the six-win mark required for a bowl berth.