WSU Vs. California: Keep An Eye Out For This Red Zone Run

Share All sharing options for: WSU Vs. California: Keep An Eye Out For This Red Zone Run

On Monday in Cougar Sports Weekly, I explored WSU's red zone woes and some ideas for improving inside the 10-yard line starting today against California. One idea was to eschew straight ahead runs for wide runs, where the offense could take advantage of the speed of a back such as Rickey Galvin and the agility of linemen such as John Fullington.

Where did I get the idea? From the Cougs themselves, of course. Check out this run from Oregon State:

As I watched the play unfold in front of me, I remember thinking, "Dang, that's a cool looking play!" Galvin stretches out to the right, looking sort of stuck, then all of a sudden he bursts up an alley. It would have been a TD if he hadn't been hip checked by B.J. Guerra.

Then, all of a sudden, it hit me. I've seen this play before.

Yup. It's the Packer Sweep, as made famous by Vince Lombardi. Here's how WSU did it.

First off, here's a quick primer from Lombardi on the blocking assignments:

The Cougs obviously put their own spin on the formation, given that they run everything out of shotgun. But the basic principles are there. WSU sets up in 21 personnel: Two running backs offset on either side of the quarterback, a tight end and two wide receivers. The Andrei Lintz, however, is split wide, while Jared Karstetter is lined up on the edge of the line. Lintz starts the play by motioning in to a wing-back position: 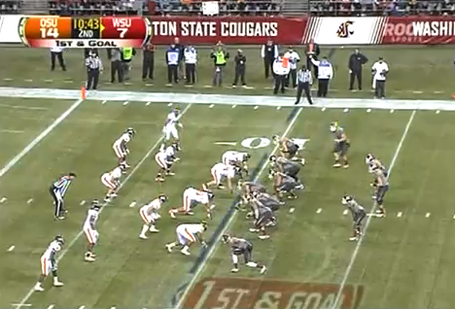 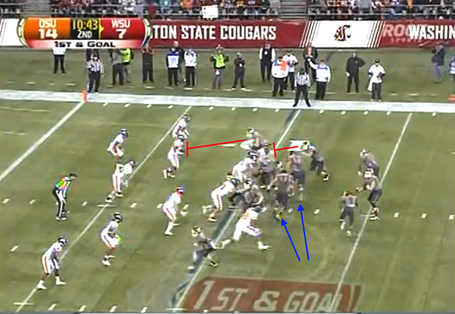 This is where the play's simple elegance really is revealed. Karstetter, easily the team's best blocking receiver, simply has to hold an unsuspecting linebacker. Lintz, meanwhile, only has to seal the defensive end -- who already is looking inside. That leaves lead blockers Fullington, Guerra and Carl Winston to take on two defensive backs and a linebacker. I like that matchup. So does Galvin.

That alley Lombardi was talking about? Watch how it develops: 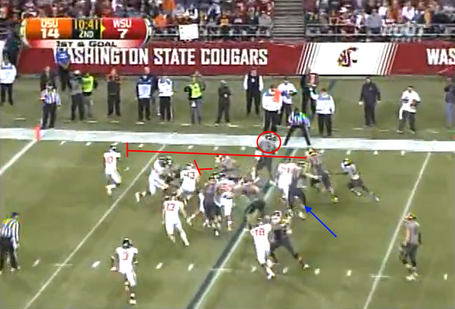 Guerra is about to take out that middle linebacker to seal the inside. Winston is destroying the corner to seal the outside. And Fullington is about to obliterate a safety. (In high school, we linemen used to call that a "weenie kill.") One interesting thing to note is that this play is almost DOA -- Dan Spitz couldn't hold his down block on the defensive tackle (blue arrow). 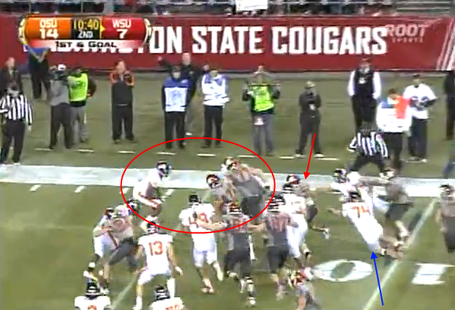 Fortunately, Galvin was able to burst past that tackle (blue arrow); he now has a wall in front of him, as Guerra has peeled off his initial block and Fullington has a full head of steam. Faced with the prospect of taking on about 600 pounds of offensive lineman to try and make a tackle, OSU safety Lance Mitchell engages with Fullington but more or less quits on the play by executing one of the better backpedals you'll ever see.

The result is a play that really should have been a touchdown, if not for a little bit of bad luck. As it was, WSU got into the end zone on a Tuel sneak on the next play.

I really like the idea of the Cougars running wide from about the 10-yard line, even though it goes against conventional red zone wisdom. WSU simply can't line up and run the ball down peoples' throats yet, and they have a quick and fast -- but tough -- runner in Galvin. In fact, WSU had success running wide in there against Oregon; although it wasn't a designed wide run, Galvin's TD came off of him bouncing it outside and outrunning a defensive back.

They probably won't run this exact play again, but a variation of it is something to keep an eye on today against the Bears.

By the way, if you're really, really interested in learning about the Packer sweep, you can watch Lombardi himself teaching it on YouTube, parts 1, 2 (which is above) and 3. Yes, it really does take Lombardi 25 minutes to teach this one run.