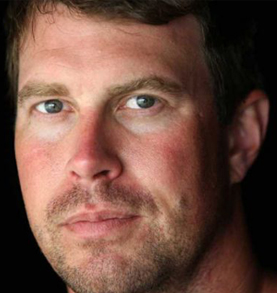 As we all descend into the football apathy that's been as inevitable as death and taxes for the past four years, how about a happy blast from the past to remind us of better days?

Some college students have a healthy perspective on life the moment they step onto campus, displaying a maturity that belies their years.

Needless to say, that was not Ryan Leaf.

Leaf's odyssey at Washington State University is well documented, most recently in his book, 596 Switch. His accomplishments on the field were rivaled only by his immaturity off it, and the boorish behavior continued when he left school for the NFL. Unfortunately, the superlative quarterbacking did not, and we all know how events unfolded after that.

A lifestyle of seeming excess. Angry tussles with the media. Thirty six interceptions against just 14 touchdowns in a disappointing 4-year professional career. Hiding in Montana. Coaching at a small school in Texas, which appeared to be positive until an arrest for stealing pain killers from his own players led to his arrest and dismissal.

He checked himself into rehab. He cleaned up. He got himself a job where he could just be himself.

And he ended his self-imposed exile from the greatest family he's ever been a part of -- next to the one God gave him, of course. When he did, Cougar Nation welcomed him back with open arms, as we always do with one of our own.

The things Leaf experienced as a student at WSU made a lasting impact on him into adulthood, and while it took him a few years to get the ship sailing in the right direction, Leaf's new mission in life is to give back - to the world and the university that gave him a second chance.

Leaf routinely gives talks on his battle with addiction, hoping to help others overcome their own demons. He speaks openly with college athletes about his struggles with insecurity, in the hopes that they can avoid the same mistakes he made. He gives back to WSU by donating 25 percent of the proceeds of his book to the athletics scholarship fund.

The "local boy makes good" story nearly turned into a tragic tale, but now it has come full circle. The man who is arguably WSU's greatest football player has now also become arguably one of its greatest men.

"I always thought my impact in this world was going to be as a football player," Leaf told his hometown Great Falls Tribune. "Then when that didn't pan out ... and the way my life spiraled down, I thought maybe I wasn't going to have an impact on anything. I wasn't going to be able to put my stamp on anything. And now to see that I'm going to effectively affect more people as Ryan Leaf the person, of what I went through, rather than the football player, is just so much more rewarding in my mind."

To see the rest of the Buick Human Highlight Reel, go to www.NCAA.com/Buick. To see some actual highlights of Leaf, watch the videos below.