A Gift To You: Inside The Mind Of A Fourth Grader

Share All sharing options for: A Gift To You: Inside The Mind Of A Fourth Grader

This time a year sees a lot of packages coming and going each day, especially when one lives 3,000 miles from their relatives. This morning, I may have received the greatest package of all from my mother. Inside there were some wrapped presents to be set under the tree and an unsealed envelope with a note attached to it. That note read, "One of your first sports stories."

Inside the envelope I found the glorious picture you see to the left, and some folded yellowing pieces of paper. Written on them was an essay I wrote in 4th grade entitled "How to get entered in the Baseball hall of fame." It is a step-by-step process on the skills you need to possess and the measures you need to take in order to be enshrined into the Baseball Hall of Fame. I assume much of the information comes from an interview with my maternal grandpa, who played baseball professionally for the St. Louis Cardinals' organization in the mid-fifties.

4th grade me had high hopes and aspirations. My best friend Wayne and I were going to play basketball for the Seattle Supersonics (oh my lord that is depressing). I even had mapped out my plan. I remember telling Wayne that we couldn't be too good in college, or else we would be drafted early in the first round. The Sonics were one of the better teams, and obviously they always were going to be, so we needed to just be good enough to get drafted late in the first round. At the time I was riding the pine on the AAU team coached by my dad. This was an AAU team that won between 1 and 2 games per session and had most likely spent the last weekend losing by 70 to the West Valley Runnin' Rebels.* To Wayne's credit, he actually was athletic. One of my fondest memories from that AAU team was him going the length of the floor in 7 seconds to send a game into overtime. That ended up being one of our rare victories. I may have cried at the end. I get emotional when it comes to sports.

*I don't even remember what our own team's name was and vaguely remember what our jerseys looked like. I do remember the black and red West Valley Runnin' Rebels team with a fat center (#7) who was impossible to stop down low. He didn't even run down the court to play defense. My Dad assured all of us he would be terrible later in life because of his size. I love my dad. 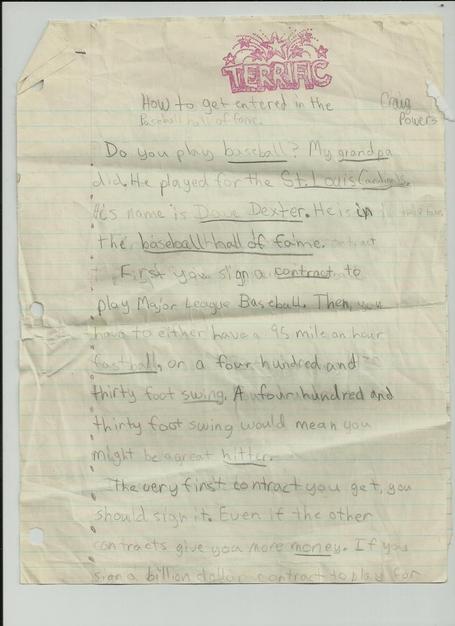 We are not off to a solid start. First, this doesn't even follow the basic CougCenter style guideline of capitalizing every word in the title. Amateurish. Second, you don't get entered into the hall of fame. Enshrined maybe? Definitely inducted. Never entered. Get a dictionary, kid.

Side note: Handwriting has not improved. Not at all. Possibly worse.

Do you play baseball? My grandpa did. He played for the St. Louis Cardinals. His name is Dave Dexter. He is in the baseball hall of fame.

Looking at my grandpa's baseball reference page, you'll notice he did play in the St. Louis Cardinals' organization. However, there is no record of him playing for the big club. A bit of a stretch. This writer seems to be taking liberties with the truth in order to sensationalize the story and possibly gain credibility as an expert on his subject.

This is some seriously shaky journalism right now. So much fail, 4th grade me. It took minutes to debunk almost your entire premise. Didn't they have Google in 1995?

Just diving right in I see. Not even introducing the audience to the topic. Just assuming they know. Bold move, young man.

But really, THE FIRST THING YOU DO IS SIGN A CONTRACT?!?! THAT IS WHAT I'VE BEEN DOING WRONG ALL THESE YEARS?!? Why did I even bother to play baseball in high school...why? All I needed to do was sign a damn contract.

You don't even need to be good at baseball before signing the contract. After you do that, then you get the 95 mph fastball and the power-hitting stroke.

Wait...maybe this kid was onto something here. This may have been code for "use lots of steroids to get good at baseball." After signing a Major League contract, it would probably be a lot easier to find those "personal trainers" you need to help you bulk up. This 4th grader was promoting the use of performance-enhancing drugs in 1995, at the beginning of the Steroid Era in Major League Baseball. 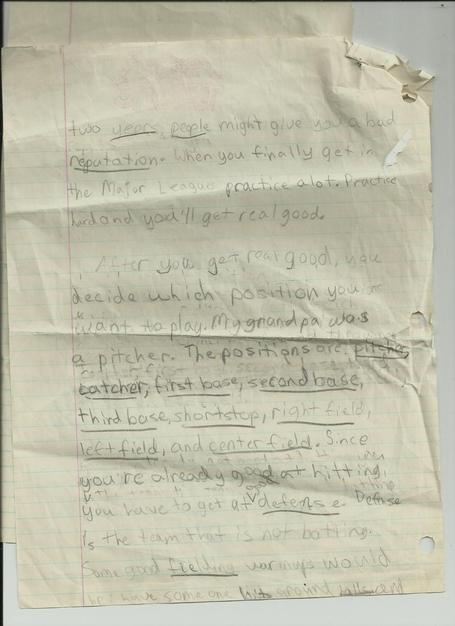 The very first contract you get, you should sign it. Even if the other contracts give you more money. If you sign a billion dollar contract to play for two years, people might give you a bad reputation. When you finally get in the Major Leagues practice a lot. Practice hard and you'll get real good.

It's almost as if this kid was openly pleading to the future sports heroes in his life, who would eventually leave over money. Did he see the Alex Rodriguez/Rangers signing happening 6 years prior? If the baseball players were so willing to take his steroid advice, why didn't they take his advice here? People in Seattle hate you Alex and all you have to console yourself is the billion dollars you made for playing two years.*

*If someone offers you 2 billion dollars to play baseball for two years, you take it. After that, buy an island in the tropics and retire. Don't listen to this kid. He is an idiot who thinks he will play for the Sonics someday.

Let's not ignore the grammar failings here. "Get real good." Did this kid do any editing at all? And the teacher, stamping "Terrific" right at the top? To what kind of low standards were these kids being held? That's just embarrassing for all parties. Shameful.

After you get real good, you decide which position you want to play. My grandpa was a pitcher. The positions are pitcher, catcher, first base, second base, third base, shortstop, right field, left field, and center field.

This first person narrative is getting a little old. Who cares what you think, kid? I want the facts. My college professors would cringe at all the "I's" and "yous." And we get it, your grandpa played baseball. Don't need to bring it up every single paragraph.

There is a position excluded, that of the designated hitter. Was this kid part of the movement against designated hitters in the hall of fame? Was Geoff Baker consulting on this piece? Apologies to Edgar for the omission. Who knew this seemingly innocent essay had such far-reaching consequences. 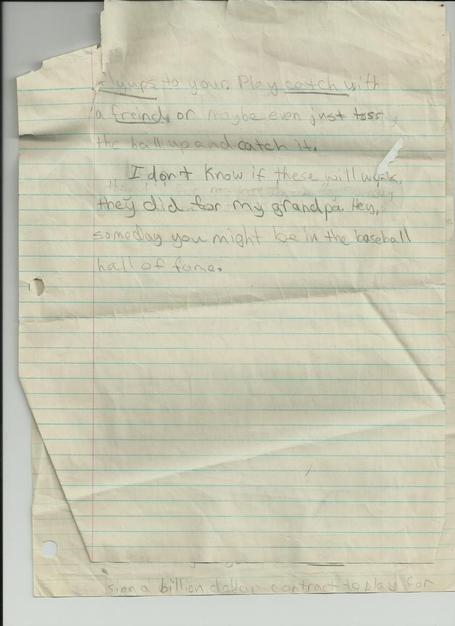 Since you're already good at hitting, you have to get good at defense. Defense is the team that is not batting. Some good fielding warmups would be: have someone hit ground balls and flyups to your. Play catch with a freind or maybe even just toss the ball up and catch it.

Why does this kid feel the need to explain defense? Why does he assume we know what batting meant? Hall of fame? Baseball? Sounds like someone had a word count to reach.

It appears he has jumped the shark in the grammar and spelling department. "Flyups to your?" "Freind." No comment from the teacher. HOW WILL HE LEARN? HE COULD END UP SPELLING FREIND WRONG FOR THE REST OF HIS LIFE! HE MAY NEVER SPELL GOOD! GIVE THAT KID A BIG FAT 'F" AND MAYBE HE'LL STUDY HARDER FOR HIS PROBABILITY FINAL IN GRADUATE SCHOOL.

I don't know if these will work. They did for my grandpa. Hey, someday you might be in the baseball hall of fame.

That's it? Already be a good hitter and learn how to play defense? Don't make a lot of money? THAT'S ALL YOU HAVE FOR ME? AND YOU WRAP IT UP WITH ANOTHER REFERENCE TO YOUR GRANDPA?

After all that confidence and truth-stretching to establish credibility, you end up saying "I don't know if these will work?" Why even write the paper? I'M BEGINNING TO THINK YOU HAVE NO IDEA WHAT YOU ARE TALKING ABOUT FOURTH GRADE KID.

If this is the garbage that passes for a five-paragraph essay in American schools, it is no wonder the Chinese/Japanese/Canadians are going to be taking us over in five or six years or something. One can only hope our own Jeff Nusser has a little higher standards.

But maybe this wasn't about actually learning to get into the Baseball Hall of Fame. There were too many controversial topics at play here including opinions on steroid use, player compensation and integrity, as well as the designated hitter. This kid may have been just your average terrible-at-writing 4th grader, but it would seem he was a prophet for all the problems the sport would soon face. This may be the single-most important essay ever written...by a 4th grader...at Naches Valley Intermediate School. His grandpa must be pretty cool.