HOT COUGAR ACTION: The Many Faces Of Abe Lodwick

Share All sharing options for: HOT COUGAR ACTION: The Many Faces Of Abe Lodwick

If you've been around CougCenter for a while, you may have noticed the occasional "shot face" reference, especially when it comes to Abe Lodwick. Look up any picture of Lodwick shooting and the chances are he is making a crazy face. As far as I can tell, this was first noticed when someone found and posted this screenshot during the NIT last season. 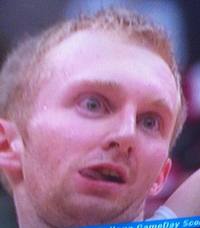 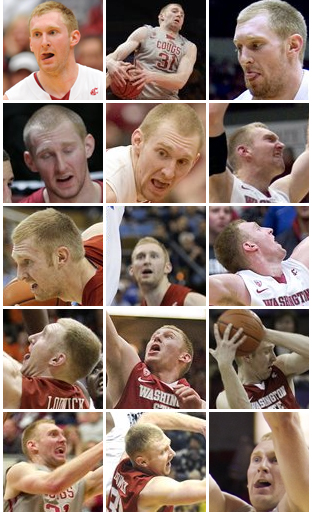 Starting at the top left: dribble face, wrestle for the ball face, foul face, console a teammate face, watch a loose ball face, dunk face, why is a guy on my back face, watch a shot face, block face, layup face, attempt a Capers TM face, rebound face, runner in the lane face, take a charge face and the glory that started it all, shot face.

Christmas comes early for some in sports world (Hicks) | al.com
Washington State: While others wavered toward making the same move, the Cougars offered their head-coaching job to Mike Leach. He's a great fit for the community, team and league, and those are great fits for Leach, too. Many feel he will make WSU competitive again.

WSU's win over Pepperdine, next-day edition - SportsLink - Spokesman.com - Dec. 23, 2011
Washington State: It's obvious people in Seattle love KeyArena but it's easy to see why the city couldn't keep an NBA team with the place. It's just not up to snuff as a modern facility – at least it wasn't last night. There is just not enough room around the court for all the needs of fans, game personnel, media, all of whom were crowded into too small a space.

Santa comes early to Washington State - Pac-12 Blog - ESPN
It might be a stretch to say Washington State's hiring of Mike Leach is yielding fruit before he's even completed a recruiting class or played a game, but then again it might not.