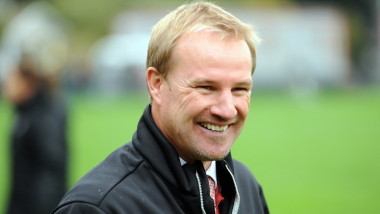 I imagine the women's soccer coach leaving for the same position at another school isn't news on most of SB Nation's college sites, but when that coach has taken the program to NCAA tournaments in three of four years -- at a school that has had precious little postseason success in most sports -- it causes even casual fans to take notice.

So it is that Matt Potter leaving WSU for Oklahoma is news today.

Potter led the Cougars to an 88-69-22 record in nine seasons at WSU, including three NCAA tournament appearances, all in the last four years. This season's run ended with a loss to Virginia in the second round.

Potter didn't give a specific reason for leaving WSU, but did say the following in the news release from Oklahoma:

"I want to express my sincere gratitude to my former athletic director, Jim Sterk, and his staff at Washington State. I will be forever grateful for the coaching opportunity and faith he showed in me. Also, I would not be here if it were not for all the players and staff who I have had the privilege of working with. I will miss the people behind the scenes and the town of Pullman, which we called ‘home’ for almost nine years. I will always cherish the memories."

Whatever Potter's reason, the move is a little curious in that next year's team could potentially be the best in school history; the Cougars' top three goal and point scorers -- Jocelyn Jeffers (sophomore to be), Brandi Vega (senior) and Eileen Maes (junior) -- all return, as does goal keeper Gurveen Clair (sophomore). Chances are very good Potter could have parlayed his success into another job just as easily next year.

Or maybe Potter just felt comfortable making the move now because the cupboard stocked for the next coach. And nine years is a long time for any coach to spend in one spot.

If Bill Moos decides to turn to the current staff, recruiting coordinator Jason Goodson would seem to be the most likely candidate. Although he has been under Potter for the last four years and oversaw the recruitment of the outstanding young talent on the team, he has no collegiate head coaching experience. Knowing Moos' M.O. the way we do, I'd be surprised if he doesn't go outside the university for a replacement.