The setting and the crowd were different when Mike Leach was introduced as the head coach of the Washington State Cougars in Seattle, but the mood and the buzz remained the same as it was in Pullman. There was an excitement in the air as Leach entered the room at the Fairmont Hotel, with the gathered crowd of high-dollar donors greeting him with an extended standing ovation as he entered the room, and another as he took the podium. Everyone wanted to catch a glimpse of the new man in charge.

In Pullman, Leach's introduction served as more of a pep rally, with a capacity crowd of students, facility and media looking on. In Seattle, the gathering had pep rally elements, but was more of a way to connect with donors and reward those who make Washington State athletics tick. Donors that support Washington State with significant contributions were in attendance for an event that was part press conference, part social mixer, and the Cougars pulled out all the stops.

Renderings of the Martin Stadium upgrades were present, and there was certainly a fund-raising element to the event. Between the new coach and the new-look stadium, there were plenty of reminders of the excellent things happening in Pullman. If you haven't seen it yet, here's one of the newer rendering photos of the football operations facility, snapped by B-Lot Tailgater. 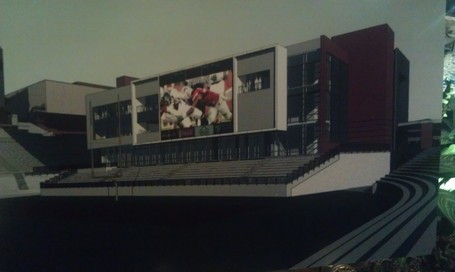 From the buzz of the crowd, it was clear Bill Moos' decision to hire Leach was already paying off. And even Leach dove into the facilities upgrades and "sizzle" going on with the program, in the most Mike Leach way possible.

"There's sizzle in these facilities going on. We've dug a hole and there's a crane standing over the hole, which I think is good," Leach said, drawing a laugh from the crowd. "Well they say 'hey whats that hole sitting there?' Once you got a hole, you've gotta fill it up or put something there. So I'm excited to say that we're gonna put something really good there."

We've talked before about how important trust and a lack of bureaucracy were to Leach in this process, something he echoed in Seattle. He came away impressed by Moos and Elson Floyd, complimenting each for their role in hiring him.

"Part of what impressed me about the whole thing -- you know, it's an honor to have the opportunity work with Dr. Floyd and Bill Moos -- but the process to me was impressive," Leach said. "You've got college football and sports and everything else that's wrapped up in bureaucracy and there wasn't any bureaucracy with this. It's straight, it's direct, it's to the point, it's how the west is."

Of course, he added another hilarious analogy about the world of college football, and the perception of athletic directors and coaches.

"When it comes to football coaches and athletic directors it's a little bit like institutionalized food," Leach said before complimenting Moos. "It doesn't matter how good it is, someone's complaining about it. Within that scenario, I didn't hear anyone complaining about Bill Moos."

Between the Pullman press conference and trip to Seattle, Leach was able to speak with the team briefly. It was just an initial meeting, but the goal was to establish a rapport and begin the transition process.

As far as recruiting goes, Leach's strategy is simple. It's tried and true in Washington State, and there shouldn't be a radical change in strategy from what we've seen in the past.

He also noted the success of Hawaiian players in college and the NFL, as well as the connection many have to the Northwest. It gave the impression the islands would be a big emphasis in his recruiting strategy. And coming from Key West, you know Leach won't mind the occasional trip to Hawaii. To recruit, of course.

It was interesting to hear Leach talk about the philosophy of his own offense. He said he originally drew inspiration from the wishbone before launching into an anecdote about playing Paul Johnson's Navy team in a bowl game. In the run-up to the game, people kept contrasting Leach's Air Raid attack with Johnson's run-heavy option. In reality, he says, the two are quite similar. The objectives are the same -- spread the ball around the the skill positions and utilize space -- but the methods are different -- one utilizes the pass, the other uses the run.

We did see Leach brush off a question in a humorous way. He's not ready to talk about who might be his defensive coordinator, but his answer to the question drew laughter and applause from the assembled crowd.

"Yeah, and virtually the last thing I would do is I would share that with you," Leach said. "If you look carefully at all the new coaches in the countries and coaches openings, I certainly don't want to limit my field and give any competitive advantage as far as me getting the best one."

Among the other notable items covered by Leach: he's excited to partake in the Apple Cup, but there wasn't any jabs at Washington, nor a huge emphasis on the game; he enjoys the small-town feel of Pullman and the environment in the Palouse; the skiing is better in Pullman and the surrounding area than in Key West; And he missed the connection between fans and students while he was away from the game. Leach was asked about his lawsuit and departure from Texas Tech, and answered questions in an open and honest way, as expected. He carries himself as a man confident in his side of the story, as he should. With the release of the book, and with it his side of the story, he feels the misinformation campaign against him has been squashed.

Your Bill Moos Quote of the Day

"As a former offensive lineman, I never thought I'd get my name in the record books. But I think having just conducted the shortest search in Pac-12 history, I may have a chance."