In October of 2009, my girlfriend and I visited a friend in Bloomington, Indiana.  We caught a football game, walked around the campus, and experienced some of the popular spots in the town.  I also had a chance to walk around Assembly Hall.  They had opened it up for a practice and there were probably over 1000 people there just to watch the Hoosiers run layup drills.  I was able to admire Indiana's championship banners and trophies (the kind that you don't have to wait 90 years to be awarded).

While it was fun to see Assembly Hall in person, the moment was bittersweet.  It is not very cool to visit a legendary sports facility if you don't actually see a game there.  I knew I absolutely had to go back.

My desire to go to Indiana was what spurned me to start this whole tour in the first place.  I figured, why stop there?  There is so much basketball in this area I might as well expand my search.  That I've been able to use my position on this site to get three press credentials has been gravy (and nice for my wallet).

Of course, I didn't get a press credential for Indiana.  They didn't even bother to e-mail me back.  I'm guessing one of the nation's more recognizable basketball programs has no problem filling up press row.  That was fine with me in this case.  We were visiting some friends and it might have been a little rude to spend the game away from them.

The game was the first loss by a home team on the tour.  IU fell down by ten to Northwestern at halftime.  I told my IU friends that they would come back and make it close.  Sure enough, they did (making me look like a genius).  They had a chance for a three to tie with less than thirty seconds to play, but it didn't fall.  Northwestern winning makes purple 2-0 on the tour, which is a disturbing stat.

On to the pictures and Screaming Head Ratings! 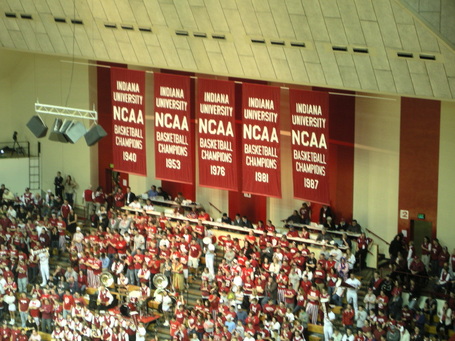 Our view from the nosebleed seats. 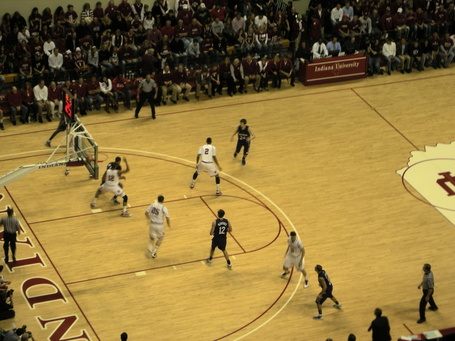 From the empty part of the student section. 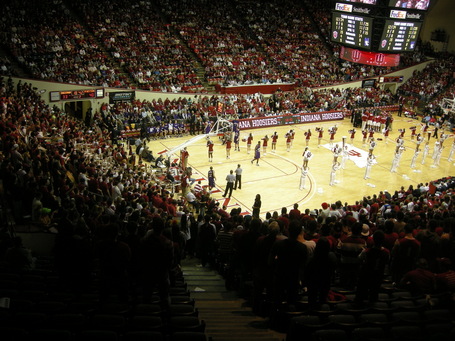 Am I allowed to say anything bad about it?  Maybe? Because the IU fans I was with sure did.  My friend's dad called it an "antique" and said the seats are really uncomfortable.  He is right on both accounts.

You can absolutely tell that Assembly Hall is old school.  No luxury boxes and the fans are packed in like sardines.  It is a product of an era where the goal was to fit as many people as possible in as small as space as possible.  It accomplishes that very well.

Despite all of this, IT IS STILL ASSEMBLY HALL.  Where the last undefeated team played.  The epicenter of what may be the most basketball-obsessed state in the country. Where Bob Knight made a name for himself by throwing chairs and winning titles. Also, the fans being jammed in so tight has the benefit of allowing the place to get really loud.

Assembly Hall is one of those arenas that is generally more important than the game being held inside of it (especially lately).  I visited because I wanted to see a game there, not because I had any interest in the outcome of Indiana and Northwestern.

The hanging video screen was also pretty fancy.  FIVE SCREAMING CRAIG HEADS (as if there was a doubt)!

I start with a picture of part of the "Big Ten's biggest student section." 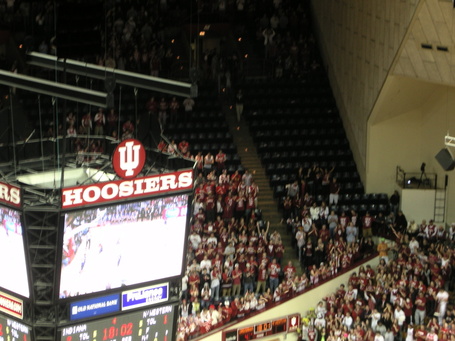 That area stayed empty for the duration of the game.  From best I can tell, IU students purchase season tickets for basketball (over 200 bucks) and they get seat or section assignments for each game.  Those students bring in  their tickets and they get a wristband which allows them access to this section and the one directly behind the basket.  For this game against Northwestern, it was pretty clear that many of the students with lower-bowl access had no interest in attending.

The strange thing is that there were students in various sections of the upper bowl.  Those students would try to make their way down to the empty seats that they saw and were turned away for not having a wristband.  So there were enough students at the game to fill the lower part of the student section, but they didn't have the right type of tickets.

At first, it seems crazy, and it is for general admission seats.  However, it really isn't that different than when I go buy a bleacher ticket to the Mariner's game and try to sit down in the 100 level (before the 6th inning of course).  I have been asked to leave.  Really, you could see it as giving the students a real-world lesson!  Way to go Indiana University officials!

From my perspective, I see those students who purchased the expensive basketball season tickets as crazy for not going.  I didn't really pay anything for the right to go to WSU basketball games and I went to every one, even when the team was bad.  One would think if a college student to is willing to fork over that much money for tickets, they must be a hardcore fan and want to maximize their value.  But I guess not many fans are as crazy as me.

The half-empty student section illustrates something I noticed among IU fans.  The older fans are really intense.  The people around me in the upper section were hanging on every play.  They were cheering loud the entire game.  Every seat in the house was full except for those few in the student section for a team that had won three games in conference.  These people grew up watching IU as a dominant force in college basketball.

The current students don't have that same connection.  Many don't care about IU's tradition.  All they've seen is a terrible basketball team for the last few years.  They don't see attending Assembly Hall as this great treat as I and many others do, because they have the chance to do it several times a month.

So that is how you end up with two sections of empty seats in the lower bowl and a completely full upper bowl.

As for the crowd, the students that were there did a good job.  They cheered on offense and defense.  The crowd on a whole had a great sense of the flow of the game.

An interesting thing that IU does is have a bunch of giant celebrity heads held up by fans behind the basket when the opposing team shoots free throws.  It's pretty funny, but I'm not sure if it is any more distracting than people waving their arms.

Overall, the crowd was very good, especially considering how bad their team is.  No perfect score however, because I cannot overlook those empty student seats. Four Screaming Craig Heads!

I have no idea what happened for the halftime show.  We decided to walk around.

Bloomington has two things going for it here.  I spent a whole weekend there and I had two hosts who know the city as well as anyone.

The festivities started as soon as we got into town on Friday night.  Nashville is around five hours from Bloomington, and you lose an hour on the way to time zone changes, so we didn't arrive until 11 pm.  We basically pulled in, put our stuff down, then were out the door to see "Here Come The Mummies."  They are a modern funk band that dresses up as, you guessed it, mummies. 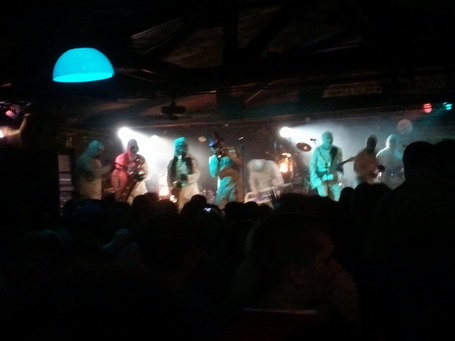 I enjoy shaking my booty as much as anyone, so I had a really good time.  I felt for the performers though, those costumes must be really hot.

The next day saw us attend Butler Winery and Upland Brewery before the game.  The winery had okay wine, but was saved by the fact that they had free delicious brownies and chocolates.

As for Upland Brewery, I will give it high praise.  Their beers are delicious.  I first tried their Black IPA.  It was probably the best variation of the Black IPA I've had yet (to be fair I've only had Stone SSR and some other random one I tried in Asheville, NC that was bland).  Upland also had amazing burgers.  They were cooked inside, but tasted like they were straight off of a charcoal grill.  The bartenders also did a fantastic job, as they were very attentive even among the pre-game rush.

I was lucky enough to bring home a variety pack of the Upland brews and have been sampling them all week.  Who knew Indiana could make good beer?

As for after the game, we spent the rest of the evening at Nick's English Pub.  Nick's is a Bloomington institution and has one of the best bar-promoted drinking games you will ever play.

The game is called "Sink the Biz."  You order it from the bar and they bring you a bucket full of beer with a six-ounce glass in the middle of it.  Each participant is given a cup of beer. The object of the game is to take turns pouring beer into the cup and getting it as close to sinking as possible.  The person who sinks the cup has to drink it.

The two people that were with my girlfriend and I were Bloomington born-and-raised and could avoid "Sinking the Biz" with their eyes closed.  It didn't take long for them to have us feeling tipsy.

Aside from drinking/eating, Bloomington offers a pretty substantial art culture as well.  There are many galleries to be found. If you are like me, you can look at them and pretend that you find some deeper meaning when you really just like the cute dog in the picture.

It was a very fun weekend.  My liver may still be recovering. FIVE SCREAMING CRAIG HEADS!

I'm way behind on these.  I've already attended Western Kentucky and Kentucky.  Look for those this week.  Also this post wouldn't be complete if I didn't say "HEY NUSS, I WENT TO ASSEMBLY HALL! JEALOUS?"

There will be some intense Ohio Valley Conference Tournament coverage this week.  For some reason they saw fit to give me the media credential I requested.  I'll give you guys a close up look into a one-bid conference tournament. They think I am a real-life writer.  Suckers!