In the previous edition of the tour I visited Indiana, a state that is renowned for its hoops obsession. This past week I went to the one state in the country that might rival Indiana's passion.

For this edition of Craig's Magical Tour, I traveled the 60 miles north to Bowling Green, Kentucky to watch the Western Kentucky Hilltoppers take on the Florida International Panthers. This was a game in which I was credentialed, and the experience was quite different than that of Lipscomb and Belmont. I'll get into that more later as I rate the "Logistics."

As the week went on I tried to figure out a way to the game. After failing to find mass transportation options that were the least bit affordable, I figured I'd see what it would cost to rent a car for the evening.

Turns out with the right coupons you can get a rental car for pretty cheap. Considering that I didn't have to pay for a ticket, it wasn't that hard to part with the cash. So, from the hours of 3:30pm to 11:30pm, I was rolling deep in a red Ford Focus (have to ride in style, you know).

The day of the game saw something that happens quite often in Nashville; two fronts of disagreeing temperatures collided, creating a severe weather system capable of producing tornadoes. By the time I had second thoughts about how bad the drive back might be, I already had paid for the Focus and was on my way.

It had become dark when I reached Bowling Green and the rain was coming down pretty hard. There were alerts on the weather channel about severe thunderstorms and tornado warnings. I checked these periodically throughout the game, pondering whether or not a hotel room would be worth it. Sometime during the game I got a twitter message from a fellow college basketball blogger who lives in Bowling Green (Aaron Flener, who writes here. I met him at the Lipscomb game). He had offered me a place to stay.

As the game went on I contemplated his offer, but eventually decided that I would tough it out and head home. It took me about 15 minutes down the road to regret that decision. As soon as I got in my car, I discovered that every radio station was devoted to discussing the storm. There were reports of a tornado touching down in southeast Nashville. There was a Nashville Metro disaster official on saying that everyone should stay home and be ready to find shelter at a moment's notice. I'm a stubborn idiot and decided to carry on anyway.

The only vehicles on I-65 were some semi-trucks and myself. Poor visibility ensured that speeds faster than 20 miles per hour were not an option. It was raining hard and sideways. From my vantage point, it looked like driving underwater through a fast-moving river. Occasionally the entire sky would be lit up, to the point where it looked bright enough to be daytime, from nearby lightning strikes. I continued to curse myself for much of the 60-mile trip between Bowling Green and Nashville. At one point, when the rain was at its worst, my peripheral vision caught a billboard on the opposite side of the freeway, and the message did little to calm my nerves:

"Prepare to meet thy God."

There are billboards like that all around the South, so seeing one isn't that strange of an occurrence. However, at that moment when I was wondering whether or not my tiny Ford Focus was going to be swept up by a flash flood or carried away in a tornado, it carried special meaning.

All was well eventually, as I came into the Nashville the storm had moved eastward and the rain had become only a small nuisance. Soon enough I was home safe and counting my lucky stars for having made it through a torrential downpour with 75 mph winds.

In the end, it was all worth it. Keep on reading to find out why through pictures and more words. 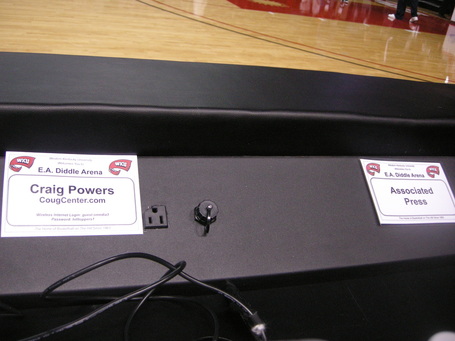 Sergio Kerusch honored before the game for his contributions to fro-hawks. 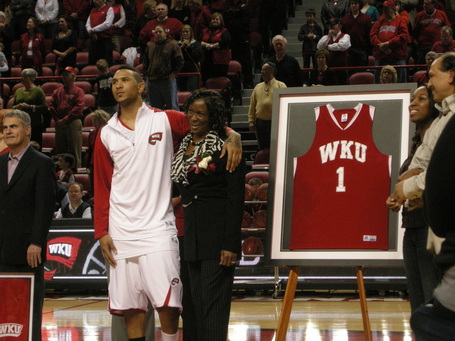 The bar for National Anthem singing fashion was just set a little higher. 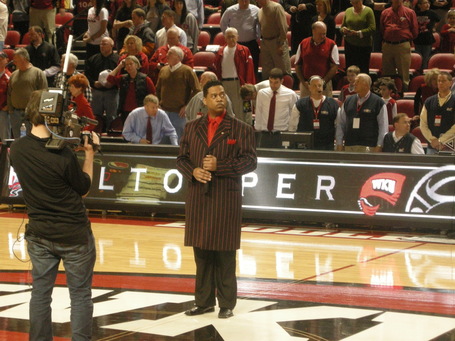 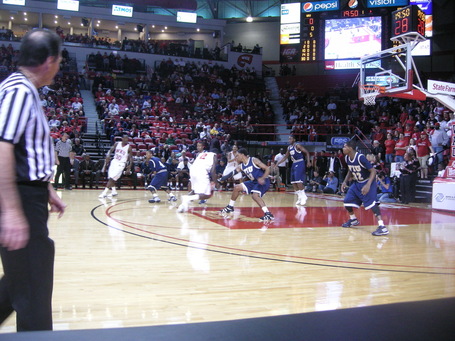 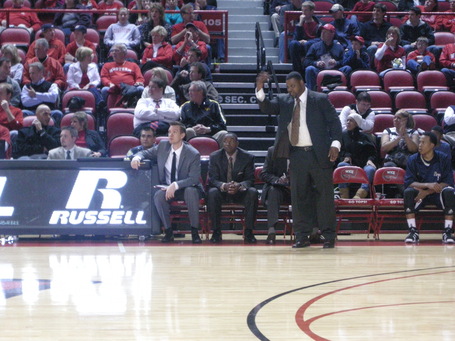 Big Red can get down. 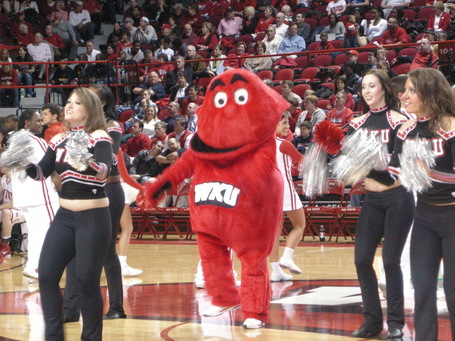 I couldn't think of a question to ask him! I FROZE UP! 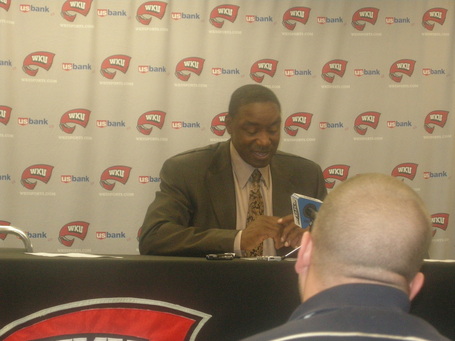 Western Kentucky has a solid basketball tradition, and the size of their arena is a good example of that. The Sun Belt conference isn't among the nation's elite when it comes to basketball, as it is often a one-bid league. However, WKU's arena seats 8,000 and has several luxury suites.

The students were placed behind the basket and the rest of the arena appeared to be ticketed seats. The lower bowl has chairs, while the upper bowl on the ends had bleachers.

There were video scoreboards in two corners, which were much clearer than the projection screens Friel Court offers. My favorite feature of the arena was the padding on either end behind the bleachers. The arena is used for performances as well, so my guess would be it is there to improve acoustics.

Overall, E.A. Diddle Arena was a nice place to watch a game. Having the students on the sideline might make for a better atmosphere, but when there is money to be made that is the ultimate tipping point. 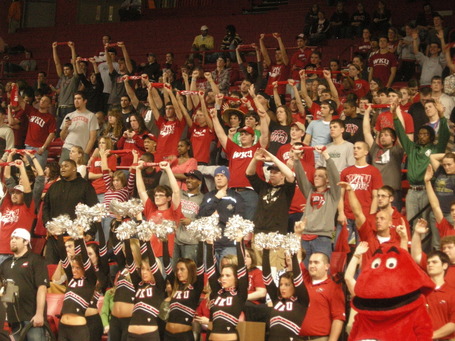 The arena was around half-full. The terrible weather was definitely an attendance factor. Losing records for both teams was another.

It was senior night and WKU was graduating its three best players. So, even with all the empty seats around, there was a lot of emotion and the few that were there brought a lot of energy. Several early questionable referee calls and four technical fouls in the first few minutes set up a game that had a unique intensity.

Having Isiah Thomas as the opposing coach didn't hurt either. The best chant I heard all night from the WKU student section was "New York Knicks."

I have to give the crowd some props for even showing up to this game in the weather conditions. I reward them with three Screaming Craig Heads. 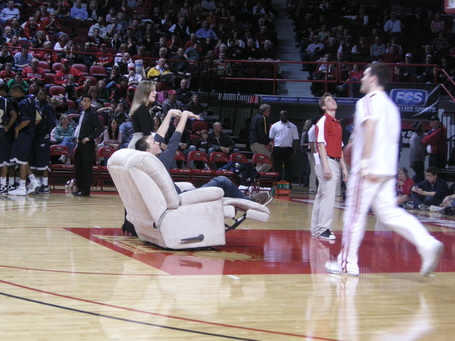 Halftime was pretty boring. First, a senior from every WKU sorority and fraternity got introduced. Second, there were kids but they didn't do anything cool. They just stood there. Why even bring them out? I'm pretty sure one of the boys was starting longingly at the hoop as they were walking off. Even he was expecting something more exciting to happen.

While I would normally rate this halftime show as low as possible, I have to give WKU credit for a lot of the media timeout entertainment. At one point, Big Red was used as a bowling ball to knock over some megaphones then immediately got up to participate in the dance team's routine. The execution was flawless.

Another media timeout saw two students competing to see who could make the most free throws in thirty seconds while sitting in a recliner. That's the kind of awesome contest I like to see.

So, on the strength of Big Red and recliner basketbalI, I give two Screaming Craig Heads.

Hats off to Assistant Director of Athletic Media Relations, Michael Schroeder. He was courteous and his staff was helpful. He asked me repeatedly before and after the game if there was anything I needed. I was shown where to sit and given instructions on where to go. At Belmont and Lipscomb, I was basically left to figure things out on my own. Everything just felt more professional.

There was special parking for the media, so that was nice. It was difficult to find in the rain, but it was right in front of the arena. I've decided that sports writers eat a lot of pizza, because that is all I've been fed so far. This time though, there was cheesy bread as well.

FIVE SCREAMING HEADS FOR YOU WKU!

I didn't really have time to do anything around Bowling Green the day of the game, as I left straight from work to get there. However, I've been up to that area before and there is one thing you cannot miss if you ever find yourself around Central Kentucky; Mammoth National Park.

When flying into Nashville, you'll notice the landscape resembles that of a golf ball. There are many sinkholes. Those sinkholes can be entrances to vast underground caves.

I visited Mammoth National Park last April when my sister came to visit. It is located about 20 minutes north of Bowling Green. The park offers a number of cave tours that take patrons into massive caverns with beautiful sights.

My sister and I were lucky enough to have the single greatest human being on the planet as our tour guide, Mr. Jerry Bransford. Jerry comes from many generations of cave guides and spent his childhood exploring sinkholes for new cave entrances. He was full of anecdotes, knowledge, and jokes about caves. It was the best tour I've ever taken of anything. 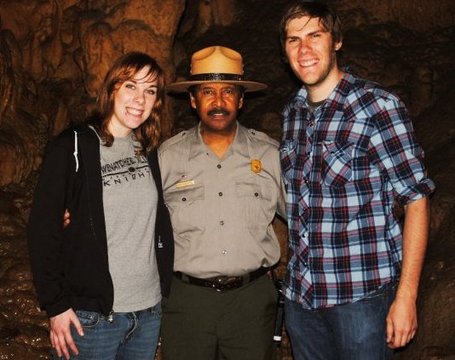 If you ever visit Mammoth Cave National Park, demand to have Jerry as your tour guide. I wouldn't want to you to miss out on the full experience.

A man like Jerry Bransford cannot be contained by a simple 1-5 rating system.

If you've made it this far, you may be wondering, "Craig, how did the actual game go?"

Well, the Hilltoppers defeated the Isiah Thomas-led FIU Panthers. I developed a strong man-crush on WKU's Sergio Kerusch. He is a 6'5 wing that has super hops. He posted a double-double and a few high-flying dunks that got the crowd excited.

One of the more hilarious sights of the night was Isiah calling over and over again for the ref's attention to sub players. There was one problem...it was only the first of two free throws. Nice job, coach.

Isiah is reserved on the bench. He got heated once and paced around for about a minute, but usually sits in his chair with his hands folded while his two assistants yell out instructions. He was equally as docile during the postgame interview. I was ten feet away from him, he had a microphone, and I could barely hear what he was saying.

There was a small group of WKU students that waited around the press room for Thomas in hopes of an autograph. How many coaches get asked for autographs from opposing fans? Pretty odd situation.

Well, this thing is reaching Bill Simmons-esque levels. I'll have the details of my UK trip up this week, which promises to be equally as long-winded. I'll also remind you that I'm covering the Ohio Valley Conference Tournament starting tomorrow night. On Thursday, the previously mentioned Aaron Flener from collegebasketballtalk.com and myself will be recording a podcast while we watch the second round action. Aaron is a pretty funny guy, so I promise it will be at least mildly entertaining from his end. I'll have that up on the site as soon as he gets it produced (he has a fancy-pants Mac, so it shouldn't be that hard).