TiltingRight copied the relevant parts of the arrest from the police log in his FanShot, but I'll repost them here, because it sort of underscores the oddness of the circumstances of the arrest (you can see it for yourself here, just pull the menu down to Feb. 25; we're redacting some of the information on our site because it's generally accepted journalistic practice): 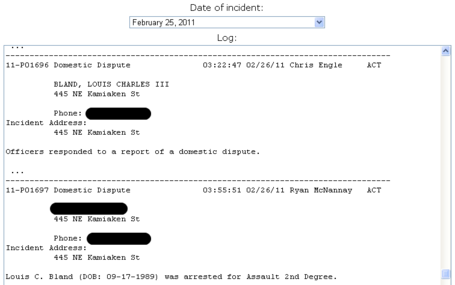 A couple of things jump out right away. First off, second degree assault is a big dang deal -- that's a Class B felony, folks. You can read the whole Washington Administrative Code here to see what sorts of actions fall under a second degree assault. EDIT: Someone pointed out that this would actually fall under the Revised Code of Washington, rather than the WAC. I have no idea if that's true, but here's the relevant RCW. Looks pretty much the same.

But here's something else I noticed: After a quick call to the Pullman Police Department for clarification, it appears Bland is the one who called police first at about 3:22 a.m. An officer responded ... and then nothing? If you look through the logs, most of the time, it describes what action the officer took. Nothing here. And most of the time, it's common practice to arrest someone after a domestic dispute (for something like fourth degree assault) to make sure the situation doesn't escalate. We have no idea what happened when the officer responded, but it didn't result in an arrest.

The second entry means there was a separate response -- in other words, the police left and came back. And when the a different officer returned, Bland was booked for a felony.

It's weird. And it's missing a heck of a lot of details.

I know it's fun to joke around about the Fulmer Cup and all that, but please keep in mind that there don't appear to be any charges filed yet and he most certainly hasn't been convicted. There also is an alleged victim in this, so be sensitive in your discussion below.

We'll keep an eye on this, but obviously this isn't good. Bland was expected to challenge for a return to the starting lineup this fall after missing all of last season with knee troubles. Maybe nothing materializes. But maybe something does.

And for a team as desperate for talent as this one, losing a guy who was expected to potentially start just isn't good.

Update from Vince Grippi, filling in the details. Police came after the first call following a dispute over a cell phone, but didn't have probable cause to arrest. Then this allegedly happened.

About 30 minutes later a third party called police and reported a female screaming from the same residence.

Officers responded and the female alleged Bland assaulted her by throwing her to the ground, elbowing her in the back, hitting her in the head and choking her, according to Tennant. Officers observed physical evidence to indicate, Tennant said, "at least some of that did happen."