Day one of the OVC Tournament is in the books and all I can say is...

But seriously, delicious pregame media room food aside, it was awesome to see a little bit of March Madness up close and in person. Click the jump for my game recaps and more awesome pictures taken with a 10 megapixel Nokia digital camera.

Tennessee State and UT Martin started the tournament off and it was pretty clear who the early favorites were: UT Martin.  Why? Not because they came out firing and jumped out to an early lead (they actually fell down 10-2), but because they not only had a player with an epic beard, but another player with a fro-hawk as well.  Fro-hawks and epic beards simply cannot be beat in March.

The power of the fro-hawk and epic beard kept UT Martin close for much of the game.   TSU would jump out to sizeable leads, but the Skyhawks always had an answer.  Finally, with four minutes to play, UTM's Mike Liabo converted a four-point play to them the lead at 60-59.

It was a lead they would not relinquish.  After a number of errors by both teams down the stretch, the Skyhawks held on for a 68-64 victory.

All through the second half, UTM freshman Terence Smith made plays to keep his team in the game.  He was consistently getting into the lane.  He made a number of very impressive passes and drew a lot of fouls.  In the end, he led the Skyhawks with 20 points on 6/15 shooting with 8 rebounds and four assists.

Kenny Moore led the way for TSU, posting 18 points on 5/13 shooting with 9 rebounds and four assists.  Go ahead and look back at my preview and see who my picks for "top players" were and bask in my genius.

The crowd was definitely thin for this one.  The TSU section was relatively full to the rest of the arena, but not that large considering the school's proximity.  There was a small, but boisterous, contingent of UTM fans seated behind me.  As the game entered the tense moments, both bands came alive and the atmosphere turned up a notch.

Speaking of the the bands, Tennessee State's is phenomenal.  They were very enjoyable to listen to during media timeouts and halftime.  The halftime show consisted of them playing music and the dance team dancing.  Not bad, considering it is a neutral site.

In the end, it only took until the very first game of the tournament for the first upset to happen.  UT Martin has a good draw for the second round, as they avoid Austin Peay.  On to the pictures! 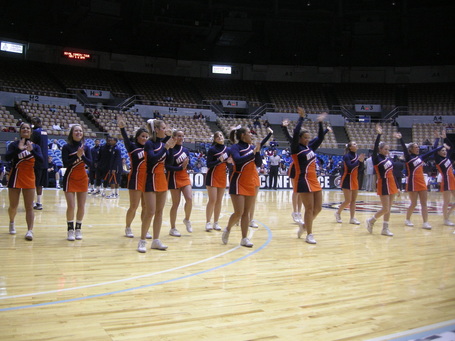 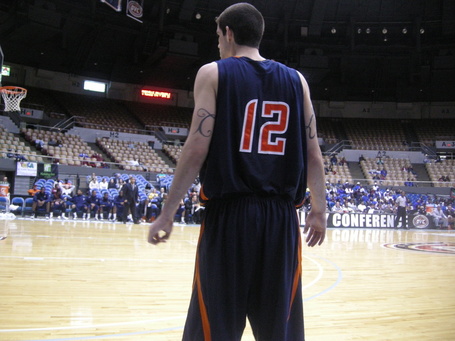 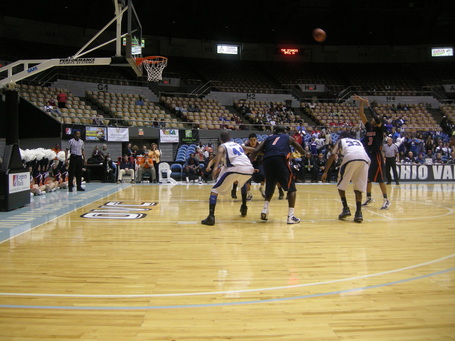 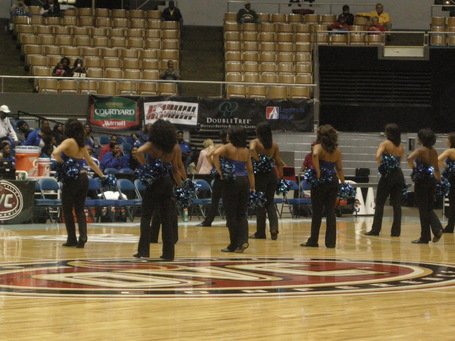 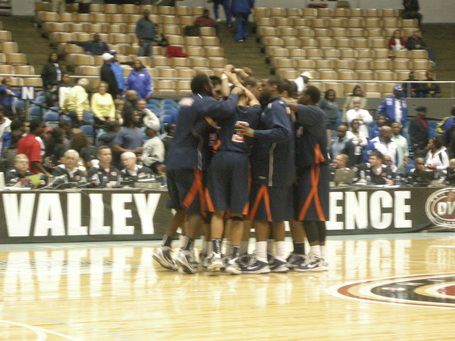 The second game brought with it the promise of a clash of styles.  Eastern Kentucky is among the nation's most chuck-happy teams, with 42.9% of their field goal attempts coming from beyond the arc.  Southeast Missouri State is on the other end of the spectrum, as just 28.3% of their shots coming in were from three.

Through the first half, SEMO seemed happy to go along with EKU's style.  43.75% of their attempts were from three.  It worked out very well, as they hit five three pointers and that was a key factor in them overcoming a 27.5 TO% to take a 29-28 halftime lead.  Marland Smith was the main culprit for the high number of three attempts, as he hit 4/6 from downtown and led all scorers with 13 in the first twenty minutes.

In the second half, SEMO started taking the ball inside and limiting their turnovers.  Leon Powell emerged from first half trouble and EKU had very little to answer him inside the key.

Meawhile, EKU kept on chucking threes and through the first ten minutes of the second half, they were not falling as SEMO extended their lead to double digits.

Marland Smith of Southeast Missouri State led all scorers with 20 points on 6/13 shooting (all his FGs were threes).  Smith also pulled down eleven rebounds.  Leon Powell chipped in with 12 points on 5/7 shooting, 7 assists, and six rebounds.

Southeast Missouri State outscored EKU 36-21 in the second half to the end the Colonels' season.  The final score was 65-49.

The crowds at this game were even thinner than the first.  The EKU fans brought the energy, standing up for most of the first half.  As their team faltered, they began to sit down.  SEMO's band took over and were loud and obnoxious for the last five minutes of regulation.

The most interesting part of the game may have been the mascots, especially Eastern Kentucky's.  Human face mascots are always the creepiest. 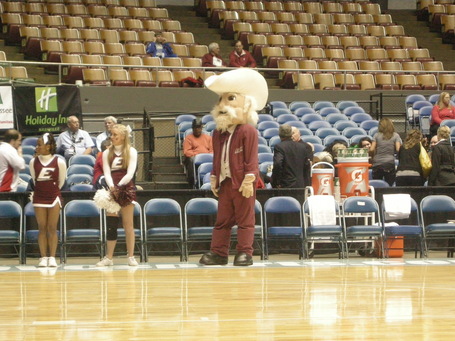 EKU on offense in the first half. 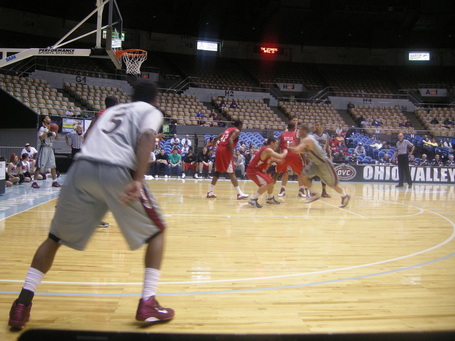 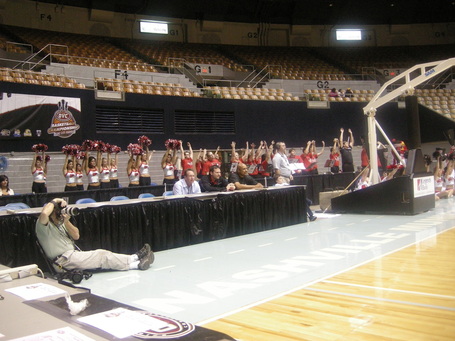 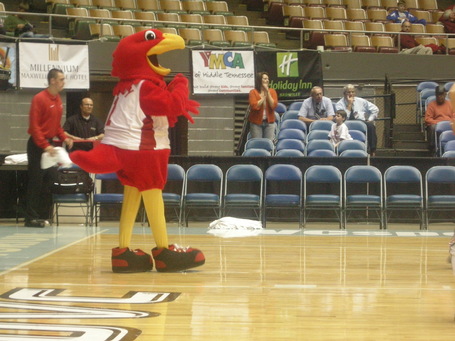 The action continues tomorrow as UT Martin takes on Tennessee Tech and SE Missouri State looks to knock off Austin Peay.  Both those games will be broadcast on ESPNU started at 4pm PST.