Spokesman-Review: Pullman Really Does Have A Higher Marijuana Arrest Rate

Share All sharing options for: Spokesman-Review: Pullman Really Does Have A Higher Marijuana Arrest Rate

The Spokesman-Review has uncovered earth-shattering news: A college town has a higher arrest rate for pot than the larger city the newspaper calls home!

I kid. But given the conversations that have taken place recently after the marijuana-related arrests of three WSU basketball players, there are some interesting -- or troubling, depending on your point of view -- statistics Jody Lawrence-Turner reports:

Of course, the police department argues that is just largely due to the demographics of Pullman, but that doesn't quite pass the smell test. (See what I did there?) According to 2000 census data, half of Pullman's population is 18-24 years old. It's 11 percent in Spokane. So, you would expect the arrest rate to be roughly four times that of its larger neighbor, right?

I recognize that's actually a little bit of fuzzy math -- priorities, staffing, etc., all play into arrest rates on crimes. But I think a reasonable person would have to conclude something is going on when the arrest rate is so much higher than what would be statistically expected.

Of course, Pullman PD went with the company line in the story:

[Pullman Police Commander Chris] Tennant said police have used a "broken windows theory" in approaching enforcement for the last decade: "If you deal with the little things, you don't have to deal with the big things. We deal with alcohol. We deal with marijuana possession. We deal with parties, noise and party trash. By doing that, we deal with fewer assaults, rape and damage to property."

This makes sense in theory, which is exactly what Tennant calls it. But at the risk of turning this into an ideological debate, I really would love it if Pullman PD would provide some actual proof of this. In fact, this is the one major gripe I have with Lawrence-Turner's story: She never asked for any proof that this was actually true.

I, however, spent about 60 seconds Googling "do more marijuana arrests lead to less violent crime," and this is what I came up with after landing here: 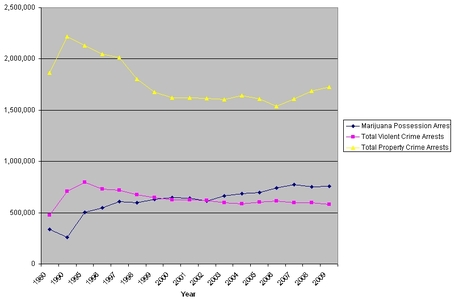 Again, I realize there are myriad explanations for why this might be -- maybe there are just more police and more arrests in general. But unless Pullman PD has its own data it would like to present that their city is different from the rest of the nation, what Tennant has to say strains credibility.

In fact, DeAngelo Casto's lawyer presents an entirely different theory in this interview with KJR: Too many police with not enough to do. That's what I would expect a defense lawyer to say, but remember -- the guy was a prosecutor in Whitman County before opening his private practice.

As for how all this relates to athletes, and whether they're being targeted? Bill Moos doesn't say they are, but you'll also notice that he doesn't exactly say they aren't, either:

"I can't say that they are" targeting athletes, Moos said. "I know we need to do some of our own work within our department in terms of code of conduct."

Maybe someday when I have time -- or maybe some industrious reader can do it for me -- I'll research marijuana, violent crime and property crime arrests in Pullman and other comparable college towns and see if there's any discernible correlation between any of it. But it shouldn't be my job to do that; the police force that's following this kind of policy should be able to justify its actions. So far, the best they can do is a "theory." And that just doesn't cut it for me.

There's a balance between keeping the campus safe and making it attractive for prospective students. I've got to think we're starting to teeter on the wrong side of that balance.