Need to take your mind off of basketball for a few minutes?  Well I have a treat for you!

In the spirit of my "Magical College Basketball Tour," I decided to attend the US Men's friendly with Paraguay.  The best, and cheapest way to do this was as a member of the media.  I am a person of integrity, so I would not request a credential without actually writing up a post (I requested the credential on behalf of CougCenter), so I decided to type out a live blog of my thoughts throughout the game.  This actually turned out to help me a lot in writing my updates for SBN Seattle, so I am glad for it.

I realize this is extremely off-topic, and for that I apologize.  After the jump, follow along on my magical, and occasionally interesting ride. 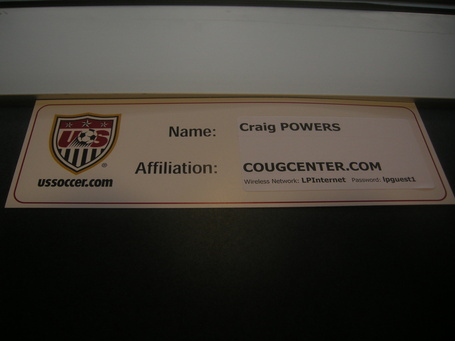 6:00 I've finally settled into my spot in the press box.  I had to walk halfway around the stadium in the rain to find the media entrance and I feared for my electronics. It ended up being worth it as  I enjoyed a delicious free BBQ meal of chicken, pork, roasted potatoes, and cole slaw upon arrival.  Free food is one of the greatest things ever. This meal easily beats the Qdoba tacos and pizza I had received in my previous press experiences.  The press box in LP Field is very nice and makes me feel cool..   There is a loud contingent of fans in the northern end of the stadium that are already at full throat with the chants.  It would be fantastic if the entire stadium was filled with folks like them. 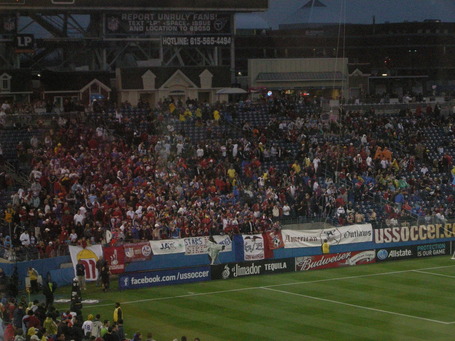 6:31 Just finished my first update of the StoryStream on SB Nation Seattle.  My limited soccer knowledge is tested in reading the lineup card.  I've given an interesting tidbit to throw in to my piece as Seattle-native Marcus Hahnemann is set to start in goal for the United States.  I consult Brian on gmail chat for guidance on how exactly to report this information.  We also lament the fact that Klay Thompson has just picked up his third foul against Wichita State.

I have discovered I am terrible at multitasking.  Getting out an update, talking to Brian, and trying to follow the Cougs is very difficult.

6:47 The rain forces the grounds crew to put a pretty awesome tarp over the center of the field.  The media release I got warned that they would be "watering" the field before the game.  I wonder if they still decided to go through with that. 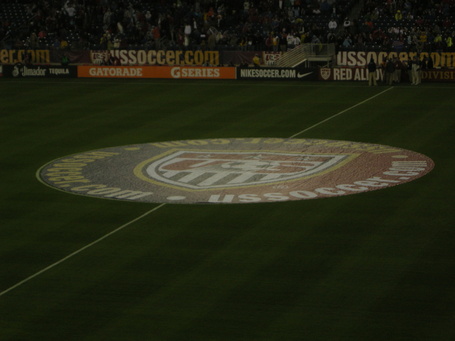 6:54 There is a group of three guys who represent an Indiana University website to the left of me.  IU is really big on soccer.  I overheard them discussing plans after the match.  The mentioned how "awesome" Broadway is in Nashville.  Broadway is the Honky Tonk district in downtown Nashville.  It is full of terrible country music covers, tourists, and hardly any draft beer (what is the point of drinking beer at a bar if it is not draft?).  I definitely do not think that Broadway is awesome.

6:57 The lineups are announced.  Michael Bradley, Landon Donovan, and Clint Dempsey get the loudest cheers.

7:03 The national anthems were just played.  I still always say "Cougs" under my breath at the end of the Star-Spangled Banner.  Just a habit, I guess. 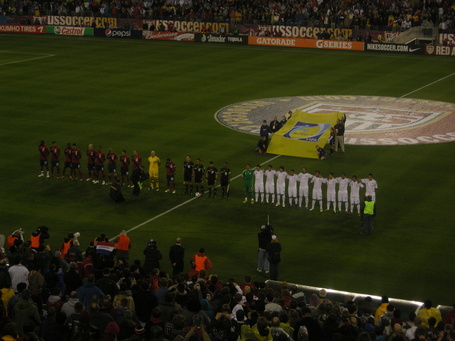 7:10 Paraguay gets the first scoring chance as a 3-on-2 break ends with a header that goes wide of the net.  The break started with a lazy pass over the middle by Tim Ream.  His next terrible pass sets up a free kick for Paraguay.

7:18 The U.S. breaks through with their first scoring chance.  Landon Donovan gets a nice run up the middle and passes left to Jonathan Bornstein who sails the shot into the stands from a very difficult angle.  The crowd moans.

7:22 Marcus Hahnemann's head is bald and shiny.  Is there a law that requires goalkeepers to be completely bald?

7:23 Just realized the crowd has been standing the entire game.  Is it because they started that way and now their seats are wet from the rain?

7:34 Just moments after my last post, Paraguay's Oscar Cardazo scores a goal off a corner kick.  The goal seemed to ignite the US side, as they've been playing much harder and have earned half a dozen solid scoring chances in the last ten minutes.  Cougs are getting doubled up by Wichita State.  I think I made the right choice to come out to this game.

7:37 The rain has really kicked in and the crowd adorns ponchos in unison.

7:44 I now feel like a soccer genius because I got to inform the man next to me that they are "halves" not "periods" and they last 45 minutes.  I decided to explain stoppage time just to make myself feel even smarter. 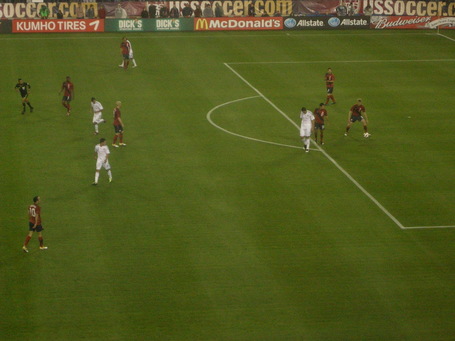 7:46 The lights just flickered. Oh Nashville weather in the Spring...

7:47 Great ball from Donovan off a free kick gets behind the defense, Jay Demerit gives a chance at a header and hits it over the net.  He immediately is subbed out in favor of Carlos Bocanegra in the 42nd minute.

8:05 Halftime is winding down with Paraguay on top 1-0.  I've just spent most of it typing up my halftime report for the SBN Seattle StoryStream and I have a new respect for Mr. Floyd.  It isn't easy typing and trying to follow the action at the same time.  There are a lot of things to remember and each little update has to be at least 150 words.  That mark is especially difficult to reach on the goal updates, as all you want to really say is "this guy scored a goal and the score is 1-0."

I'm going to see if there is anymore of that pulled pork left.

8:18 There was lots of pulled pork left. And potatoes. And cole slaw.  The US has just earned their second corner of the half in just the 52nd minute. David Yelldell is in at goalkeeper for Marcus Hahnemann and Jermaine Jones replaced Maurice Edu.  The US has dominated the first 7 minutes of the second half, but still cannot break through for the equalizer.

8:22 The crowd comes alive as Donovan sprints down the middle of the field with the ball.  He passes left to Dempsey, who decides to dribble around in a circle before having the ball taken from him. Blue balls for the fans.

8:25 The vocal contingent of fans at the north end of the stadium begin a "When The Saints Go Marching In" Chant.  It is executed beautifully.

8:28 Bornstein finds himself with the ball an on the left again, but his cross winds up in the hands of the goalkeeper.  It's got to happen eventually, right?

8:33 There are apparently a few leftover vuvuzelas from last summer. Die vuvuzelas, die.

8:35 Eric Lachaj (who I didn't notice came in for Altidore 7 minutes ago) just made a great run into the box and crossed for Dempsey who sends it into the stands.  Clearly the wave broke his focus. Die wave, die.

8:37 Random thought: They patted me down as I came into the stadium, but did not make me empty my pockets.  They obviously felt thing in my pocket, but didn't say anything about it.  What is the point of a pat down, then?

8:38 The United States with yet another free kick from scoring range and the crowd is once again left with blue balls.

8:41 The second half has seemingly been one long US set piece, with no results.

8:43 Donovan has a chance off an error by Paraguay, but it hits the side of the net in the 76th minute.  The crowd goes wild, but the players don't.

8:46 I just wanted to update for the fourth consecutive minute.

8:48 My boy Timmy Chandler checks out for Jonathan Spector in the 81st minute.  That may have been their last sub.  Ten minutes left to find an equalizer.

8:50 29,059 is the announced attendance.  A record for a soccer game in the state of Tennessee.  Lipscomb's team doesn't attract more?

8:54 Michael Bradley puts a great shot on goal from just outside the box and forces the goal keeper to make a diving save in the 87th minute. SOOOO CLOSE.

8:55 BEACH BALL ON THE FIELD.  Guy almost trips trying to retrieve it.  Best moment of the night.

10:50 Okay, I totally checked out on this thing for a while.  Jermaine Jones almost ended the game on a high note for the Americans, as he forced the goalie into a diving save in the last seconds of stoppage time.  Some people in the press box broke the "no cheering" rule on that one.

After that I typed of my recap for SBN Seattle, then headed downstairs for USMNT Head Coach Bob Bradley's press conference.  It was very interesting, and Bradley had a lot to say.  He was calm and seemed to be glad that he got the chance to work with his team for the last week.

On my way out, I was able to catch a crazy Landon Donovan fan who apparently decided that "Landon Donovan" was the perfect name for her...twins? 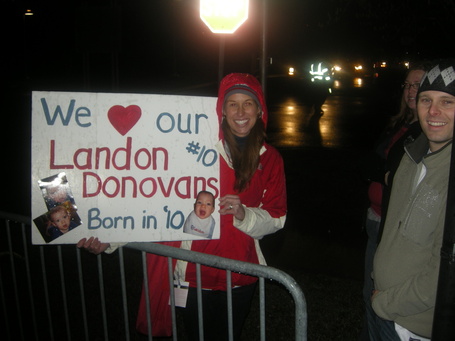 Traffic out of the stadium was pretty terrible, but I guess that is what happens when you have the largest soccer crowd in the history of Tennessee!

Overall, this was a great experience.  I got to feel like a real-life journalist and see my first live soccer match since high school.  Best of all, I wanted to go to this game, and I got in for free! With a dinner!

The Landon Donovan girl on the way out asked me how I was able to get a media pass (apparently I didn't look like the type-must be the shaggy hair).  I told her she should just start a website and request credentials, because there were plenty of open seats in the press box.

For this match, I just tried for the heck of it not thinking I would actually be approved.  Turns out I was wrong and I am glad for it.  I look forward to attending many soccer matches in the future, and I may even consider paying for one next time!