Jerome Harrison wanted to do something unorthodox in the 2006 Senior Bowl.

Since Harrison's nickname was "The Ghost", he decided to design a little something to showcase it. He took a white Cougar decal from the WSU road helmet, stuck it on the gray home helmet and - boom - the Ghost Helmet was born. I figured it would be the only time we'd see something like that at WSU.

Who knew Harrison was really just ahead of his time?

As the Cougars rolled out their re-branding effort (in conjunction with Nike) on Monday night, the Cougars unified their look once and for all. One uniform set in particular stole the show. So who better to model it than the current franchise player himself: Jeff Tuel. 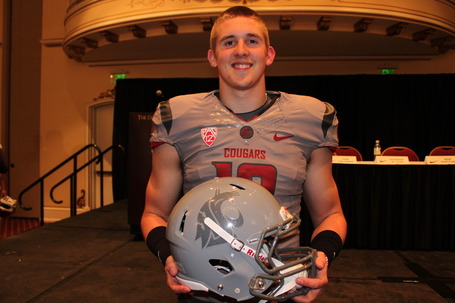 Ok, the helmet isn't white on gray... but it is gray on gray, which is close enough for me. A new Ghost Helmet - and a gray alternate jersey to go with it - have been born.

And kudos to the Cougars for embracing gray, which was a big theme in the re-branding effort. There's a term Paul Lukas of ESPN and other uni watchers use frequently these days: black for black's sake, or BFBS. Seemingly every school - regardless of what their actual school colors are - loves to rush out a brand new black jersey because... well, I don't really know why. I suppose it's because people like wearing black, and therefore are more likely to purchase a black jersey to take home with them at the end of the game. There's no better example of BFBS than your Washington Huskies, who take their already nauseating color combination and crank it up to the level of vomit-inducing. For the Cougars, crimson and gray actually look quite good with black. But the Cougars showed great restraint in avoiding black this time and adding a gray football alternate to go along with its basketball counterpart.

Crimson. Gray. Those are our colors, and they are finally the focus of what our athletic teams are wearing.

How did the Cougars do overall on their redesign? Besides the gray, I think there's one element flying under the radar that makes the new WSU look a winner. After the jump I grade out the whole re-branding effort, from football to basketball and beyond. 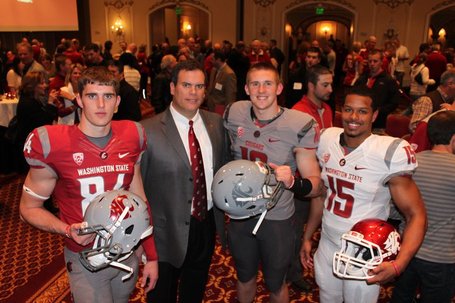 Primary Helmet: Let's start with the primary, which is very similar to our former gray helmets, with a couple exceptions. First, the helmet is matte gray, instead of the shiny silver-gray we're used to. The other change is a gray facemask. I always found it funny that a gigantic number of teams wear gray facemasks, even if gray isn't a school color. And yet WSU - who boasts gray as an official school color - was never one of them. Now we are. I'd prefer a crimson facemask, but in this case the darker gray doesn't detract too much from the overall look. Grade: A-

Alternate (Ghost Helmet): Let's be clear, this is a gimmick helmet. And even though it's a pretty cool gimmick, I don't expect it to stick around for very long. Just something interesting to show recruits right now. The only reason I even like it is that it's a (possibly unintentional) tip of the cap to Jerome Harrison. Grade: B

Crimson Helmet: This is the helmet that just won't die. This thing has been around since the Russell Athletic days, right on through the recent switch to Nike... and now the re-branding, even though there isn't a shred of gray anywhere on the helmet. It looks good with the road uniforms, however, and a red lid seems fitting for a state that is well-known for its apple production. But I still maintain it needs a gray Cougar head and/or facemask. [Unrelated note: I'm still holding out hope for a white helmet someday] Grade: B 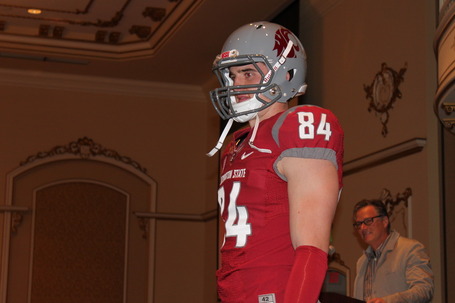 Crimson Jersey: This is - instantly - my favorite home jersey of all time. First off, I love shoulder stripes. Add to it that wonderful new number font (the new font appears to be a modified Agency FB Bold - more on that later) with white numbers and gray outlines and you have a winner. There's been an ongoing debate about whether WSU should put numbers or the Coug head on the sleeve. In this case, the numbers now look good enough to where I'm ok with them being on the side. After all, another Coug head would just be redundant when paired with the helmet.

Also, check out the collar area. You'll notice some heavy stitching, which is a Nike Pro Combat thing, and not really too big a deal. But what is worth noting is the beautiful new Pac-12 patch (Hopefully 16 someday) and a circular patch with the Cougar logo. It's a nice touch.

The only thing I'm not a huge fan of are the gray cuffs - those aren't really necessary in my mind. But they don't necessarily detract from the jersey either. Ultimately, I'd like to see this jersey stick around for a while. Grade: A

Gray Jersey: Congrats to WSU for having one crimson, but what happened to having just one gray?

I count four different grays here, if you include the helmet. The gray on the jersey, the dark gray shoulder stripes, the gray on the Cougar logo patch (and number outline) and the other gray on the Coug logo on the helmet. The facemask gray could even be considered a fifth. Yikes. Still, it is very hard to pull off a good looking gray alternate in football. The base color is always either too dark or too light, and it's hard to make the numbers stand out. Nike pulls it off here: they chose a good gray color for the backdrop, and the new crimson really stands out - especially with the dark gray outline. Gray overload aside, the shoulder stripes are a nice touch and will look good with the black pants. I actually think this might be the first replica jersey I buy from the new set, since I'm not really sure how I can justify to my wife buying another crimson jersey.

Overall, the gray jersey is unique, eye-catching and I have a feeling it will work very well with white or crimson pants. It's a hit. Grade: A-

White Jersey: Replaces our current set as my new favorite road jersey of all time. I even like the gray shoulder stripes, since it ensures both school colors are well represented. Make those cuffs white instead of gray and you have a perfect white jersey. Grade: A

Pants: The pictures coming out of the Spokane event haven't yet given me a good idea of how these will work. There's a Coug head logo up high on the side, and below the logo it appears there is a tapering solid stripe running up the side of the pants. I highly suggest going to the Cougfan gallery to get another look at all the jerseys, and it's in those pictures you can get a little bit of an idea what the pants stripe looks like. I do like the all the possible combinations WSU can use, as it appears we'll have gray, white, crimson and black pants to choose from. Overall, they shouldn't detract too much from the uniform, but they also aren't anything groundbreaking. Grade: Incomplete 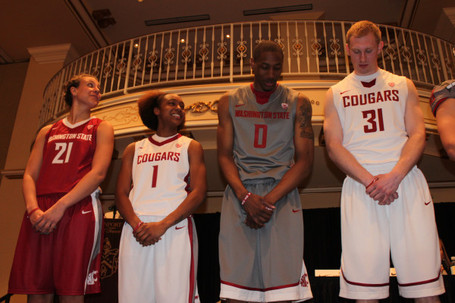 Men's Gray: I really hope this isn't a finished product. The overall design hasn't changed at all - the only thing that's new is the font and the fact "Washington" isn't above "State" anymore. Those two things are good, but the gray uniform is just begging for a white outline around the letters and numbers. Those stupid neck chevrons are back on both the white and gray jerseys, but at least the design of the shorts hasn't changed. Although I still don't understand why the bottoms of the shorts change to white instead of just having a solid gray all the way down. Grade: C

Men's White: Why can't we have the script 'Cougars' on the home jerseys? Does it just make too much sense? Only Nike would have a design element like that gift-wrapped for them and still screw it up (Actually, I shouldn't say that, especially after Adidas butchered my Sounders jerseys with shiny duct tape). Again, I still love the shorts, but the letters and numbers really need a gray outline. Grade: B-

Women's jerseys: That's as good a women's jersey as you'll ever see in this day and age. It even looks like they get outlined numbers, whereas the men didn't. More importantly, the ladies' crimson isn't maroon any more. Well done, Nike. Grade: A+ 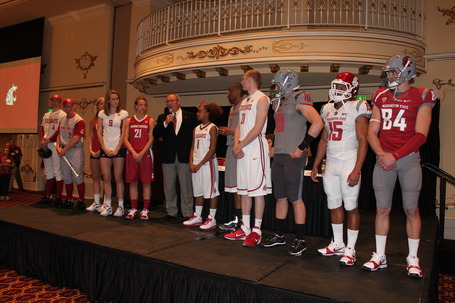 Baseball: It appears the jerseys are the same as the current ones... just with updated fonts. I need a better look to make a definitive grade. Perhaps we'll see them in the postseason? A man can dream.

In the meantime, I'll still hold out hope for a script jersey. Grade: Incomplete

Volleyball: Sure. I still feel bad about not paying attention to the fact Andrew Palileo resigned, even after previously winning a Pac-10 coach of the year award. However, our new coach is a Cougar alumnus, and recently took LCSC from also-ran to NAIA powerhouse. So I'm excited. The jerseys? Well... there aren't enough pictures to draw a conclusion. But Go Cougs. Grade: Incomplete

Overall Colors: The crimson looks good to me... and the gray is also just right for my liking. You don't want to get too dark, or else we start to look like one of the million red and black schools out there. Even though there is more than one gray floating around on the football uniforms, it seems pretty obvious to me which one the primary is. And it works. A good job by Nike, especially on the crimson. Grade: A-

Font: This is a big one. Remember when I said there was an element flying under the radar that makes this redesign a success? A good font doesn't draw much notice, but a crappy one can bring your school's entire identity down. Like I said earlier, this seems to be a modified Agency FB Bold with serifs on the leading number/letter. It's a great font. The new equipment truck gives you a good idea of the new wordmark:

Fonts are tough. Too much rounding makes a font look wussy, but you also don't want something trying so hard to be manly that it just ends up looking ridiculous. WSU got this one right. It's also tall enough to make 'Washington State' fit easily on a small amount of real estate. That's important. Be glad we didn't end up with a font like this, too. I would give it an A+, but sometimes one goofy looking number or letter can hurt a font. We haven't seen everything yet. Grade: A

Overall re-branding grade: A. Look, I could be overly critical, but do you realize how many professional organizations throw tons of money at a design and still screw it up? I'd take the Cougars' graphic design elemetns any day over about 75% of the pro teams out there, and I prefer them to the vast majority of college programs as well.

The only problem that remains is the million dollar question: now that we have the championship-caliber uniforms, can we actually win championships in them?