Ken Bone Cares Not For Your Preconceived Notions Of His Style

Share All sharing options for: Ken Bone Cares Not For Your Preconceived Notions Of His Style

When Jim Sterk hired Ken Bone away from Portland State to replace Tony Bennett, a lot of fans jumped to a lot of conclusions about just what kind of style Bone would bring to Washington State -- based mostly, I think, on his reputation developed as the presumed mastermind behind Washington's high-tempo offense while he was Lorenzo Romar's top assistant.

Most fans simply had a normal, healthy skepticism about the hire, which was perfectly reasonable -- after all, we've had precious little historical success in the program, and the recent success under a very specific system with very specific types of players made a pretty strong case for status quo. And Ken Bone was not going to be status quo.

However, there were a few doomsdayers out there who were convinced that this was the end of Cougar basketball and winning. The terms "run and gun" (along with its pejorative cousin, "rat ball") and "no defense" were thrown around liberally, as if Bone was going to walk onto campus and just roll the ball out and tell a roster built for Bennett ball to just "GO."

Beyond how stupid such a strategy would be, it also shows a fundamental misunderstanding of Bone in general. Whatever style box it is that people wanted to try and paint him into before his arrival on campus, it's now blatantly obvious that Ken Bone doesn't fit into boxes -- and I've got the numbers to prove it.

There are a handful of ways style manifests itself in a statistical profile, a couple of which we'll look at below. The biggest, of course, is adjusted tempo (number of possessions per game, adjusted for opponent). But it also shows up in other areas, notably the frequency of 3-point attempts, offensive rebounds, turnovers and assists.

To show you an easy picture of what this looks like visually, let's first take a gander at a coach you all are very familiar with.

Here's Tony Bennett's coaching resume, via Kenpom.com. First, the offense (click on it for a higher resolution version):

The colors are useful because they help you identify trends right away. The first thing you notice is the tempo (AdjT). In four of Bennett's five years, the adjusted tempo was between 58.7 and 60.8. Even his "blistering" pace of 63.0 in his first year at Virginia ranked just 317th nationally. Offensively, you see things like low turnover percentages (TO%) every year, low offensive rebounding percentages (OR%) every year, low free throw rates (FTR) in four of the five years, below average frequency of 3-point attempts (3PA%) in four of the five years and above average frequency of assists on made baskets (A%) every year.

None of this should come as a surprise to anyone who is familiar with the Bennett way. The offense is deliberate, functioning as much as an opportunity to rest from defense as much as anything else. Because the ball is walked up the court virtually every time, a low amount of turnovers is expected. Because getting back on defense and preventing transition baskets is a high priority, his team's don't get many offensive rebounds. And the motion offense doesn't lend itself to a lot of penetration or 3-point shots. 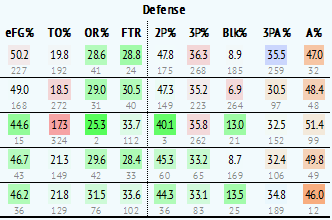 Again, trends are obvious. Superb defensive rebounding every year, very-good-to-excellent free throw rates each year, very low assist percentages every year. And, again, this all is what we would expect. Because the team isn't going to run out in transition, they're going to send five guys to the defensive glass. Because the pack-line defense is all about containing penetration, you'd expect them to allow very few free throws, and because it's also about keeping the opponent from getting easy baskets, you won't see a lot of turnovers either. (Although, it's nice to have this guy giving you a boost in that department through sheer skill.) I'm honestly a little stumped on how the Bennett defense limits assists, other than the fact that man-to-man defenses don't entice as much passing as zone defenses, but nonetheless, it's there.

One thing you'll notice is that I haven't talked about overall offensive and defensive efficiencies, shooting percentages or block percentages at all. That's because those generally have much more to do with talent than style. How often teams do certain phenomena is telling in terms of style; how often they succeed at it generally isn't.

Quite the contrast to Bennett, eh? Very few patterns here. His pace has ranged from 65.7 to 72.0 -- 202nd nationally to 24th nationally. The free throw rates have fluctuated wildly, as have the frequency of 3-point attempts and turnover percentages. About the only thing here that's reasonably consistent is the offensive rebounding (which was always above-average-to-very-good until this year), although his teams were above average on assist percentages until he came to WSU (something I'll attempt to explain momentarily). 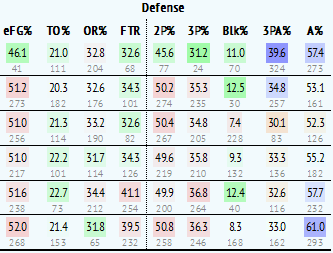 Again, loads of fluctuation. High variation in 3-point attempt frequency, assist percentages, defensive rebounding and free throw rate. About the only thing that's reasonably consistent here is the turnover percentage, which is generally right around average to above average.

So, what's the point?

Well, first off, I believe this variation is part of the reason why many WSU fans have failed to fully embrace Bone. Fans like things they can hold on to, things they can rely on. For six years, performance might have fluctuated, but the principles the program was built on never did. There's a certain comfort in that, especially when those principles have brought such unprecedented success. When change comes, it's a discomfiting feeling. That the previous regime's principles seem to have been replaced by no principles at all just compounds the confusion and frustration for a lot of fans, leading them to conclude that the coach actually has no idea what he's trying to do or trying to build.

I submit to you that nothing could be further from the truth with Ken Bone.

What Bone's statistical profile shows me is a coach who knows how to identify the strengths and weaknesses of his teams and tries to tactically maximize and minimize them. For example: Why do you think that assist percentage dipped the last two years? Well, when you've got a player like Klay Thompson who is your best shot at success every night, you're going to try and get the ball in his hands as much as possible.

Another example: When you have a team full of players who are long but don't necessarily have great lateral quickness, what do you do defensively? You go to a zone, which is exactly what he did almost exclusively this year. That results in a high percentage of 3-point shots, but it also resulted in the best team defensive performance of Bone's coaching career -- by a long shot. And if you're one of those people who wants to give all the credit to Ben Johnson for that, fine; I'll just go ahead and remind you that Johnson is a Bennett disciple who has spent his entire career teaching the pack-line defense.

It would be one thing if Bone's style profile was all over the place and his teams were terrible, which would suggest a coach grasping at straws. It's quite another when you're talking about a coach who took his previous school to the NCAA Tournament in each of his final two years and has just taken his current team on a deep NIT run.

And if you're still not buying this theory, I submit the UCLA game to you. Without Thompson and without Reggie Moore, Bone installed -- in about one day -- a high-post offense in the Princeton mold. If you don't know basketball strategy very well, you'll just have to trust me that it was a dramatic divergence from normal WSU offensive philosophy. It took the Bruins completely by surprise, allowing a severely undermanned squad to hang with the a team that two weeks later would annihilate Michigan State in the first round of the NCAA Tournament.

Which leads us to the most important question: How might Bone adapt his style to maximize the talent of this current collection of Cougars now that Thompson and DeAngelo Casto are no longer a part of the picture? I'll tackle that with my thoughts in a couple of days, but in the meantime, there's one thing I'd highly encourage you to do.

Think outside the box. Because if Bone has demonstrated anything over the past six years, it's that he is most certainly going to.