In what was an actual welcome piece of off-the-field news for Washington State University athletics, the football and men's basketball teams both posted improved scores Tuesday in the NCAA's Academic Progress Rate, with the WSU football team meeting the NCAA's minimum score of 925 for the first time in four years.

Basketball posted a score of 971, its highest score ever. Both scores mean neither program was subject to any kind of scholarship penalties. Women's cross country, with its 994, posted the highest score in the department for the fourth consecutive year.

The performance of football and basketball wasn't totally unexpected, as Vince Grippi had alluded to the fact that the athletic department expected to come out fine on APR. But for a fanbase that has been dealing with a fair amount of off-the-field embarrassment in the last 12 months, it's great to see that, overall, the school's two flagship programs are making strides in the classroom.

The APR is a four-year rolling score which measures how well individual teams do at retaining their student-athletes and keeping them on track towards graduation. Any team that dips below the threshold of 925 is in danger of losing scholarships, as the football team did in its nadir of 2006-07, when it posted a score of 916.

Here's a look at how the two programs have performed historically: 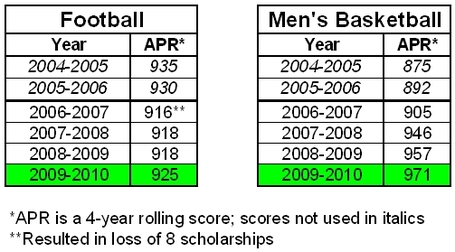 Both football and basketball had big holes created by Bill Doba and Paul Graham to dig out of, but while basketball is now well out of the woods, football is obviously still teetering on the threshold.

You'll note that football was below the 925 threshold the last two years but did not receive penalties; that's because the NCAA is most concerned with the trend of the scores and tends to withhold penalties if the program is making improvement. With that 916 dropping from the average next year, it's reasonable to assume football would once again be above 925 in 12 months because, despite how it seems, the program hasn't had a lot of defections this year.

Andre Barrington and Jamal Atofau come to mind, and Mark pointed out Terrance Hayward, who will be transferring. I couldn't really think of any others. Aire Justin is actually still on the team, just suspended, and Sebastian Valenzuela retired because of concussions. As long as both remain in school through the duration of their scholarships, I would assume they'd be treated just like every other player. And early word is that we won't have many -- if any -- academic casualties before fall.

It's also interesting to note that the mass defections in basketball last year don't seem to have hurt, thanks mostly, I'm sure, to that dreadful 892 dropping out of the average. For those worrying about the impact of losing Klay Thompson and DeAngelo Casto -- the latter of which may not have been on track to graduate, given that he did not finish classes in winter semester -- just remember that the 905 is going to be dropping off the average, too, so everything should be fine for them in 12 months as well.

Here's how the other programs performed (last year's scores in parentheses):