I remember the first game I attended at Martin Stadium. It rained, I snagged my jacket on the old chain link fence entrance and I missed half of the second quarter waiting in line to use a portable toilet.

Based on the new renderings of the next phase of the Martin Stadium remodel, I think my first experience at the new Martin Stadium might be a tad different. 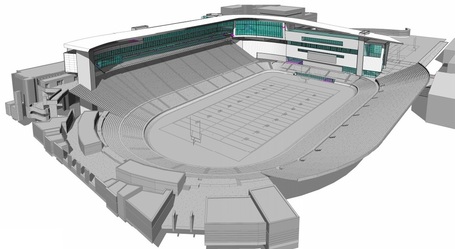 I never knew a mostly gray rendering could look so good. Not only is this a massive upgrade over the current facility, it is also a considerable improvement over the original phase three design. The new rendering shows an upgraded press box, luxury seating and the new 100000-square-foot football operations building. The scoreboard would presumably remain in the same place as it is now, or it may attach to the football facility.

Compared to the original phase three design, you can see the improvement from isolated luxury seating area to a complete facility. 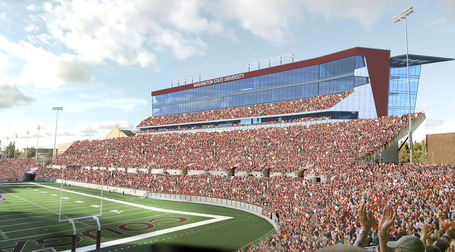 Here is the view of the new facility from Rogers practice fields. The ground level entrance to the facility will feature a much-needed WSU Athletics Hall of Fame and as a hall of fame junkie, I have to say this may be my favorite aspect of the new facility.

Now a look as if you are viewing it from the intersection of Stadium Way and Wilson Street. If I remember the current structures correctly, this looks mostly the same with the top of the new press box area now visible.

The renderings are quite impressive, but I think I may have discovered one major fault in the design. 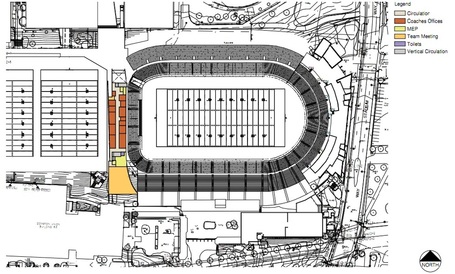 As you can see from the key, this floor of the football facility will house all of the coaches' offices. The problem, however, is it also contains a mere one bathroom. I wouldn't want to be any of the other coaches on gumbo day at the cafeteria.