We occasionally like to make a little light around here in reference to just what WSU Athletics Director Bill Moos might do with all that cash that's about to drop into his lap, but now that we've got some concrete details, it's time to actually take a serious look at what the Pac-12's TV contract means for WSU.

In a word? Facilities.

With the lowest athletic department budget of any school in the current Pac-10 -- by about $20 million. That relatively miniature budget is why this television contract will likely benefit WSU more than any other school in the new conference, save for Utah, which hit the NCAA's version of Powerball.

WSU has a lot of catching up to do, something Moos was keenly aware of when he took the job a little over a year ago. Any good leader has a clear vision for what he wants to do with his organization, and Moos has been consistent in his message about how WSU will catch up since he took over. From his introductory news conference on Feb. 25, 2010:

"What (athletes are) looking for -- to their credit -- when they're that good to be recruited in the Pac-10, is, 'What have you got for me that in four or five years will allow me to reach my potential and get me to where I want to go?' And you better have that answer. Because if you don't, the guy down the street will.

"And that comes around to facilities. How are you going to get them stronger, faster, more agile? Where are they going to go to train around the entire year? What have you got in regards to video equipment for them to study their performance? What have you got for locker rooms?"

The tune hasn't changed now that he's about to actually have the cash in his hands to make it happen. From an interview on KJR 950-AM with Ian Furness on Wednesday:

"We're going right to facilities. We're on the design phase approved by our board of regents of a $75 million renovation and expansion of Martin Stadium, along with a 100,000 square foot football operations building. That project is going extremely well. We just took a tour of six BCS schools two weeks ago to look at what they have in that regard.

"We have work to do in Beasley Coliseum and our baseball facility and soccer and so forth. We want to get all of those up to speed, again, to help us in our recruiting. If we can get the very best talent to Washington State, then we can start to fill our seats and create revenue streams that are above and beyond that television money."

If you're wondering just how much of that $75 million tab is going to be picked up by television money, I don't have a firm answer for you. But when you look at the timeline on the proposal that will be presented as a future action item to the Board of Regents' Finance and Audit Committee meeting Thursday afternoon -- the same document that contains the renderings Mark profiled here -- it's clear that it's a driving force behind the plan. 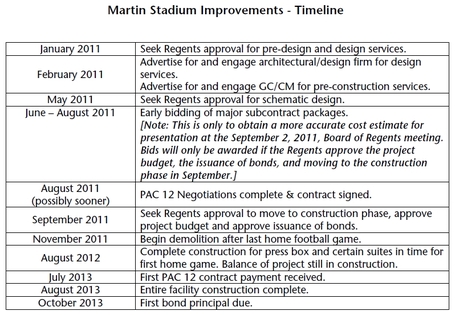 It's highly unlikely the TV money will pay for all of this project. While the deal averages out to just under $21 million a year over the life of the contract, it's going to start out at about $15 million to $16 million in the first year and escalate from there.* If every penny of the TV money went to the project, it would take about five years' worth of the revenue, longer if some of that money was earmarked along the way for other projects.

*Of course, Pac-12 Network revenue will be on top of this. We just don't yet know how much that will be, so I'm leaving it out for now.

In short, while this is a great jumpstart to these projects, it's not going to recuse fans from carrying their share of the load, a message Moos is already trying to spread. Again, from the Furness interview:

"Now, the one thing that our fans have got to realize is that this does not provide an opportunity for them not to be involved. We need to have our fanbase grow. We need season ticket sales. And we need to increase our donations. We're going to be able to at least make sure that all of our programs are healthy and that our recruiting budgets and salaries and so forth can be competitive."

So, while this TV contract is an enormous pick me up for the entire department, it's not the holy grail, and a notoriously tight-fisted fanbase still needs to get real comfortable with the idea of opening up its checkbooks. We need to start thinking bigger. Facilities that rank behind our peers isn't our only problem -- recruiting and keeping top coaching talent also is, as we know all too well.

Moos also talked about the exposure that would come for the university, and that's a nice fringe benefit. But this is all about money, and that money is going to allow WSU to significantly narrow the gap between itself and the rest of the conference.