'Undefeated Fans' Wants You To Design A T-Shirt

Share All sharing options for: 'Undefeated Fans' Wants You To Design A T-Shirt

Undefeated Fans -- the campaign by the WSU Athletic Department to promote and recognize the passion of Cougar fanatics through the creative display of WSU flags -- announced today that it is holding a contest to determine the design of its official t-shirt.

Lest you think the glory of being picked as the winner lies simply in seeing your design potentially worn by thousands of people, the winner also will receive two season tickets for this upcoming football season.

There's only one catch. Your design has to incorporate the following logo: 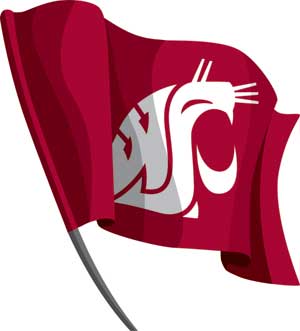 If you think you can make that happen, submit your design (in a ZIP file) to athletics.marketing@wsu.edu by June 20 -- that's Monday. Someone in the athletics department will pick the top five, and then fans will vote on those from June 22-29 to determine the winner.

In the meantime, you can visit WSUCougars.com to participate in a vote as to whether the shirts should be crimson or gray. This seems like something of a no-brainer, since I can't imagine crimson on crimson being a great option. But since crimson is currently beating gray 2-to-1, it's clear I have no fashion sense whatsoever.

I am, however, going to try my hand at the design, because who knows? I met get some tickets out of the deal.