WSU BASEBALL: What Went Wrong In 2011? Part 1 - It's Probably Not What You Think

Share All sharing options for: WSU BASEBALL: What Went Wrong In 2011? Part 1 - It's Probably Not What You Think

With the first pitch of the championship of the College World Series set for tonight, now's a good time to take one last look back at WSU's baseball season to try and figure out just what went wrong for the Cougars, who fell far short of their expectations in 2011.

Periodically throughout the year, coach Donnie Marbut took issue with his team's attitude, leadership and preparation. He said the Cougars "embarrassed" themselves after the Fresno State series. He also repeatedly questioned his team's intensity, saying they "lacked urgency," and questioned whether he'd gone too soft on them in practice.

Marbut's a baseball man through-and-through, so it's not surprising that he regularly looked to intangibles to explain just how it was that a team that had its sights set on Omaha and the eight-team CWS couldn't even get into the conversation for a third consecutive regional berth.

But we like things more concrete than that around here. That's not to dismiss what Marbut said -- he's a highly successful baseball coach who has won games with his philosophy, and if he says this year's team wasn't as focused or intense, then I believe him.

However, we can't measure those things. And since we don't watch them practice, we don't know their personalities or work ethics, which means we'd just be aimlessly speculating. If you've been around here for any length of time, you know we avoid that as much as possible.

So, we're left with statistical analysis to shed some light on what went wrong and offer at least a partial explanation of why it happened. But much more than some sort of second-rate substitute, the stats paint a very clear picture of what happened this season. And the conclusions might surprise you.

As a wise man once said, baseball is a pretty simple game -- you throw the ball, you catch the ball, you hit the ball. (And sometimes you win, sometimes you lose, sometimes it rains. Think about that.) So when looking for an explanation of where this all went sideways, most people will start simple. They'll do something like this:

Easy, right? The pitching got a little worse, the fielding was about the same, but holy cow, that offense! Wow, did it get way, way worse, scoring 1.4 fewer runs per game! That's the simple explanation for how you go from 37-22 and one win away from a Super Regional to 26-28 and out of the postseason all together -- the terrible offense.

But it's really not that simple. All statistics are contextual, and there's one major piece of context missing from this evaluation: The offensive environment the Cougars played in in 2011 was very, very different from 2010, thanks to the NCAA-mandated implementation this year of BBCOR-tested alloy bats. You can read all about BBCOR testing here, but in short, the new bats have a smaller sweet spot, less of a "trampoline" effect on the ball, and are weighted differently.

The difference -- across all of Division I NCAA Baseball -- was dramatic. Teams scored just 5.6 runs per game in 2011 after scoring 6.9 runs per game in 2010. Both home runs and hits in general were down this year. Here are a couple of pretty pictures to illustrate the point, via this incredibly informative and fascinating analysis from Kettering University physics professor Daniel A. Russell (he also explains the various peaks and valleys you see): 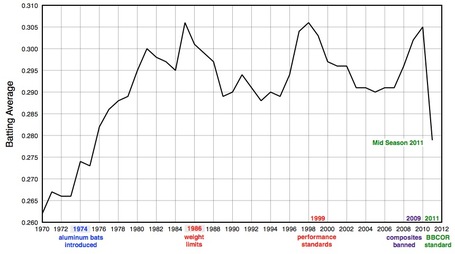 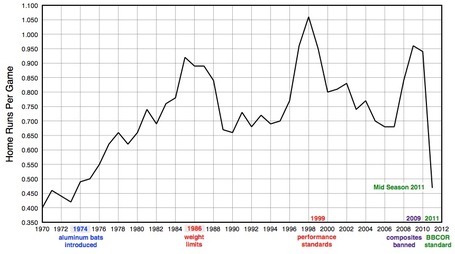 Offense didn't just dip in 2011 -- it dropped to near wood bat levels from nearly 40 years ago, making comparisons between 2011 and 2010 not just apples to oranges, but more like apples to lettuce. (Or potatoes, or some other thing that's still produce but pretty much nothing like fruit).

There's a way, though, to make it apples to apples. A favorite stat of sabermetric types is wOBA, or Weighted On Base Average. You can read about it here in detail from the guy who created it, the inimitable Tom Tango, but it's most easily understood as a weighted combination of on-base percentage and slugging percentage -- a more refined and accurate version of OPS, if you're familiar with that stat, where each "event" (e.g. single, home run, walk, etc.) is assigned an environment dependent run value (e.g. a double was "worth" approximately 1.08 runs in 2010 in that you'd expect a double to generate about one run for an offense).

Thanks to this handy dandy wOBA calculator from JT Jordan at The Hardball Times (for which I am eternally grateful because there's no way I would have made this myself) using Boyd's World's comprehensive Division I baseball data, we can figure out the relative weights in both the 2010 and 2011 environments and come up with some adjusted figures for the WSU offense that can be compared from one year to the next. Because it's adjusted, keep in mind that a .330 wOBA is average for both 2010 and 2011, despite the different environments.

But before I get to those results, here are a few other stats I'm going to post in the table below next to wOBA that are just different variations of the same calculations which provide different perspectives on the data.

Before looking at the table, remember that the 2011 offense was 1.4 runs per game worse than 2010. Ready to have your mind blown?

If you're rubbing your eyes thinking there must be some mistake, no, your eyes do not deceive you. The 2011 offense was actually better than its 2010 counterpart. Eight percent better, actually, as the 2011 edition was basically an average Division I offense in this suppressed environment.

Other Cougar bats that performed just fine? Believe it or not, despite a bit of a power drop from last year, Jones' wOBA was only two points worse this year. You'd expect a guy to improve from one year to the next, but he didn't get worse, despite what his non-adjusted stats are telling you. And Matt Argyropoulos was huge at the plate, improving his wOBA from .286 in 2010 to .347 in 2011 despite a late-season slump. Ard and Argyropoulos more than made up for the drop of Cody Bartlett, who saw nearly all of his power disappear as his wOBA dropped from .345 to .323.

The most interesting thing I find about this was that WSU was able to be so successful in 2010 with such a decidedly below-average offense. And there's actually a fairly easy explanation for it. First, the numbers. Remember, wRC is what a team would be expected to score based on their total amount of each event:

While the 2011 WSU offense performed almost exactly right in line with what you would expect, the 2010 edition actually outperformed its expected run production by a whopping 36 runs over the course of the season -- or .6 of a run per game. Those above-average results masked actual hitting deficiencies and allowed it to power a deep postseason run.

There are all sorts of theories as to why were the 2010 Cougars able to outperform their expectations while the 2011 Cougars were not, ranging from base running to Marbut's intensity/focus/urgency/execution to my personal conclusion and the bane of every athlete's existence, luck.* But that's not really germane to this conversation.

*If you're interested in exploring the 2010 team further, I posted about 500 words in the comments that were left on the cutting room floor from this piece. Check it out.

What is important to note is that the 2011 Cougars were basically an average offense, which is more than the 2010 Cougars could say. And the 2010 Cougars advanced to within one game of the Super Regionals, so there's just no way you can say the offense was what was holding this team back this season. While WSU's numbers were down, so were everyone else's, and the Cougars' run scoring output was such that they should have been able to win a greater amount of games in this environment.

So what actually went wrong? If run scoring is one side of the coin, run prevention is the other. And you'll see just how bad the run prevention was in 2011 in part two tomorrow. And believe me -- it was bad.

If you want to explore all the offensive stats yourself, I've uploaded them to Google Docs here. Have fun.