WSU's Practice Gym Gets A Facelift

Share All sharing options for: WSU's Practice Gym Gets A Facelift

As fans, we pretty much only see the rebrand of the WSU athletic department in our teams' uniforms and playing surfaces. But when athletics director Bill Moos took over, he talked about remaking the entire department in the mold of Oregon, where a consistent WSU "brand" would be everywhere throughout the facilities.

Now that the brand has been established, that facelift is starting to take place behind the scenes, as you see above.

A couple of days ago, some athletics department employees sent out a few pictures via Twitter of the remake of the basketball teams' practice gym. For those of you like me who graduated before the Rec Center was built, this is the old double gym in the PEB by the swimming pool where we used to play pickup games.*

*My claim to fame is that I once played there with Isaac Fontaine and after passing to him repeatedly because I was afraid to shoot, he passed me the ball and told me to shoot. ME! I made the shot -- at least, that's the way I remember it ...

Moos has made it his mission to change the culture of WSU athletics, and this is another part of that. For as proud as we all are to be Cougars, there simply wasn't a lot of this sort of stuff around the facilities when I was in school. As an athlete, it's a lot easier to envision yourself as a champion when you feel like a champion. Uniforms and facilities -- even if it's just a paint job -- help with that.

Check out some more pictures after the jump.

EDIT, 4:15 p.m.: WSU Sports Information put out a release shortly after I posted this, and it has a much more comprehensive gallery. You can view that here. 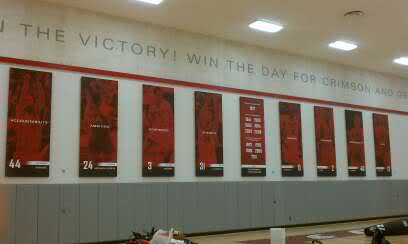 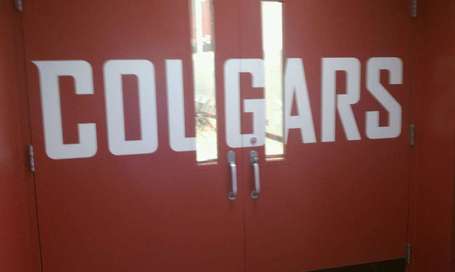