WSU Vs. UNLV: Defensive Pressure And A New Identity

Share All sharing options for: WSU Vs. UNLV: Defensive Pressure And A New Identity

The Washington State Cougars' defense is beginning to develop an identity that looks nothing like the past two season. The days of sitting back in zone coverage and keeping everything in front are gone, at least for the moment. In their place, a defense that brings pressure from all angles, early and often.

One play described the defensive philosophy in a nutshell on Saturday. In the second quarter, UNLV faced fourth and nine from the WSU 28. At the time, the Rebels were down 28-0, and were left with no choice to go for it. But WSU had an answer, as it did all day.

The Cougars lined up in the stack, with three down linemen, three linebackers and five defensive backs. While WSU spent most of the day in a 4-3, the 3-3-5 made its triumphant return in passing situations. Think of it like a nickel package, but instead of replacing a linebacker with a defensive back, a lineman is replaced. This says a lot about what defensive coordinator Chris Ball thinks about his backers. 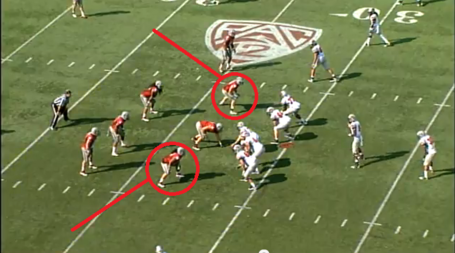 Toni Pole and Travis Long don't commit to a three-point stance, and instead stand with their hips open to the outside. Both players are showing they're going to drop into coverage, which begins the fun.

As the ball is snapped, this is what the alignment looks like. 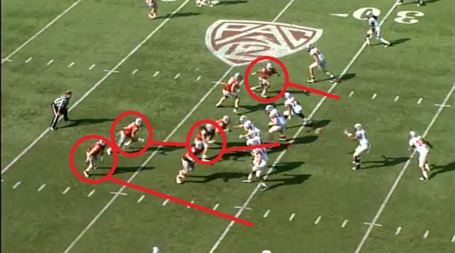 The circled players are all coming on what is, essentially, a house blitz package. Sekope Kaufusi times the snap and drops into the gap in front of CJ Mizell. On the outside, the nickel back -- I believe Anthony Carpenter -- comes off the edge, also timing the blitz. Mizell and Alex Hoffman-Ellis are coming on a bit of a delay, with the former following Kaufusi.

The beauty of the play is the following picture. 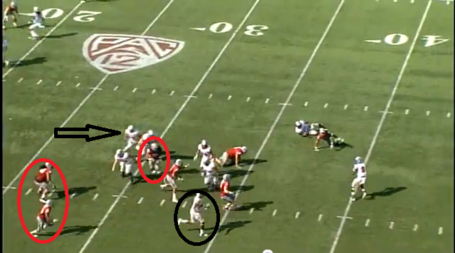 The receiver circled in black is lost. He's about to help Hoffman-Ellis pressure the quarterback.

Travis Long is 15 yards downfield and out of the frame covering the slot receiver. Pole, circled in the bottom-left corner, is sitting in his zone with flat responsibility. Anthony Laurenzi blew up his man, Carpenter absorbed a cut-block and Alex Hoffman-Ellis is free.

But notice the running back, who has leaked out. Now notice Kaufusi, circled in red in the middle. He begins the play by taking on blockers, opening a hole for Mizell. Now, he's read screen and is shadowing the running back. This is a smart play.

The blitz gets home easily as Alex Hoffman-Ellis hits the quarterback just as he releases the ball, with CJ Mizell and Anthony Carpenter both nearby in support. The result was a ball that was nowhere near any eligible receiver and a failed fourth down conversion. 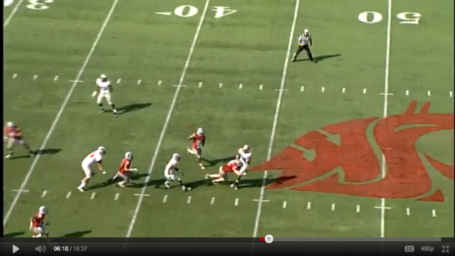 As an aside, Toni Pole ran a guy over to ensure the play was blown up, just for good measure. He did that all day.

The play was a screen and Chris Ball dialed up the perfect playcall to counter it. The blitz package was designed to confuse, and the play was snuffed out from the start. With so many bodies flying around, UNLV had nowhere to go, resulting in a pass that was thrown away and a turnover on downs.

With fast linebackers and versatile ends that are athletic, Ball can dial up a variety of different packages to bring pressure from all angles in an effort to confuse. It worked all day on Saturday, just as it did in Week 1. And boy was it fun to watch.