We were robbed of the Toni Pole experience last season, but it may have been for the best. The Washington State defensive line could've used Pole, but after a year out of action and a redshirt, the second-year defensive lineman is already having quite the impact. And if the past two games are any indication, Pole has a chance to be a dominant force on the Cougars' defensive line for quite some time.

Through two games, we've already seen what Pole is capable of, at least in some form. Against Idaho State, the Cougars stayed in a 3-3-5 for the entire game, with Pole on the outside as a defense end, Travis Long on the opposite side and Anthony Laurenzi in the middle. The next week, as the Cougars took the field against a run-heavy UNLV team, Pole slid inside, working out of the defensive tackle spot in a 4-3 alignment.

Pole is big and strong enough to play inside, yet quick enough off the ball to rush from the edge. As we explained earlier, he's also able to drop into coverage from an end spot. Thus far, Pole's versatility has been a fun revelation for the Washington State defense.

As an example of what Pole is capable of, here's a fun picture. 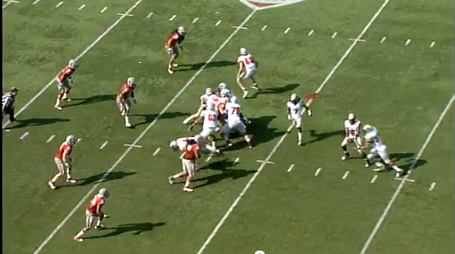 Working from the end spot, Pole fakes like he's about to engage his man, gives him a quick side-step and swim move, and watches him fall. The guy you see looking at the turf next to Pole is actually looking for his jock. He finishes the play by dropping the running back for the loss on the other side of the formation. For a 300-pound guy, Pole has surprising athleticism and quickness -- he used to play basketball in high school, as well; imagine that freight train barreling down the court.

Through two games, the Washington State defensive line has been a huge bright spot. After a disappointing 2010 campaign in which the line and linebackers were ineffective for the most part, we weren't sure what to expect heading into the season. What we've seen is a line with the ability to hold its ground or get a push, freeing up the rest of the defense to make plays.

Granted, the level of competition has been far from stellar, but UNLV has a competent offensive line and rushing attack. And Pole, as well as the rest of the defensive line rotation, made it look downright silly.

So why the King Kong reference in the headline? Press play and watch Pole.

I half expected him to end this play by beating his chest and swatting a plane out of the air. Pole repeatedly shucked offensive linemen to the ground as if they were annoying flies that needed to be flicked away. Pole's strength, speed and versatility create a difficult matchup, and the Cougars are better for it.