Share All sharing options for: The WSU Football Rebuild And Its Progress Through The Lens Of The Process

We're big fans of process-based analysis here, and believe it gives us a more accurate view of what's truly going on. The end result only means so much, and making decisions solely on it doesn't paint a full picture. Instead, looking at how the result came about -- picking apart the series of events leading up to it -- allows us to diagnose the cause and examine what's going on beneath the surface.

There's a favorite photo of mine that explains process-based analysis and how it relates to results. 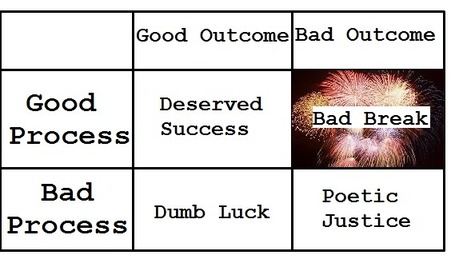 The theory is that if a process is true, the results will inevitably follow. Of course, with so many variables, it's far from concrete, but more often than not success should follow if the process is laid out and implemented correctly. So we spend our time looking at what comes before the final piece of the puzzle.

This whole series was a look at a process of rebuilding the Washington State football program, purposely ignoring any results we've seen on the field to cut out noise. Unlike most of our analysis, which looks at small moments in time -- 40 or 60 minutes a week, perhaps more -- rebuilding a program is far from finite. We're three and a half years into the rebuilding effort and it's still in progress, something everyone associated with the team readily admits.

In a way, rebuilding a program never ends. It's a constant battle to implement philosophies, instill values and keep the program on the right track. With 25 or more players joining the family each year, the process grows and evolves at a near-constant rate. Unlike a game, overseeing a program is never-ending, and is the true test of a coaching staff.

We've examined the process, its implementation and examined a checkpoint along the way, casting aside any on-field results we've seen thus far -- yes, even the 2-0 start by way of a couple blowout wins. All of this is in an effort to paint a complete picture of where the program comes from, where it's at and, perhaps, where it may be heading. By taking a microscope to what goes on before the Cougars take the field, it gives us a better idea of why we see what we do on Saturday.

But I'm not going to go all Dayton Moore and ask you to, "Trust the process." Instead, I want you to do the opposite. Question whether the route Wulff is taking is the correct one. Look beyond the wins and losses, and hone in on what's going on outside of a few hours each Saturday in the fall. After all, a program is bigger than just the small fraction we see on the field.

Wulff torched the program to clean house and start anew, hitting the reset button when faced with what he felt was a program beyond simple repair. The well was poisoned and simply try to fix what he had was no longer an option. So he flushed it.

After the program was cleaned, the work began. A foundation was laid, with the coaching staff preaching family and trust, using the former as the main recruiting pitch. Players were brought into the fold knowing what lied ahead and became a part of this large rebuilding process. Now, three years later, the program is full of Wulff's players, who are buying what he's selling.

Along the way, the program has been tested, most notably in 2010. There were setbacks and slip-ups off the field, and a player who became what I felt was a measuring stick. If C.J. Mizell could buy in and if the coaching staff refused to bend its values for a player who could provide an immediate boost to the program on the field, perhaps things were headed in the right direction.

Yet we still don't know. From being around the program, it sounds and feels like the team has bought in and is drinking the Kool Aid. But what if they're following the wrong process? What if, instead of marching towards an oasis, the Cougars are walking blindly towards a cliff?

This is why we question, ponder and dissect. We search for meaning and answers while drawing upon what our eyes and ears tell us. And yet, in sports, there's rarely a definitive answer or a widespread consensus.

The question you should ask yourself is not whether the Cougars are improved simply because they've blown out two teams to open the year after showing signs of life last year. Instead, look at the process, the values and the foundation of the program. If these pieces of the puzzle are in the right places, success should follow, and the program will be better because of it.