Nobody wants to think about a tough loss, including myself. It never feels good to watch everything come crashing down in a game most felt the Cougars could win. So we're going to ease into the analysis by looking at the greatest play in football: four verticals.

Washington State, like almost every team in the country, utilizes a script to open the game. It's about 15 plays, all put together in advance and prepared to open the game. The script is run in order, and is a way to, hopefully, get off to a fast start. The offense drills the script, knows exactly what's coming and has time to polish the plays in the week leading up to the game.

In the first two games of the season, the script began with a basic play. Against Idaho State, Marshall Lobbestael handed the ball to Rickey Galvin on a simple dive. In the second game of the year, it was a bubble screen. Nothing ground-breaking, and certainly nothing aggressive.

Against San Diego State, the script started with a bang. Washington State came out in 10 personnel, with three  receivers to the wide side and Jared Karstetter alone on the short side of the field. If San Diego State looked at tape of the first two games, it'd probably expected a simplistic, safe play to open the game.

Instead, the Aztecs were hit with the greatest play in football, and it nailed the prom queen again, as it always does. 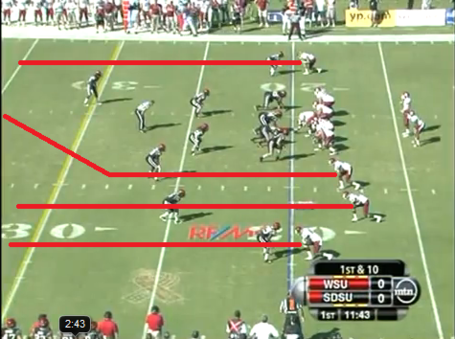 Karstetter lines up alone at the top of the screen, Kristoff Williams is at the bottom, Marquess Wilson is just to his inside and Isiah Barton is lined up closest to the tackle. All four wide receivers are going vertical.

As you can see from the picture, this is like taking candy from a baby. The two corners on the outside are in press, with two defensive backs inside playing seven yards off. The safety is in centerfield, shaded a bit towards the short side of the field, which is a bit odd.

Three receivers run fly routes while Barton runs more of a post. His route is designed to hold the safety, giving Williams and Wilson one-on-one coverage. 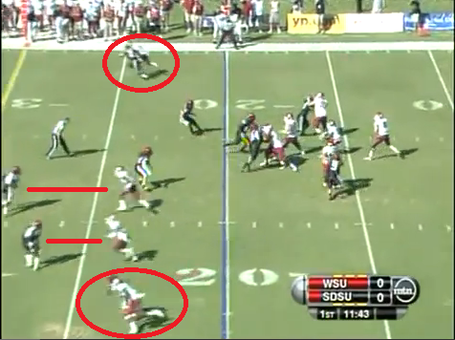 The ball is snapped and the safety begins his backpedal (out of the screen). The defensive backs are all in man, and it's not even fair for them. You can see the two corners running with Williams and Karstetter, circled in red. On the inside, Wilson and Barton are running free already, and only have their man to beat.

So did Barton's route work, freezing the safety long enough for Wilson to gain separation? 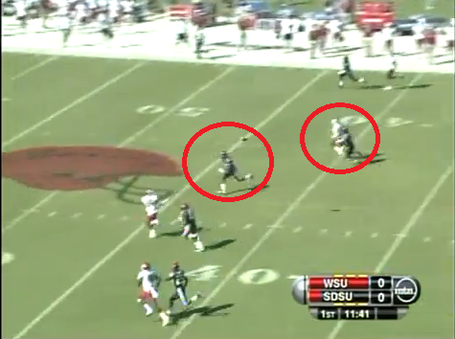 Barton is circled in red in the top-right corner, the safety he held is in no-man's land and Wilson has separation. This one is all over, and WSU took exactly one play -- its first play from scrimmage -- to go 80 yards for the score, leaving the prom queen with a present in the process.

Of course, it wasn't all sunshine and lollipops on Saturday, but the first play from scrimmage got the Cougars started on the right foot. It was aggressive, took advantage of the defense and run to perfection. If this were a video game, WSU would've just run four verticals every play, scoring eleventy billion points in the process.