One of my favorite features of SB Nation is the photo tool. Anytime an author writes a post, they have access to the AP and Getty photo wires. It's a great tool to have, except when there are no games for months and the default photos never change.

For the last few months, I have stared at the same 12 photos every time I attempted to write a post. There will be new pictures soon, so before they go away, I decided to finally figure out what is going on in the photos I have spent so much time starring at. 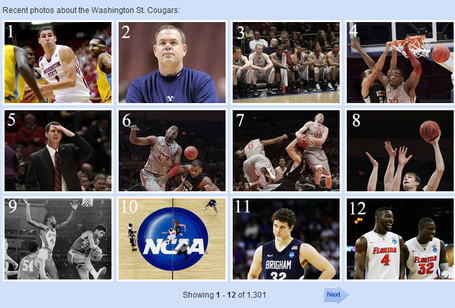 2. For months, I've wondered what the heck Dave Rose was starring at in this photo. Probably cheerleaders. So much for the honor code.

3. I've erased the memory of why the bench looks so depressed. Let's move on.

4. DeAngelo Casto attempts to tell the backboard to, "talk to the hand" but some fool gets in the way.

5. Ken Bone searches for the peanut vendor at MSG. Those roasted nuts sold on the streets of NYC are indeed delicious.

6. Here, Casto is practicing his "Thriller" dance moves while also serving up a self inflicted junkpunch. I'm going to miss that guy.

7. Seconds before this, the Wichita State guy told Marcus Capers the sky was not blue. Abe Lodwick saved his life by pulling him to safety before Capers landed a superman punch. Abe Lodwick is a hero.

8. This guy is really good at monkey in the middle.

9. Random picture of Kareem Abdul-Jabbar when he was named Lew Alcindor. Okay then.

10. Thing #98745 wrong with the NCAA, they insist on putting that hideous blue circle logo everywhere.

All football all the time

Pre-season position primer - The defense - WSU Blog articles - MyNorthwest.com
Don't look now, but we're a mere three days from the 2011 season. Summer slipped away pretty quickly, and for those of us on the westside, it never really happened. Because of this, I'm condensing my position break-downs and just putting all of the defense in one, complete, awesome, enthralling post (I really am my biggest fan).

Scout.com: Wulff: 'Unknown' is biggest concern about ISU
WELCOME TO WASHINGTON STATE -- home of the unknown. At least that was the feeling expressed by coach Paul Wulff during his Thursday teleconference regarding Saturday’s home opener against Idaho State at Martin Stadium. That is because the Bengals feature a new coach Mike Kramer, who served as an assistant to the director of football operations under Wulff last season.

WSU’s Hoffman-Ellis has the quickness to make up for lack of experience - Spokesman.com - Sept. 1, 2011
PULLMAN – When Alex Hoffman-Ellis committed to Washington State in the summer of 2008, information about the Moorpark College freshman was hard to come by.

WSU/Pac-12 story lines - Spokesman.com - Sept. 1, 2011
The first year of the Pac-12 doesn’t seem to be fair or balanced. In the North, there’s Oregon and Stanford, ranked third and seventh in the nation, respectively. In the South, there’s USC, Arizona State and a bunch of question marks. But the Trojans, ranked 25th, are ineligible for the first Pac-12 title game Dec. 2 and ASU has been racked by injuries.

Bud Withers | Cougars' B.J. Guerra has lived through coaching change from Bill Doba to Paul Wulff | Seattle Times Newspaper
By now, Washington State football partisans have had such a snootful of losing, there's only one other topic that wears them down as much: Whether their three-year malaise is more the fault of Bill Doba or Paul Wulff.

Healthy Long ready to get after it for WSU " Kitsap Sun
PULLMAN — Travis Long, simply put, is one tough hombre.

watch-110901 - Pac-12 Blog - ESPN
7. Cougars grinning: Washington State is going to beat Idaho State. Not a big deal. What's a big deal is being 1-0 for the first time since 2005. What is a big deal is a team getting some early momentum, which it hasn't had in in coach Paul Wulff's first three seasons. The Cougs need to go out and pound on Idaho State. They need to walk away feeling good about themselves.

This is probably hair-splitting of Miami-cheating proportions, but it’s time for federal regulation of the surprise team industry.