I'm still in the midst of charting Saturday's game -- in fact, it's slower going than I thought it would, but I'm getting lots of great information -- but I wanted to pass along something I saw that I thought you all might enjoy.

A couple of days ago, Brian showed you how the Cougars scored on the first play against San Diego State using the greatest play in football, four verticals. Not too long after that, WSU used the success of that first play to its advantage.

Its the second play of the second drive -- after a three-yard run by Rickey Galvin, it's second-and-7. It's also the very next pass play after four verticals burned the Aztecs. Here's the setup.

WSU is in 10 personnel -- one running back, zero tight ends, four receivers -- with three receivers to the wide side of the field. It's the same setup as the opening touchdown. But instead of all four receivers going vertical, only three do. The fourth, Isiah Barton, runs a little crossing pattern (I apologize in advance for the quality of the images -- I had to take pictures of my TV): 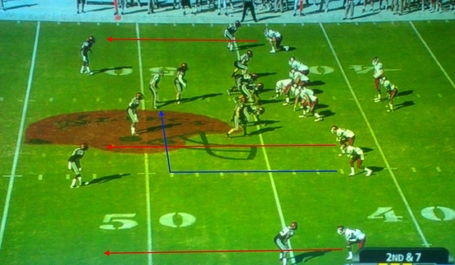 The response of the defenders is perfectly predictable.

The corners, playing press coverage, run with Jared Karstetter (top) and Marquess Wilson (bottom). The linebackers and safeties, seeing the streaks again, all bail. That leaves a pretty enormous open window in the middle of the field. 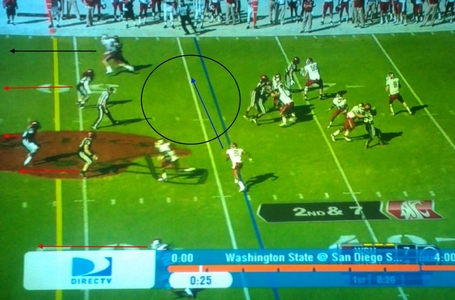 The result? SDSU is so afraid of getting beat deep again, there's nobody within five yards of Barton when he catches the ball:

With no defender around and a head of steam, a pass caught four yards from the line of scrimmage turns into a 14-yard gain. It's a great example of how offensive coordinators build off of core concepts in an effort to stay one step ahead of the guy on the other side of the field. It's not rocket science -- a simple tweak of the simplest pass play in football took advantage of a defense afraid of getting burned again to pick up a nice gain on a short, safe throw.