Marquess Wilson's Second Half Touchdown: When The Outside Screen Works To Perfection

Share All sharing options for: Marquess Wilson's Second Half Touchdown: When The Outside Screen Works To Perfection

Early in the third quarter of Saturday's game against San Diego State, the Washington State Cougars were clinging to a three-point lead in what had been a back-and-forth game. The Cougars took possession at its own 22-yard-line, and, like they did on the first play from scrimmage, struck quickly, finding the end zone with one big play. While the play, a screen to Marquess Wilson, was a superb individual effort, it was also the perfect call against the defense San Diego State was showing.

On the play, San Diego State sent the house, rushing all six players who had lined up in the box. The Cougars were in 10 personnel, with two wide receivers in tight on the short side of the field and two spread apart on the wide side, with Wilson on the outside. The spread look, in addition to the playcall, made this whole thing go.

Here's what we saw before the snap. Wilson's route and Bobby Ratliff's rub are noted, and the box at the center of the screen is where the open space will be following the blitz. 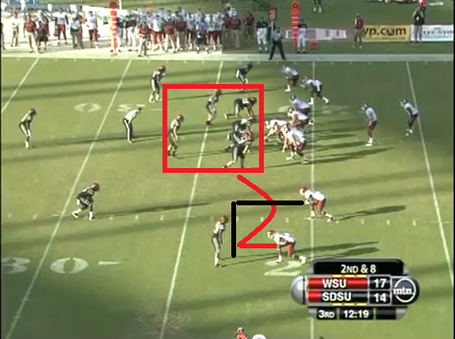 As the play begins, all six players in the box come upfield. Five are rushing the passer, one is shadowing Carl Winston. The corners on the outside are in press, with the defensive backs on the slot receivers playing off. This leaves Bobby Ratliff free to rub Wilson's defender on one side and Isiah Barton free to set up a block on the other. 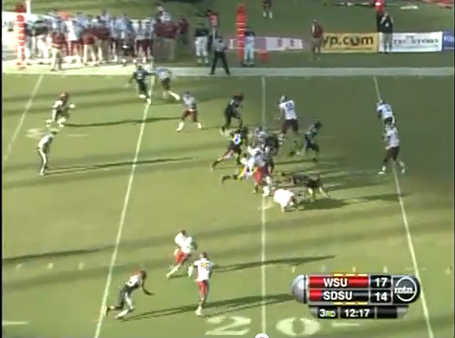 As Wilson catches the pass, you can see why this play works. San Diego State's aggressiveness is used against it as the lineman get out in front to block. The spot the players rushed from is wide open, giving Wilson a huge running lane and a ton of help. Also notice Carl Winston holding the other linebacker at the top of the screen with a simple swing route. 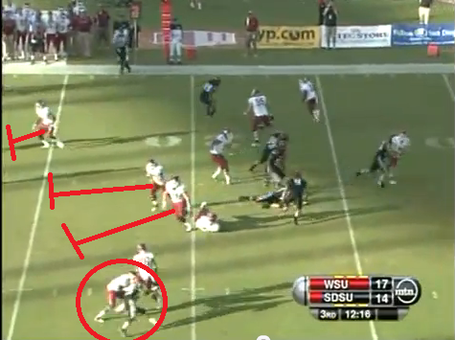 Wilson has a gigantic halo as he turns and heads upfield. With two blockers in front and only four men to beat -- one at the top of the screen, one at the bottom, the player next to the referee and one outside of the frame -- he's in good shape. 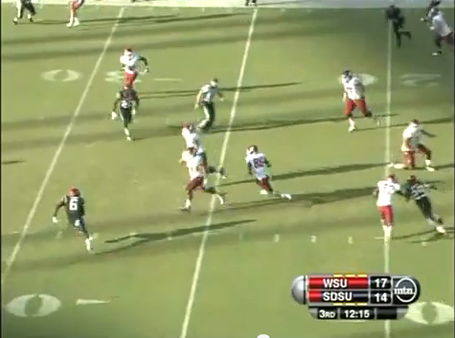 Notice the blocking of the wide receivers here. Isiah Barton peels off to clean up a defensive back, springing Wilson free. At the top of the screen, Jared Karstetter occupies his man just long enough to give Wilson another lane on the outside. 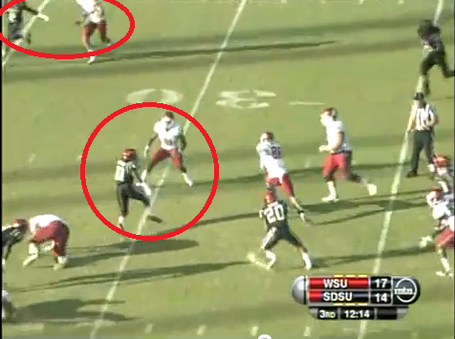 This is what happens when everything goes right in the outside screen game. The wide receiver screens are clearly a huge part of the Cougars' offensive gameplan and you can see why. With so many playmakers, including Wilson, on the outside, finding ways to get the ball into their hands in space is certainly a priority.

As we saw on Saturday, this simple screen can pay huge dividends against a defense that gets too aggressive. Wilson had just five players to beat on the play, and friends ushering him along. His individual effort was outstanding, but he was also the main beneficiary of the perfect playcall and the perfect situation.