Share All sharing options for: WSU Vs. SDSU: Grading The Defensive Tackles

Before each game, I list five things I want to see from the Cougars that weekend, then hand out some grades on each. WSU fared so well in the first two contests, that I found it difficult to be very critical. That obviously won't be a problem this time.

Normally, I give out the grades on Monday or Tuesday following the game, but San Diego State was the first opportunity I had to actually re-watch a game. So, like a coach who says he has to "watch the tape" before he'll comment definitively on the major questions of the game, I attempted to reserve judgment until after I had completed my second viewing, during which I charted personnel and took notes on a number of different things.

Because of that, I have an insane amount of material -- more than enough to break each of the "five things" into separate posts this week. So that's what I'm going to do, starting with the defensive linemen.

Blocker-absorbing play from the defensive tackles. It appears WSU may finally have found its space-eating, wrecking ball of a nose tackle in Toni Pole. He commanded double teams against UNLV, and I'm being honest when I say I'm not really sure I remember who the last guy was who fit that bill. That kind of a guy makes a huge difference, allowing the guys next to him to only have to win one-on-one battles and letting linebackers roam free. Against Ronnie Hillman, that's going to be paramount. We don't yet know how much Pole's knee injury will slow him; if the answer is "not much," then WSU has a chance to contain Hillman. Anthony Laurenzi will need to do that when he rotates in for Pole as well.

After giving up 227 yards rushing on 44 carries, I'm sure many of you would have gone lower. But here's what I saw.

First off, I don't think "227 yards on 44 carries" tells the whole story. It's not like Ronnie Hillman made tire tracks over the WSU defense all day -- in the first half, he gained just 53 yards on 14 carries for a 3.8 average. Yes, he had two touchdowns on runs of double-digit yards, but he was more or less held in check, and the defensive line had a lot to do with that, particularly the defensive tackles. So I took that into consideration when giving the grade. I also took into consideration that Toni Pole was pretty much awesome, as expected. He regularly got a push and was often in the Aztecs' backfield.

Still, there are obviously two halves to a football game, and the adjustments the Aztecs made as the game went on exploited the Cougars' weaknesses -- one of which, right now, is whoever happens to be playing next to Pole. Consider the following play, which came in the first half, but was emblematic of things to come.

Pole and Travis Long are lined up on the right side of the defensive line (top of the picture). Next to Pole is Justin Clayton and defensive end Adam Coerper. The Aztecs come out in 11 personnel -- one running back, one tight end. The Cougars are in their base 4-3 defense: 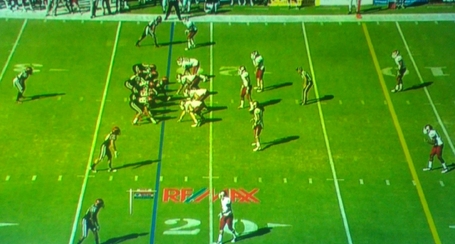 Pole and Long generate tremendous push up front - as the handoff is taking place, they're already one yard in the backfield. You can even see the center has just given up on his double team on Pole and is heading for a linebacker. Unfortunately, the other half of the line is already one yard the other direction: 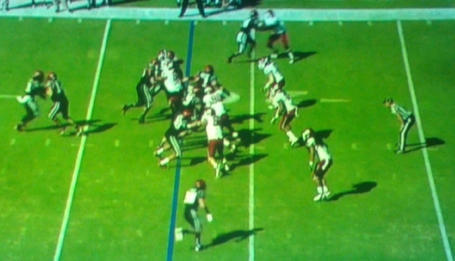 The play is actually designed to go at Pole and Long. But Clayton and Coerper get dominated to such a degree -- Clayton is cleared out by a double team, Coerper pancaked by the tight end -- that Hillman has a wide open cutback lane. Pole is left grasping at air: 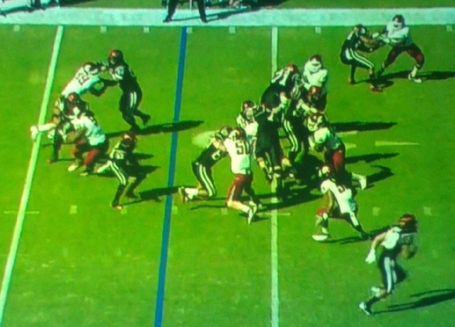 Suddenly, the center's decision to head to the second level is looking like a pretty good one. After dancing around Pole and Long -- and with the left side of WSU's line absolutely obliterated -- Hillman is free to head back where the play was designed to go in the first place.

By the way, this isn't a piece about the linebackers, but notice how C.J. Mizell and Sekope Kaufusi have to shadow Hillman as he cuts to his right? They don't know it, but they're now out of position and Hillman's got a wall in front of him -- all because Clayton and Coerper couldn't at least hold their ground. The play ended up as a nine-yard gain.

As the game wore on, SDSU increasingly ran the ball away from Pole. They'd go so far as to show one look, wait for the Cougs to get set, then motion a tight end to the side away from Pole -- then run it to that side. It happened over and over again in the second half, and there wasn't much WSU could do about it.

So, while the overall picture looked bleak at the end, I think the tackles -- particularly Pole -- did some good things. Going forward? I don't know what to think. Future opponents will obviously see this, although I'm not sure how much they'll be able to replicate it. For one thing, nobody else is going to have Hillman. Like Kendall Hunter last season, there's a better than even chance that Hillman is the best back the Cougars see this year.

Additionally, SDSU had either two or more tight ends or one tight end and one fullback on 76% of their plays. Rare was the play like the one above in 11 personnel. How many teams will the Cougars face like that going forward? Probably not a ton, but there's actually a decent chance that both Colorado and especially UCLA -- which has talented tight ends -- try to do some of this. It will bear watching.