Yesterday, I wrote about adjustments when looking back at the Washington Huskies win over the Cal Bears. In the fourth quarter, Washington head coach Steve Sarkisian made an excellent adjustment to force the defense into a favorable matchup for his team by running Chris Polk down the seam while holding the safeties with slot corner routes.

Football is a game of action and reaction, and amounts to a 60-minute long game of cat-and-mouse. Offensive and defensive coordinators get into a chess match, adjusting, countering and repeating the process throughout the game. And if an offensive coordinator goes to the well too many times, they're liable to get burned.

The Washington State Cougars were burned because of a love affair with Marquess Wilson and the outside screen game against San Diego State. Throughout the game, Wilson was, more often than not, used as the target of a middle screen, and it worked to perfection early in the second half. But as early as the second quarter, I kept wondering when the Cougars would fake the screen and run something off of it while feeling as though San Diego State would adjust and take it away.

As expected, the Aztecs adjusted and blew up the play in the fourth quarter. That, coupled with a massive mistake by Marshall Lobbestael, led to a crippling turnover on a promising drive. So let's examine what happened and why the Aztecs were able to kill the play in an effort to learn from it.

The look on the play should be familiar: it's the exact same look San Diego State showed on Wilson's touchdown catch earlier. The stand-up rush end is to Wilson's side, the corners are in press and the extra defensive backs are playing off the slot receivers. In this case, though, all 11 defenders are within 10 yards of the line of scrimmage. It's a subtle difference, but San Diego State is stacking the box. 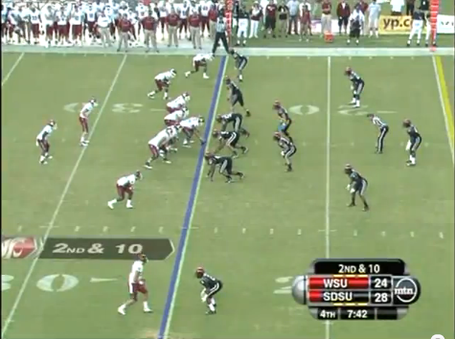 Just like the first time, San Diego State is sending both linebackers on the play. This time, though, they twist. The blitz package was a bit different. The defensive end, shown in yellow, also takes on the running back, taking away the outlet on the play. This will come into play shortly. 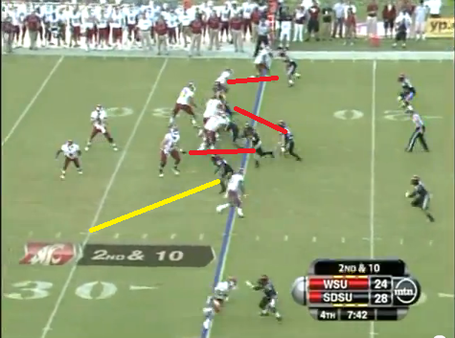 As Lobbestael prepares to throw, the problem is evident. Wilson is unable to shake his man, the run doesn't work and the outlet is dead in the water. There is nothing that can be done to salvage this play now, and this is only a split-second after the snap. 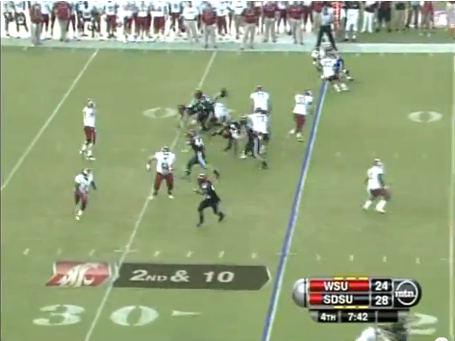 The player circled in yellow realizes what's going on and quickly retreats, spinning around to cut-off Wilson's path. Meanwhile, the corner who began the play in press on Wilson is still on his hip, playing a key role in preventing Lobbestael from throwing the pass. Even the rub doesn't work this time. 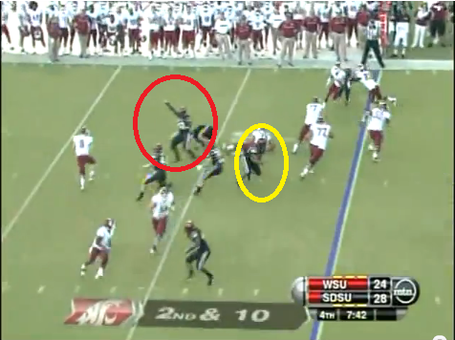 And here's where it all goes to hell. Lobbestael pumps the throw while realizing it's not there. As he tries to tuck the ball, he drops it. This was a mistake he simply could not make, and it proved incredibly costly. Also notice two players still chasing Lobbestael while the other three turn to cut-off Wilson and the corner still on his hip. This play was dead from the start. 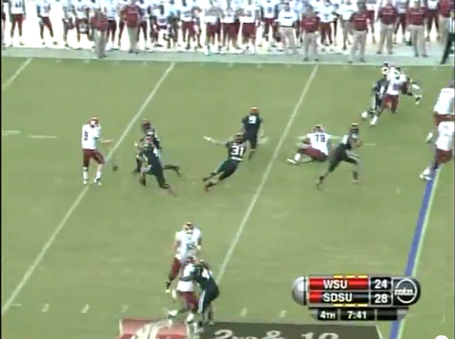 So what went wrong here? Running a middle screen to the short side of the field was far from wise, and it didn't fool anyone. By running the play to the short side, the Cougars made it easier for the Aztecs to cut the passing lane off with the rush while giving Wilson little space to work with.

The problem with the screen is the small margin for error. Notice the offensive lineman pulling, leaving defenders unblocked. Lobbestael gets one shot, and only a few seconds, to make the throw. If it's not there, he has to throw the ball into the seats or eat it. There's no middle ground or way to save it.

More importantly, this play was simply run too many times. San Diego State pressed to take it away -- something UNLV and Idaho State couldn't do -- and had the talent on the outside to blow the play up. Run it enough times and the defense will inevitably adjust, resulting in what we saw here.

San Diego State's aggressiveness in defending the outside screen could've been exploited simply by faking the screen and running a wheel off it. Leave the blockers in so there's protection, pump the screen and have both Wilson and the slot receiver whose job is to run the corner break deep. Or pump to Wilson's side and throw to the other side of the field, where two receivers are in the route already.

Instead, the Cougars went to the well one too many times, and were burned in spectacular fashion. Lobbestael deserves some of the blame for dropping the ball, but the playcall put him in a no-win position.