WSU Vs. Idaho State: Unbalanced Lines And Holes The Size Of Texas

Share All sharing options for: WSU Vs. Idaho State: Unbalanced Lines And Holes The Size Of Texas

Something subtle happened as the Washington State Cougars took on Idaho State on Saturday. Earlier, we wrote about the different personnel groupings and formations used by offensive coordinator Todd Sturdy, and some of the creativity he employed. The play that stood out was an out-and-up by Isiah Barton, with the WSU wide receiver motioning into the backfield pre-snap, then running his route from a wing position. But there was another, perhaps more interesting, play in the first half.

There's something odd about the following picture. See if you can find what stands out. 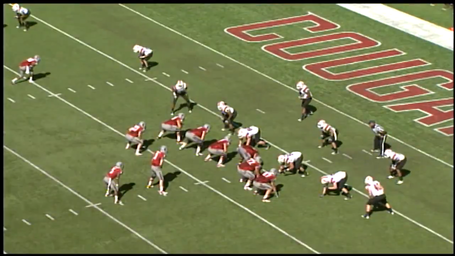 Rickey Galvin is lined up at pistol depth, behind Marshall Lobbestael in the gun. That's pretty normal. To the left are two receivers, with Jared Karstetter just out of frame at the top of the screen. Also normal. Even the wing -- Jared Byers -- is normal.

But look closer. From left to right on the offensive line, we have: LT, LT, LG, C, RG, TE. Hello, unbalanced line.

The ball is snapped, Lobbestael turns and hands to Galvin. By the time Galvin receives the ball, this is what the field looks like. 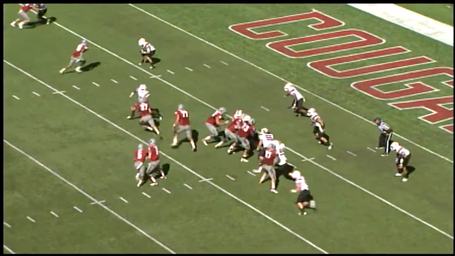 It's all over at this point, but the blocking here is interesting. Both David Gonzales and Dan Spitz block down from the unbalanced side. John Fullington, seen guarding the hole to make sure it doesn't go anywhere, pulls, quickly getting into position to clean up. Byers seals the hole on the left-hand side of the line.

By the time Rickey Galvin gets to the hole, Byers has taken his man out of the play. Karstetter has his man sealed at the top of the screen just out of the picture, and the hole is big enough for me to run through. Gonzales and Spitz -- we'll just call them the Bash Brothers -- have driven their men inside and out of the play. What you have is a mess of bodies and a massive hole. 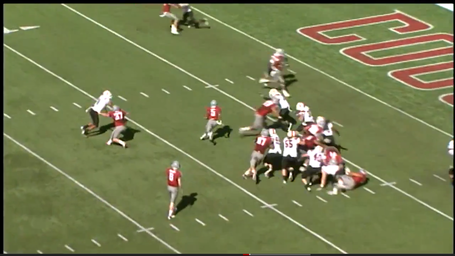 Additionally, that's Fullington to Galvin's right, cleaning out two Idaho State players. Now we see why he was moved inside. His ability to pull and quickly get to the hole on this play is exactly what a coach wants to see from a guard. He did everything right, then finished the play by throwing the final block to spring Galvin.

Galvin walks into the end zone and the play is a complete success.

This was an incredibly basic play out of the unbalanced formation, which is one of the reasons I don't think we saw even a fraction of the playbook on Saturday. Almost everything WSU ran was a complete success, but it was also very simple at its core. This was a beginning, a foundation to build off of for the rest of the year. And the unbalanced line has me excited to see what else is run out of the formation.

This was a subtle play, but it was effective and creative. I'll just guess we'll see more of this, especially in short-yardage. And this is why the tight ends and wings are an integral part of the offense, even if they're not huge receiving weapons at the moment.

*Corrected to reflect who the other tackle on the left side was. It was Dan Spitz, the backup left tackle, who was lined up inside of David Gonzales.