WSU Vs. Idaho State: A Look At Marshall Lobbestael And A Glimmer Of Hope

Share All sharing options for: WSU Vs. Idaho State: A Look At Marshall Lobbestael And A Glimmer Of Hope

Earlier this morning, Jeff wrote about Marshall Lobbestael and his new role as a starter. As I was looking back through a few of the highlights, I found something interesting that seems to confirm Jeff's suspicion about a different Lobbestael. He seems to have grown, evolved and learned as a backup, and it was evident on the final play of the first half -- a 61-yard touchdown to Marquess Wilson.

After Carl Winston rattles off a 12-yard run, WSU hustles to the line of scrimmage with time winding down in the half. At this point, there's under 20 seconds to go, and many of us expected WSU to head into the locker room up 33.

Offensive coordinator Todd Sturdy had other ideas. Below is the formation, run out of 10 personnel. Three receivers are spread out to the right and Marquess Wilson is on the short side of the field on the numbers. 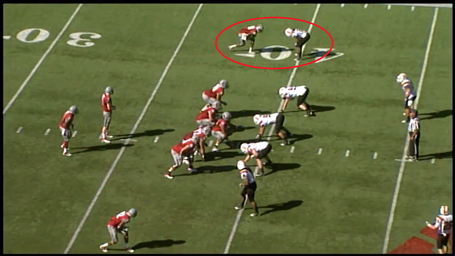 The cornerback is giving away press coverage. He's going to try and jam Wilson off the line, and Lobbestael knows it.

The ball is snapped and Lobbestael begins his drop. He hitches, and begins a three-step drop, all while looking to his right, to the wide side of the field. This freezes the safety, who is just out of frame. Wilson also easily beats the jam as Idaho State cornerback Donovan Henley whiffs. 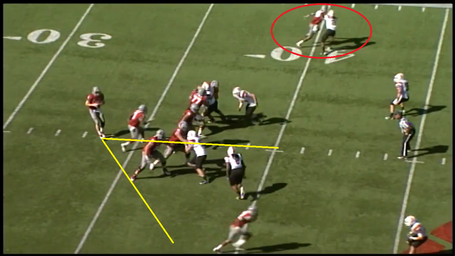 Lobbestael hits his drop below. Now, he begins to work right to left. The head-turn in his drop was for show; now he's actually scanning the field. He's to his back foot and has yet to look at Wilson. Note the protection, as well. Nice, clean pocket. 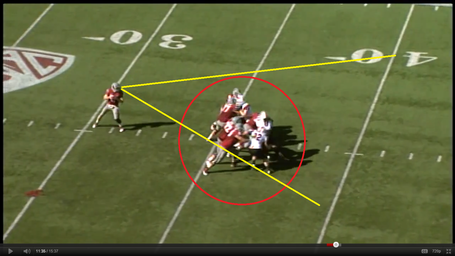 From another angle, Lobbestael begins his drop while looking right, to the wide side of the field. Because the ball is on the left hash, and because Lobbestael immediately looked to the wide side, the defensive backs and linebackers open their backpedals to the offense's right. 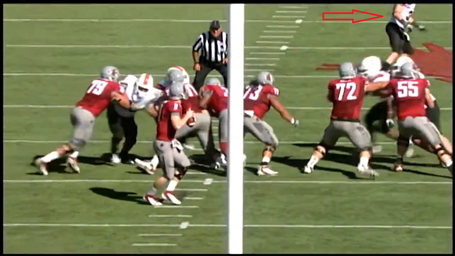 By the time the ball comes out, the problem, for Idaho State, is evident. Below, the issue in coverage is clear as day. This is what I like to call the moment a safety realizes, "woops." 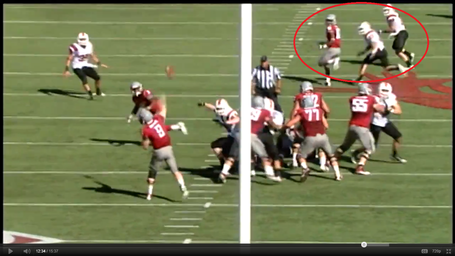 Bobby Ratliff has dragged two defenders with him on a post route, the weakside backer is hanging out, waiting for Winston to leak into the flat and nobody is over the top on Wilson, who is out of the frame. 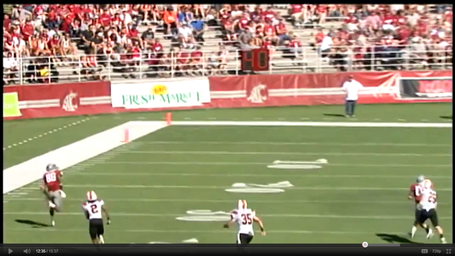 At the bottom of the screen, Idaho State cornerback Donovan Henley is out of the play, along with WILL JT Albers. Wilson is wide-open, with a solid 15-yard halo around him and nothing but daylight in front of him. The play is over.

It's tough to pinpoint what, exactly, happened here from a coverage standpoint. Idaho State was in press, and it seems as though Henley was expecting help over the top. Lobbestael helped the situation by looking off the safety and making good use of the wide side of the field. With the ball on the left hash, there's only so many useful routes Wilson could've ran, and the defense almost expects the action to happen to the wide-side. Thus, the decoy routes.

This play was encouraging, no matter the opponent. Lobbestael's footwork was clean, and he spent his drop looking off the defense while freezing the safety. The only two routes that matter here are Wilson's go and Ratliff's post. The latter helped freeze the defense and hold a safety, opening the former.

And Lobbestael whipped his head around to the left at the last moment, hitting his back foot and throwing a dart that hit Wilson in the numbers.

This isn't the maligned Marshall Lobbestael we've seen before. He had every opportunity to lock onto Wilson on this play. Instead, he noted the coverage pre-snap, did his part during his drop, then fired a strike to a man he knew would be wide-open to cap the play.

He's not Jeff Tuel and there's still a drop-off. But watching Lobbestael work, I saw a different player. Sure, he was given easy, efficient throws due to the playcalling, but when Lobbestael was called on to throw deep or make reads, he did so in clinical fashion.

And this was all after finding out he'd be starting an hour before the game. Give Lobbestael a chance; he might just surprise you.

*Photos via the WSUCougarAthletics highlight video.