We've talked about the positive changes Marshall Lobbestael has made since he last started for the Washington State Cougars, but there continue to be a few, uncorrectable deficiencies that may make the next four to eight weeks difficult. Lobbestael is far from a pure passing quarterback. His arm strength is a significant drop-off from Jeff Tuel's, and it may cause problems going forward. Lobbestael is still the experienced man on the totem pole, and knows how to prepare for games, but there's simply no fixing the arm strength issue.

Fine, here's the out route everyone's talking about. Lobbestael does a few things right, beginning with the following screen capture. 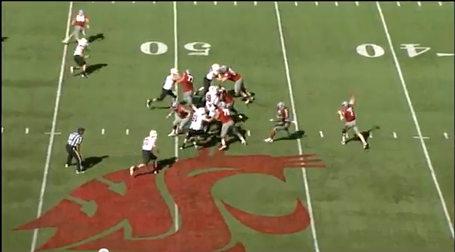 The ball is out before Jared Karstetter comes out of his break and gets his head around. This is a must on an out route. If the quarterback fails to quickly make a decision and get the ball out, the interception will almost always go the other way for six. So far, so good.

Now for the end of the play. This is where I admit many of you were right. After watching the play again -- and again, and again -- it became clear. 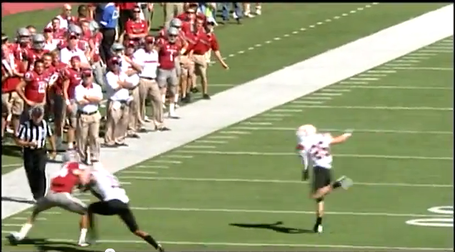 While Lobbestael had the right timing, it took for ... ev ... er to get there. And this comes on a quick out to the short side of the field -- he's almost standing on the right hash as he throws. It's one of the shortest, and theoretically should be the fastest, throws a quarterback makes.

Lobbestael's deficiencies can be worked around, though. In a perfect world, where one could create a robo-quarterback to fill-in for Tuel, Lobbestael's head and Connor Halliday's arm would suffice quite well. But this isn't a perfect world and we still haven't figured out how to mix-and-match body parts.

There is a way to play to Lobbestael's strengths, and it comes in the form of the script and the play-calling of offensive coordinator Todd Sturdy. The outside screen game is a must and the running game has to be more than a show-me element of the offense. Both of these things are realistic, at least against UNLV.

There will come a point in the next few weeks where opposing defensive coordinators "figure it out." When it comes, we'll truly see where Lobbestael's limitations lie. I do not, however, believe it will come against UNLV.

In all likelihood, defensive coordinators will begin to press in an attempt to take the outside screen game away. By doing so, they'll be daring Lobbestael to beat them by throwing over the top and fitting balls into small windows. While he's shown the ability to place a deep ball with a relative amount of precision, fitting a throw into a small window between closing defenders is not his strength; it never has been and probably never will be.

This is where WSU misses Jeff Tuel. Both he and Lobbestael are heady players, with the ability to make the right reads while knowing which throw to make. The execution, however, is the biggest difference -- casting aside Tuel's ability to make plays with his feet. Where Tuel can whip a ball into space faster than anyone on the team, Lobbestael struggles.

It doesn't mean the Cougars are dead in the water with Lobbestael. He's a smart player who knows his limitations. Unfortunately, every opposing coach knows Lobbestael's limitations, too.

Lobbestael's success during his time at the helm -- be it four games or eight -- will likely be defined by the plan put in place by Sturdy. If the Cougars' offensive coordinator can make adjustments and win the chess game, Lobbestael will survive. In that regard, we'll learn more about Sturdy in the next month or so than we will about the fifth-year senior at the helm.