It feels like Cougar head coach Mike Leach is stockpiling WRs just in case the world really is ending in 2012. In reality, Lewis is only the fourth receiver in this class. With all of the previous WRs de-committing, and the total amount of Paul Wulff players no longer expected to sign with the Cougs up to 10, spots have opened up. As Mark mentioned before, Leach + WRs = <3.

Also, with his verbal commitment, Lewis becomes the fourth former SMU commit in this class. June Jones tried to call up Leach to talk to him about it, but all he got was this message: 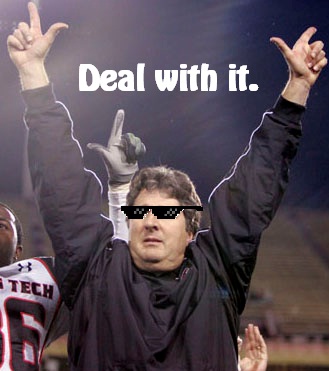 Now, you'll notice he played RB in high school. Despite that, he's coming to WSU as a slot WR. At 5'10, 160 lbs, he pretty much fits exactly the Leach mold for wideout. Small, shifty, quick, yards after the catch, and a great return man to boot. I think he'll battle it out with Rahmel Dockery for playing time in the return game, but when was the last time we had too many good punt returners?

Usually, I talk to Mark about recruits once they commit. It's always good to hear what someone else sees, as I miss things sometimes, or just evaluate differently. With Lewis, this is the first time where we've pretty much been in total agreement. Well, save one thing:

"Man, Lewis is ridiculous. I really want him." - Kyle

"I think Marks plays right away, and both Jackson and Lewis have at least 20 catches each." - Kyle

"I honestly think Lewis starts from day one." - Mark

If the guy who studies our receivers more than anyone on the planet thinks he has the ability to start right away, then that is some pretty high praise.

If Alex Jackson committed while Wulff was still head coach, he would have been the best player in the class, regardless of position. With Lewis and Marks on board, and Kenny Lawler a possibility, Jackson could wind up as the fourth best WR in this class. Think about that for a second. And then think about how it happened.

I know I said I was going to post an LOL U MAD? picture, but I'll let twitter do the talking for me:

Washington State coaches are treating the #SMU recruiting class like a buffet. "We'll take some of that, one of those...." #GoCougs #WSU