A Word About Jake Eldrenkamp And The Events Of Tuesday

Share All sharing options for: A Word About Jake Eldrenkamp And The Events Of Tuesday

I was really trying to stay away from a computer, and away from writing, for two days in what is my weekend, but this bothered me. I watched as plans came together to have Jake Eldrenkamp announce where he'll be playing his college ball come together, then almost immediately fall apart. And it's a damn shame.

Eldrenkamp planned to announce his decision on Dave "Softy" Mahler's show on Wednesday, but due to the backlash and whirlwind of speculation, he called everything off. Washington fans thought he was coming to Montlake, due to the venue, and Washington State fans thought the same. Yet I'd be willing to bet it didn't enter Eldrenkamp's mind when he made the decision to announce his choice on Softy's show.

Want to know how it all went down? It's pretty simple, and innocent, you see. 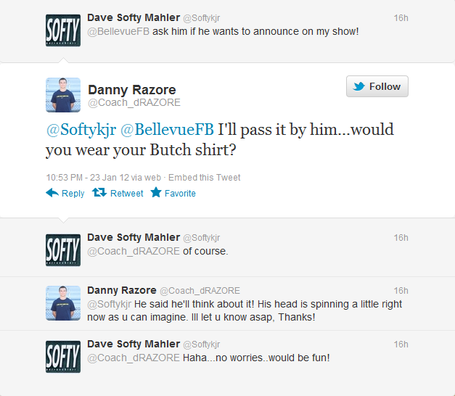 @Softykjr Jake is in for announcing at ur place! How does tomorrow sound? #UWvWSU

Razore is an assistant at Bellevue. Mahler is a Bellevue alum, as well, making his show a pretty logical place for Eldrenkamp to announce his college choice. As an aside, Mahler also maintains Bellevue reached out to him, as an alum, before the exchange took place. It really doesn't matter how the whole deal came about, anyway.

Consider that Eldrenkamp, who saw his recruiting interest pickup late and was overshadowed by other highly-touted in-state prospects throughout the process, wanted his moment. Remember this is a lineman, a guy you probably won't hear from, and who won't have the spotlight, for the next four or five years -- unless he screws up. Wherever he goes, he'll toil in relative anonymity, appearing every once in a while in a feel-good feature about the hometown kid.

So he wanted to hop on the radio and have the spotlight for a moment. It doesn't matter if he announces on Softy's show, Ian Furness' or some public access channel in the middle of nowhere. Let the kid do what he wants and don't ruin this for him.

I get it: Everyone wants information now, and speculation runs rampant this time of year. But this next week is the absolute worst for an outside observer -- I'm fairly sure Ryan Divish, whom I'm using as an example because his recruiting tweets entertain me, would like to go hide until signing day, and I'm right there with him. The constant speculation, prodding of 18-year-old kids preparing to make the biggest decision of their lives, and fans trying to pull recruits one way or another is tough to watch.

Eldrenkamp is the latest example, but isn't the first and won't be the last. If he wants to announce on Softy's show, who cares? If he wants to scream his choice from the Bellevue rooftop, that's cool too. Let the kid have his one moment of glory on his terms, and don't spoil his fun. By all indications he's a good kid and he deserves this.

And while we're at it, stop messaging recruits using social media platforms. Be better than that. The last thing any of these kids need as they mull a huge life decision is even more hands in the kitchen, trying to push and pull them in different directions.