Mike Leach Thinks A Bear Fighting A Shark Would Be Awesome

Share All sharing options for: Mike Leach Thinks A Bear Fighting A Shark Would Be Awesome

Usually, coach appearances on web chats are little more than a series of cliched answers to lame questions.

Mike Leach's appearance today in a live chat at The Seattle Times website certainly had plenty of that -- "I've always felt like that football's a partnership between the coaches, players and crowd," and "Well, I think you gauge everything by whether you're improving and doing the best you can. Then you have to win one game a week," for example.

But then again, it also had this: 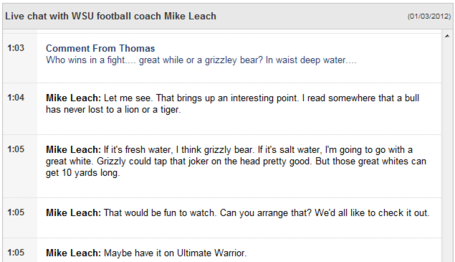 Yep. Our new football coach did, in fact, offer up an opinion on who might win a fight between a grizzly bear and a great white shark -- in four consecutive, stream-of-consciousness posts that took the potential venue into account.

I tried to think of something funny to add to this, but I'm just going to go ahead and yield the floor, because I can't.

In actual football news (of which there was not surprisingly very little), Leach did say that he hopes to announce a defensive coordinator after the American Football Coaches Association convention, which runs from Sunday to Wednesday, Jan. 11. Anyone Leach would want to meet with or interview will be there.

Leach also talked about the talent on the roster ("there are some holes"), his philosophy on quarterbacks (no two-QB systems, "it limits your quarterback reps") and how Marquess Wilson compared to Michael Crabtree (Wilson's "faster," Crabtree's "thicker," both are special with the ball in their hands).

It's really worth your time to go over there and read the whole thing. His rambling response to a question about the uniforms is simply classic.