Share All sharing options for: EXCLUSIVE: The Secret Behind Faisal Aden's Playing Time

It is no secret that a large portion of the Cougar fanbase has been frustrated all season by Ken Bone's insistence to play Faisal Aden a high number of minutes, even as he was coming off the bench and being ineffective.

It seemed that Bone was finally getting tired of his shoot first, turnover second, and pass third mentality. Aden played just 26 combined minutes against Oregon State and Utah. After the Utah game, Bone was asked to comment on Aden's dwindling minutes. This is what he said (via Christian Caple):

One thing is puzzling about that quote. There is the simple fact that Aden hasn't really made baskets at a good rate in a basketball sense for quite some time. One would probably have to go back to the non-conference schedule of last season to find Aden making baskets with efficiency. Last season he finished with a 95.1 offensive rating (100 being average) and a 49 eFG%. This season he has become more turnover-prone, dropping his ORtg to 89.1. Aden hasn't made baskets at even an average rate in a long time, so that can't possibly be why Bone had left him in the lineup for so long.

More research had to be done. Interviews needed to be made. Pictures needed to be analyzed. One of the first people we spoke to about this matter, Washington State point guard Reggie Moore, had this to say:

"I'm generally not one to care about hand-made crafts or anything like that, but Faisal's work has been special and provides the team with something that no other Pac-12, or possibly any college, team has." 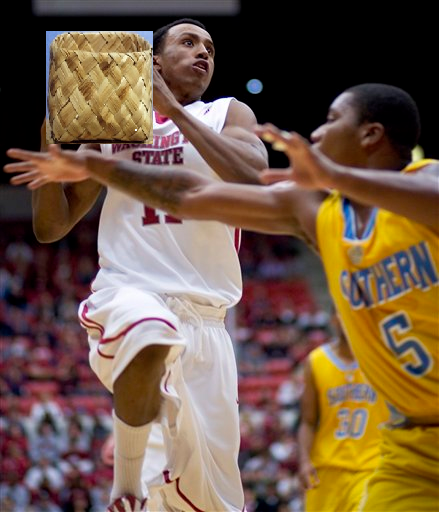 Aden With One Of His Baskets Early In His Junior Season

It turns out when Bone was talking about Faisal Aden's ability to make baskets, he wasn't talking about basketball at all. Aden is an accomplished basket weaver and apparently this provides great value to the rest of the team.

"I can't tell you how big of a recruiting tool that is," Bone said in a phone interview Friday, "To show that kind of high-level craftsmanship can be attained at Washington State, it just appeals to the parents and athletes alike. When I walk into a living room with some finely woven wicker, I immediately command attention."

So how big a role did Aden's baskets play in Bone's most recent recruiting class?

"I've always loved working with baskets," said highly regarded Cougar recruit Demarquise "Que" Johnson, "and there is an obvious connection to the game of basketball and baskets. I mean, it is right there in the name. When Naismith invented the game, they were played with handmade baskets just like the ones they are producing at WSU. I want to be a part of that."

It's also more than just a recruiting tool. Aden's baskets have become useful in all sorts of situations for his teammates and coaches. From collecting practice jerseys for the laundry to storing office supplies in a fashionable manner, there seems to be no limit to how Faisal's baskets have impacted the team. 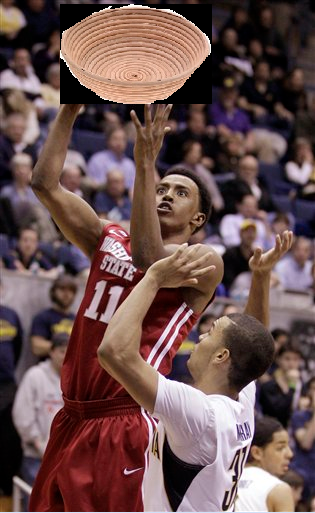 "I still have some of them," said former WSU standout and current Golden State Warrior Klay Thompson, "and he sent me an instructional video to pass the time for the lockout. They are just so useful, especially for carrying delicious baked goods like brownies. My new teammates love that!"

Bone described the story of when he first received recruiting tape of Aden. "It was presented in this beautiful reed basket. My wife loved it and I was instantly sold. I offered him a scholarship soon after."

So what does Aden's crafty off-court ability have to do with the playing time he was receiving on the court? Bone wanted to reward Aden in some way, and since monetary compensation is against NCAA rules, he helped Aden the best way he knew how. This arrangement was working out well for Aden until very recently. As mentioned before, Aden played well below his usual minutes against Oregon State and Utah. 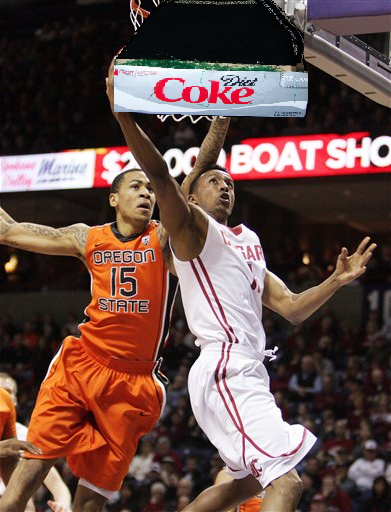 Aden's basket-making ability seem to hit rock bottom just before the Oregon State game and his minutes showed it. The game was being played in Spokane and his teammates were relying on him to provide baskets to carry some of their toiletries and other small items. As clearly pictured above, Faisal's work fell short of expectations.

"It was a Diet Coke box with what appeared to be a strap from his bag glued on," observed freshman guard DaVonte Lacy, "I'm not even sure where he got the fake plastic Easter grass this time of year."

Most of the team complained of the "baskets" ripping and tearing. One teammate reported that he watched as a $50 bottle of cologne fell through a hole in the soda box and shattered on the pavement outside Spokane Arena.

"On New Year's Eve!" said Brock Motum, visibly holding back tears,"Needless to say, I didn't have anyone to kiss at midnight."

When confronted with this, Aden said he felt bad about the situation but added, "Let's be honest, he wasn't getting a kiss anyway. Have you seen that dude's shot face?"

Bone was not pleased with Aden's effort, leading to the "making baskets" quote from above. Aden played more minutes against Utah, but still was far below his season average. It appeared that all hope was lost for the Cougs to have their basket-making specialist back in peak form.

However, in looking at the boxscore for Saturday's game against Colorado, one will notice Aden was back to playing his early-season minutes. He played 28 minutes in that game, more than in the previous two combined. Hope may be on the horizon, and WSU's players, coaches, and recruits might get to enjoy finely-made baskets for at least a couple more months.

Charlie Enquist probably spoke for everyone when he said, "I hope he fixes whatever is wrong, because I have a lot of crap to move out at the end of the semester."