Why was Connor Halliday benched on Saturday and, likely, for the foreseeable future? It's simple, really.

Mike Leach never wanted to play this yo-yo game. I don't think any coach wants to, really. Ideally, Connor Halliday and Jeff Tuel would've been completely healthy as spring practice began, giving Leach a chance to fully evaluate each. Instead, there's been a domino effect, and an attempt to find the right quarterback while playing the hot hand -- learning on the fly as the season progresses.

Tuel earned the job in large part because he knew the system and had taken the most reps. He looked fine on the practice field coming into the season, then seemed to freeze up in games. Not in the sense of making crippling mistakes, but he was just tentative. The ball wasn't coming out as quickly as it should have.

When Tuel sprained his MCL it forced Leach's hand. A change was made, and Halliday started seeing more reps and more live game action. He had the same no fear mentality he's always had, which resulted in some big plays and spectacular mistakes. It was boom or bust -- and each were like those loud explosions that wake up the neighborhood.

The Oregon State game, however, was a meltdown that Halliday couldn't seem to stop -- a tailspin he never pulled out of. Tuel took over -- twice, in fact -- and handled himself quite well. Even still, Leach doubled down on Halliday, removing the "or" from the depth chart and expressing confidence in him as the next week began.

That is until Saturday. Two throws ended Halliday's time on the field, and it was easy to see why. Put aside just the results for a moment -- both were interceptions. How the interceptions happened -- and where they happened -- was worse.

The first came as Washington State drove into the red zone. This was a wonderful chance to open the game with a touchdown. Instead, the drive ended in an interception and a touchback.

Both of Cal's cornerbacks bailed out, and the deep safety slid over the top of the slot man. All three wide receivers got vertical, and Cal had three players in the deep zone. It was actually a very good defensive playcall.

But Halliday could've salvaged it in a few ways. Wait another second and one of the two releasing backs would've had space. Or throw the right ball to Marquess Wilson and it ends up a touchdown, in all likelihood. Instead of floating the ball towards the back of the end zone, Halliday could've drilled it at Wilson's ass -- a back-shoulder throw. Do that and you've probably got a 7-0 lead.

The first pick was bad -- more of a bad throw than a bad read. The second interception, however, was inexcusable and a pretty good summary of Halliday's flaws, as well as where he can improve.

The play was 6 -- Mike Leach's call for four verts. It was the absolute perfect playcall against the defense Cal called. There were so many options here, and all Halliday had to do was look off his first read. If he had, this play was a touchdown.

Now let's zoom out and see what really happened.

This was just a bad everything. It was a bad read, bad throw and bad result. Before the snap, the safety who ends up making the play is deep -- out of frame. But that's not really the player you should be focusing on. Instead, watch the GIF again and focus on the player highlighted below. 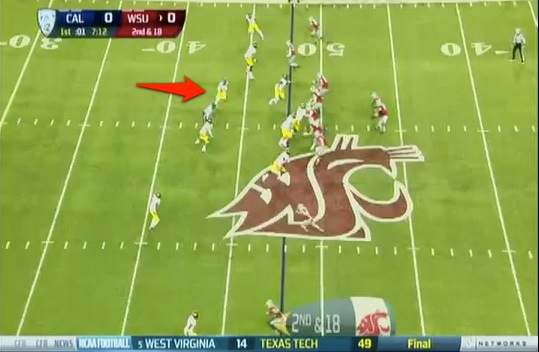 Edit: I meant to point this out, but forgot. Wilson hesitated after clearing the jam, like he saw the safety coming hard from the middle and was going to sit in the space between the corner and safety. You can see him stutter step in the first GIF. Had he not, he may have arrived at the spot where the ball was thrown at the same time as the defender... but the safety blitz in the middle is still something that has to be recognized, and the inside receiver on the right was still probably the correct throw as a result.

He comes on a blitz and vacates the middle of the field. So now you have the linebackers in a short zone, one very deep safety playing centerfield, and the rest manned up. There's one hell of a mismatch here.

Because Halliday never looks off his first read, he guides the deep safety right to the interception. There's no hesitation by the safety at all -- as soon as the ball is snapped, he breaks towards Wilson and doesn't slow up. Halliday was looking that way the entire time.

This would've been fine if Halliday was manipulating the safety with his eyes, as he should've been. Had Halliday pulled the safety towards Wilson and looked off, he would've seen the inside receiver to the boundary side had got his man to bit on the inside release. He had two steps with no help over the top. This was a touchdown.

Instead, Halliday stayed with Wilson and never looked off him. He didn't see the wide-open man streaking down the seam. Heck, any other throw -- to any of the three receivers or the running back -- would've resulted in a nice gain.

What you have is two quarterbacks on divergent paths. One would've expected each to move towards the middle -- Tuel from timid and Halliday from fearing nothing at all. Instead, only one has: Tuel is playing more confident while still making sound decisions, while Halliday has a tendency to get even more wild.

"Initially Jeff was real conscientious. Connor was wide-open, would pull the trigger," Leach said. "And then Jeff kind of loosened up. And Connor's gotten reckless at times. If you could clone half of each of them, you'd be in business."

We've seen this before. In the first half against Utah last year -- Halliday's second real game -- he imploded. He was able to pull out of the spin, and did so with a lacerated liver, but his first half was noteworthy. That's what can happen when he starts pressing, attempting to throw guys open against a Pac-12 defense.

So for now, the offense is back to Tuel. Halliday does have plenty of potential, but he still has to cleanup the mistakes. And mistakes like the ones above are simply crippling to a team that's still trying to click on offense.