For the second time this year, the Cougs travel to the Beehive State (no, seriously) to face the other half of the Holy War. They'll take on a Utah Utes squad struggling in their second full season in the Pac-12.

Share All sharing options for: Travelin' with the Cougs: Salt Lake City, Utah 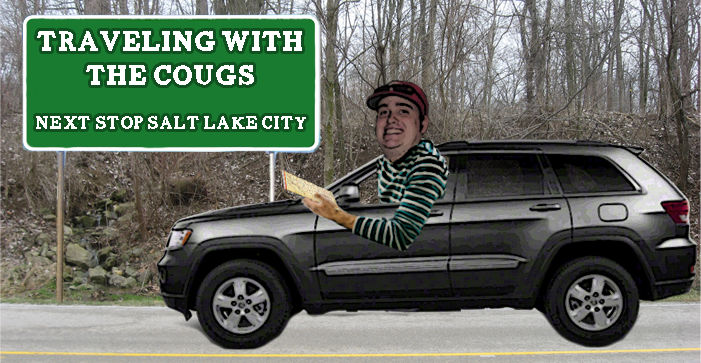 Traveling With The Cougs

This is part five of a six part series where we take a look at the cities you'll be traveling to as you follow the Cougs this season. Our next and final installment: Tempe, Arizona

For the second week in a row, the Cougars will travel to a big city. Alright, Salt Lake City isn't nearly as big as the San Francisco and it's a city that's not quite as worldly, but the Wasatch Valley is a beautiful place to put the capital of Utah. Utes fans haven't been too pleased with their team's performance this year. Although they tacked up a win against in-state rival Brigham Young, losses to Utah State and just one conference win have put the Utes and Cougars in a familiar spot: the basement of their respective Pac-12 division although the Utes are sharing a futon with Colorado. Even though these teams seem committed to breaking their fan base's hearts, some one will have to pick up the victory in SLC whether they like it or not.

One of the best things about Salt Lake City is how close the airport is to downtown. As we highlighted in our post on Provo, Utah, the airport is a good one. Access to baggage claim from the gate is easy and because the airport isn't too big, it should be simple to find your way around. The distance we noted on the airport is how far it is to Rice Eccles Stadium which is on the east end of downtown so the heart of Salt Lake City is even closer than that. SLC is a hub for Delta Airlines (or their partner SkyWest) so that's your best bet for flying from Seattle, Portland or Spokane.

If we were highlighting a basketball road trip, this post would ramble on as I highlight the best ski areas of which the Salt Lake City area has many. Lucky for you, I won't be rambling on about dry, fluffy Utah powder or fantastic 80 year old lodges. Count yourself as lucky.

Located in downtown Salt Lake City and built just before the 2002 Winter Olympics, this is probably the city's best hotel. The lobby is beautifully appointed and the rooms are gorgeous as well. Free high speed internet is available as is 24-hour room service from the hotel restaurant. The hotel's outdoor pool will be closed but luckily, their indoor pool is open year round. And yes, they do have afternoon tea with a harpist in the lobby. I know you were getting anxious wondering if they'd have it.

Ah, the Crystal Inn. This hotel is my dad and I's favorite for our ski trips to Salt Lake City. The rooms are large and decently appointed but what makes this a fantastic hotel is the complimentary breakfast. It's not just your standard muffins and other baked goods. Oh no my friends. It's waffles, bacon, sausage, breakfast cereal, scrambled eggs, yogurt. The best part is it's all complimentary. If it can sustain me through a morning of powder skiing it can give you all the strength you need for the game.

If you've got a rental car, make your way to Park City (about 20 minutes east) to sample some delicious beers in a beautiful setting. Wasatch makes some of the best beers around and some of the greatest T-shirts you'll ever by. I'm not going to tell you what they say because they legitimately offend some citizens of Utah so I'll let you take a peak at their online store. They also make a pretty good pizza and their nachos are hard to beat. Park City itself has a number of great shops to poke into before or after your meal.

Located just west of the University of Utah campus, this pizzeria features some of the more unique ingredients I've ever seen on a "make your own pizza" menu and they all sound delicious. Tabasco pepperoni, cajun link sausage, linguica sausage and gyro meat top the list. But the oddest and most intriguing one of all: smoked oysters. I'm not a big fan of seafood on my pizza but I'm just curious enough to try this.

I thought this was going to be Mexican food. Apparently, I was wrong. The restaurant describes it as "pre-Hispanic imperial Aztec cuisine" and although I can't tell the difference, I'm inclined to believe them. They do have your traditional Mexican fare but I suggest going with the Cochinita Pibil. It's pork loin rubbed with achiote (if you're curious about what that is, read here) vinegar, lime juice, orange juice, paprika and salt. Then it's slow roasted until it falls apart. I'm not sure if it could sound more delicious.

Right outside Rice Eccles Stadium, you've got no excuse to miss this great piece of Olympic history. Contained in the park is the cauldron used to hold the Olympic flame and the beautiful Hoberman Arch which was the back drop of the medal ceremonies during the Salt Lake Olympiad.

Started in 1930 as a research facility for the botany department at the University of Utah, it was designated a state arboretum in 1961. If you get the itch to get some exercise while you're in Utah, plenty of walking trails through native vegetation and gardens create a picturesque walk.

And that is Salt Lake City. I've been to SLC five times and although it isn't the well rounded, culturally diverse town that you may be used to, it's still a good place to catch a football game.