The BlogPoll ballot is here, as we ranks the Top 25 and the Pac-12. 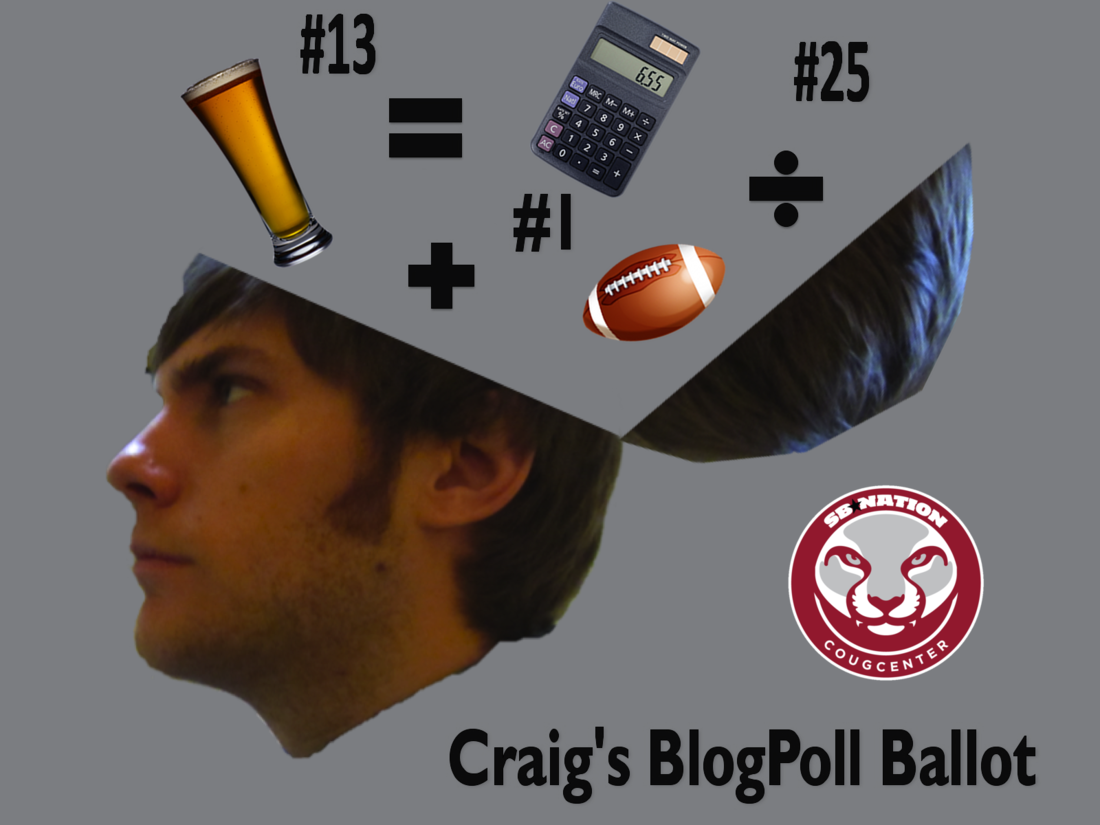 The Excel spreadsheet has made its choices for CougCenter's Week 10 BlogPoll ballot, and Notre Dame moved to the top spot, with Alabama at No. 2. Kansas State sits in third, and the Ducks are back in fourth.

The numbers really like Texas A&M this week, as the Aggies have shot up to No. 9 in my rankings, even ahead of some one-loss teams. A&M's losses have come to No. 5 Florida and No. 8 LSU, and they've blown the doors off of almost every other team they've played. Have to think the Aggies would be challenging K-State for the Big 12 title and have a shot at an undefeated record if they hadn't made that move to the SEC. But then we wouldn't get to see them hang 63 at Auburn, and life would be a little less fun.

Remember to go here for an explanation of the rankings. Enjoy the ballot's kind of creepy new logo, and keep reading for the Pac-12 rankings and the full top 25.

4. Oregon: The Ducks will finally get a boost to their strength of schedule this week, as they travel to USC. Will UO finally have to use their starters in the fourth quarter? They've been regularly rotating around 20 players on defense, which is probably the same amount of players USC has on defense total. The Trojans will be sucking wind.

21. USC: The Trojans got Kiffin'd in Tuscon.

23. Stanford: Their game with the Cougs came down to the final possession. I should put an auto-deduction in the formula for something like that.

30. Oregon State: The Beavs got Riley'd in Seattle.

34. UCLA: I think Bruins fans no longer know how to feel after that dramatic victory in Tempe. It's about time for UCLA to suffer an epic meltdown to bring things back to normal. Might I suggest Nov. 10 in Pullman?

37. Arizona State: The Sun Devils missed an opportunity to seize control of the South division. That's going to make it a little tougher for Todd Graham to upgrade his job next year.

40. Arizona: I TOLD YOU THEY WERE THE BEST 0-3 PAC-12 TEAM EVER. I TOLD YOU. Amazingly, the Wildcats could control their own destiny for the Rose Bowl with a win over UCLA and a USC loss.

67. Washington: The students rushing the field was unbefitting of a truly great program that has averaged nearly five wins over past eight seasons. Shame on you, young men and women, for bringing a stain upon this elite football school.

77. Utah: Are the Utes bad enough to lose to the Cougs this weekend? We hope so, but Cal doesn't think so.

90. Cal: I thought you were good, but just a little unlucky at one point, Cal. Doesn't seem to be the case.

102. WSU: Almost is nice and all, but the computer just sees another loss, more negative points on the margin, and a slight bump to strength of schedule.

114. Colorado: The Buffaloes move up thanks to playing Oregon. They couldn't get much worse in margin and record, so strength of schedule wins! It pays to have nowhere to go but up.

And finally, the ballot for this week: