Travelin' with the Cougs: Tempe, Arizona

Your guide to the desert as the Cougs take their final road trip of the season to Tempe.

Share All sharing options for: Travelin' with the Cougs: Tempe, Arizona 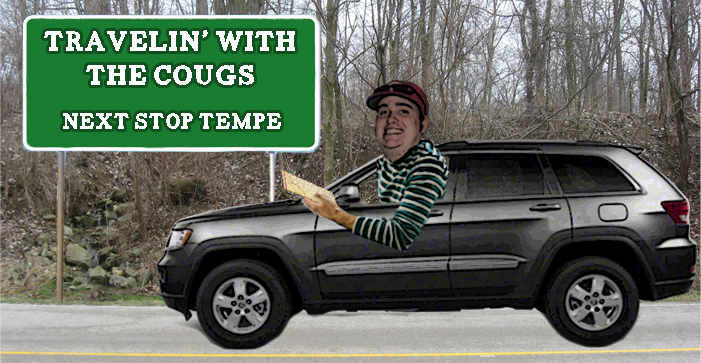 This is part six in a six part series where we follow the Cougs on the road. Next stop: none. Did you not read, I just said this was "part six of six" meaning this is it, DUH.

Welp, this is it for our Travelin' with the Cougs series. It's been an incredible journey. We started in Provo, Utah and went from there to a city that couldn't be more of a polar opposite in Las Vegas, Nevada. Then, the conference schedule started and we went from Corvallis, Oregon to Palo Alto, California and then, Utah came calling again with a trip to Salt Lake City. It's only fitting that we end in Tempe, Arizona. Why is it fitting you might ask? No idea but it sounded nice, didn't it?

The city of Tempe is a suburb of Phoenix, a place I'm sure many of you are familiar with given your baseball fandom or love for golf. I've never personally golfed there because the price actually goes up in the winter and it's about 11,000 degrees in the summer. November might be the perfect time to escape the cool down the Pacific Northwest is plunging into with a trip to the desert. Although the Cougs chances of leaving Tempe with a win are similar to some analogy about a snowball carving out an existence in the very same city, that doesn't mean you can't enjoy yourself.

The airport's location is about as convenient as it gets, right downtown and just minutes from the stadium. ASU is the largest employer in Tempe with just over 11,000 people working at the school. Sounds like a lot of employees doesn't it? Well, someone has to keep track of the 72,254 students at ASU. That's not a misprint. The students themselves could almost fill the stadium.

Every airline imaginable flies into Sky Harbor Airport so really, anything is a good option out of Seattle, Portland or Spokane but Alaska and Southwest probably have the most frequent schedule.

If it's got Fiesta in the name, it's gotta be fun right? Right? Whatever. Anyway, they've got a gorgeous outdoor pool to lounge around in along with a bar and restaurant on site. The rooms are well appointed and they come with the ever important free wireless internet. They'll get you to and from the airport with a free shuttle. They also brag about a fire place in the lobby which seems completely unneeded in the middle of the desert.

Phoenix Marriott Tempe at the Buttes (Distance to Stadium: 4.5 miles)

Holy crap this thing is built into the side of a hill. That's pretty awesome. Also, the pool looks really cool, flanked on one side by a rocky outcropping. The rooms are....wait, there's a water slide. YOU GUYS! THERE'S A FRIGGIN' WATER SLIDE! Sorry, got a little carried away. Anyway, the rooms are nice and there's also a nightclub on site for some reason. They charge for wireless internet but who cares? THERE'S A WATERSLIDE!

The only thing I know about La Quinta is they used to run those commercials where a person yelled "LA QUINTA" at me at the end. Scared the hell outta me. My easily frightened self aside, don't let the name of the place fool you as it's pretty darn close to the stadium. They offer a free shuttle to and from the airport and a continental breakfast every morning. The wireless internet is free as well.

Eight, count 'em, eight regular beers on tap that run the gamut from light to dark, plus rotators on tap as well. In terms of grub, I'd probably direct you towards the Carne Adovada. Cherry wood slow roasted pork simmered in a red chili sauce and topped with rice and beans in a flour tortilla. If that's not your cup of tea, the Tap Room Tenderloin sandwich with cooked to order filet mignon will certainly make your stomach very happy.

I'm biased here: it's Scandinavian food. Ordinarily, that should be enough to scare you away but Swedish meatballs are absolutely to die for. Then, Beaver Choice makes it even better by topping it with cream sauce and lingon berry preserve. Now, I'm a proud Swede. I love all things Swedish except for lutfisk and mercifully, Beaver Choice doesn't have it on the menu. If they did, I'd advise you to stay as far away as possible. How my people thought soaking cod in water for a week then putting it in water and lye for two days before putting it back in water for another week was a good idea I'll never know. By the way, when the fish comes out of the lye/water mixture, it's too poisonous to eat.

I love me some gyro plates and this is the best place in Tempe to get them. If you're still hungry or even if you're not but want some more good food, go with a shish kabob or the shawerma. While you're there, take a step outside your comfort zone and get the lamb's tongue. I have no idea how it tastes but if it's even remotely as good as beef tongue is in a burrito, you'll love it.

There are roughly 32 golf courses per person in the Phoenix metro area so bring your golf clubs for a morning on the links. If you've got the coin, head to TPC Scottsdale for a round on a PGA Tour quality course.

At just over 16,000 acres, it's the largest city park in the United States. Featuring over 58 miles of hiking trails and one of the densest chuckwalla (read: neat looking lizard) populations on the planet, this is a good way to work off a few pounds in the afternoon.

It's the final road trip of the season. Make it worth your while because it's a long wait to fly to Auburn, Alabama next year.