Board of Regents to vote on football operations building

The Board of Regents will give the thumbs up or down to the proposed Football Operations Building at their monthly meeting today in Spokane.

Share All sharing options for: Board of Regents to vote on football operations building

Your ordinary Board of Regents meeting isn't terribly exciting. Anytime you need to follow Robert's Rules of Order when comporting yourself with others generally means a great time isn't about to be had. In this case though, you may want to pay attention. On Friday, the Board of Regents will likely vote to give the athletic department the go ahead to start construction on the football operations building. Just about a month and a half ago, we got our first glimpse at what the building should look like when it's all finished. If approved, construction will start after the Apple Cup and is slated to be finished by Spring 2014.

Athletic director Bill Moos has stated on numerous occasions this type of building is critical if WSU wishes to become more competitive football wise. Besides providing an upgraded locker room, a dedicated weight room, coaches offices and housing the WSU Hall of Fame, the building can help provide a big recruiting advantage for Mike Leach and his coaching staff. The new building also means visiting teams don't have to jog all the way to the PEB at half time for orange slices and water. 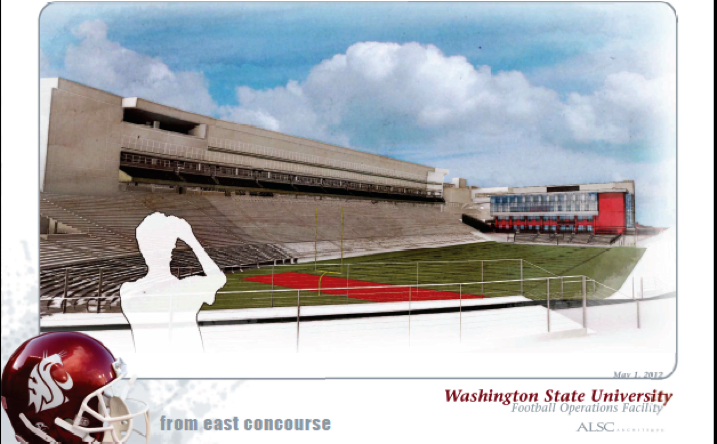 You can see randomly cropped out of the picture guy is still happy with the look of the building. But why is Washington State University spending a ton of money on a building just for the football team? There are a few reasons.

This is the obvious one but first and foremost, the football team should get better. A dedicated football operations building can help the coaching staff recruit better players and then train and condition those players once they arrive. The more a team wins, the more bowl games they go to and the deeper the athletic department's pockets get in the form of bowl payouts and, in theory, the more donations they get. It's the best kind of slippery slope.

Assuming the football team follows through on its end of the bargain, other teams will benefit from their success. The increased revenue could help a soccer team thats been to the NCAA Tournament four times in the last five years improve their facility. Some lights, better halftime accommodations, improved benches and media area and perhaps some longer grandstands would all be welcome changes to one of the most unique settings in college soccer. There have also been rumblings the athletic department would be interested in remodeling Beasley Coliseum. It was originally built in 1973 and is showing its age. A couple of coats of paint have helped but the building could still use a big overhaul.

With a project like the football ops building that could benefit so many aspects of WSU athletics, you'd expect their to be a catch, wouldn't you? You'd be right although it's a small one. The issue lies in what the Board of Regents must do after they approve the $61 million dollar project. The board must approve issuing $46 million in bonds to pay for the project. The issue isn't how to pay the bonds back, money from the Pac-12 media deal should be more than enough to cover it. The issue is this may max out WSU's bonding ability and the Regents could balk at that idea. Maxing out your bonds could means some academic and research buildings get put on the back burner to pay for the football ops building and you obviously don't just have the cash lying around to pay for it up front. I don't think the Board of Regents would vote against the project because of bonding issues as they realize the benefit it could have but stranger things have happened in this world. I'd put the probability of the Regents approving the project at about 98 percent but in the unlikely event they say 'no thanks' you've got your reason why.

Friday should be a good day for the Cougar football team and an event better one for Bill Moos. This has been one of the big projects on his radar since he took the job early in 2010 and getting the approval to get it done would be a bigger feather in his cap.