What is your favorite Apple Cup story?

It's Apple Cup 2012 week, and this has been the biggest event for Cougar football fans in more seasons than not. Many of us associate our best (and worst) Cougar football memories with this game, and there are no shortage of stories.

Mine comes from Apple Cup 2005. I was a junior at WSU and I had went to one AC in my life, the 2004 win at Martin Stadium. From the moment my financial aid check came in, I knew I wanted to attend my first UW-WSU battle in Husky Stadium. So I tucked away some money in my closet to buy a student ticket.

The student section that year was located in the open end of old Husky Stadium on some portable bleachers. It was a mob of less-than-sober WSU students that eventually devolved (or evolved?) into a mosh pit of sorts with every big Cougar play.

The bleachers were so much fun, I even declined an invitation to stand on the sideline. One of my good friend's Dad was a police officer at UW, and he came over to say hi and offered the opportunity. As cool as that may have been, it couldn't match the craziness that the WSU student section was that year.

Every Wazzu fan knows how that game ended. The Huskies decided Trendon Harvery need not be covered. Alex Brink saw that at the line and threw the easiest touchdown pass of his life. Harvey went "down the sideline" and the WSU won their second-straight Apple Cup.

After that touchdown, the mass of students moved across the track and up against a collapsible fence on the edge of the endzone. As Brink took a knee to run the clock out, we knocked down the fence and rushed the field.

We all ran straight to the purple W at midfield, and Husky football players didn't particularly appreciate that. They started shoving, and soon I found myself in a massive pile and pinned to the ground on the turf. In front of my eyes laid a gray beanie. I grabbed it and held it up for all the see, waiting for someone to claim it.

No one claimed it. So I took it home, washed it. The next day, a friend passed along this photo to me: 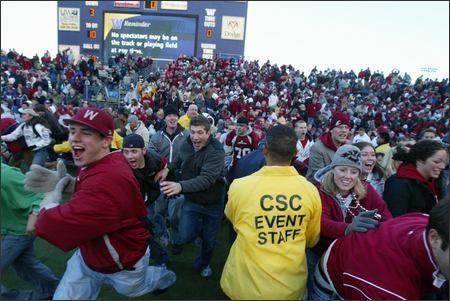 There is the beanie, right in front of me. That poor young women probably got shoved to the ground like me, and then she must have been heartbroken as she left the stadium without her headwear.

I hope that girl knows I have put that beanie to good use. It became my go-to hat for Cougar basketball games. I wore it so much, that when I walked into WSU's open practice session at Arco Arena on the eve of their 2007 tournament win over Oral Roberts, a reporter called out to me, "Where is your beanie?"

Of course, like any good Cougar experience, there was another shoe waiting to drop. As we were exiting the stadium, my friend was crapped on by a seagull.

Later, the alternator belt on the car decided to break on the freeway, causing my friend and I to be stranded on an overpass in the dark, in a completely dead car. Luckily, a police office pushed us off the road and another one of my friends' parents came to rescue us.

Still, even with the all the nonsense that ended the day, nothing beats an Apple Cup win. Especially in UW's house.