Part 1 in our 3 part analysis of the UW offense leading up to the Apple Cup. Bishop Sankey is a crucial part of what the Huskies do offensively, in particular the counter run game.

Share All sharing options for: Apple Cup 2012: A closer look at the UW run game

With the Apple Cup on Friday, let's take a closer look at what makes the UW offense tick. I am by no means an expert on UW's offense, but after watching their games against Stanford, OSU and Cal - this has been the most Husky football I've watched in any one particular season ever - it's fairly easy to see they heavily rely on the contributions of three key players; running back Bishop Sankey, tight end Austin Seferian-Jenkins and wide receiver Kasen Williams. Running the show is quarterback Keith Price.

Price will line up both under center and in shotgun, and UW has shown just about every personnel package in each scenario. Double tight, two back, single back and four wide receiver sets are all used fairly regularly by the Huskies in an effort to create matchup problems against their top three contributors.

This is Part 1 of an Apple Cup analysis series that will briefly highlight UW offensive tendencies, and will focus on a key aspect of the Husky offense; the running game. The Huskies run the ball 52% of the time, accounting for 40% of their total yardage this season. Establishing the run is crucial to UW's offensive success, as it takes some pressure off of Keith Price and opens up other aspects of their offense through play action.

The Huskies have an affinity for counter running plays. In a counter, an offensive lineman will run behind his fellow big men up front, "pulling" to become a lead blocker for the running back on the opposite side of the ball. The quarterback will typically take the snap and open in the opposite direction of the running play. In this play toward the end of the first half against CU, Sankey is able to pick up seven yards on some fine blocking by the UW line. 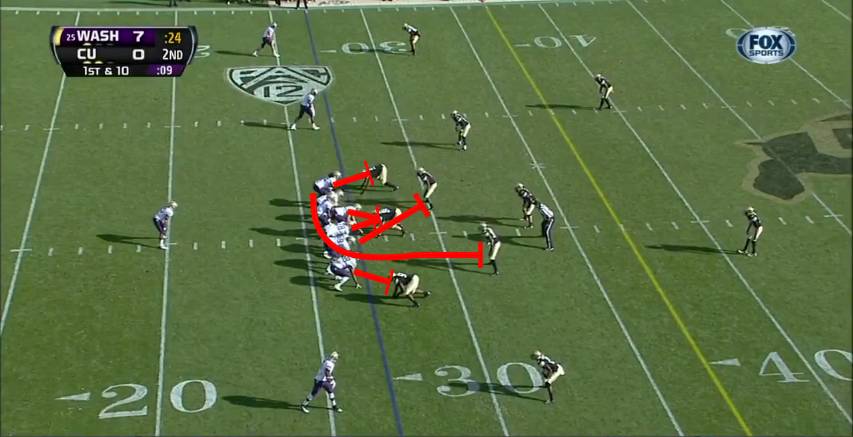 Colorado sets in a similar defensive front to what WSU occasionally runs when the BUCK or another backer isn't at the line of scrimmage. The nose tackle is zero shade (head up on the center) with the ends on outside shade of the end man on the line of scrimmage, this leaves inside gap responsibility to the linebackers; three of which are in the box and one has split the distance between the end of the line and the inside receiver. UW is in 11 personnel (1 RB 1 TE), lining up in doubles. The tight end is on the right side of the line with two receivers opposite him to the left. The left offensive guard pulls to become the lead blocker on the play.

In this next play UW comes out in 20 personnel and lines up in doubles with Kasen Williams alone at the top and two receivers to the right. UW will run the ball equally well from under center and in shotgun. Colorado shows a traditional looking 4-3 zone coverage presnap, but quickly rotates to a Cover 3, bringing the K. Williams side safety in for run help with the snap. This looks premeditated here, but mimics what we can expect to see from Deone Bucannon on any given run play. 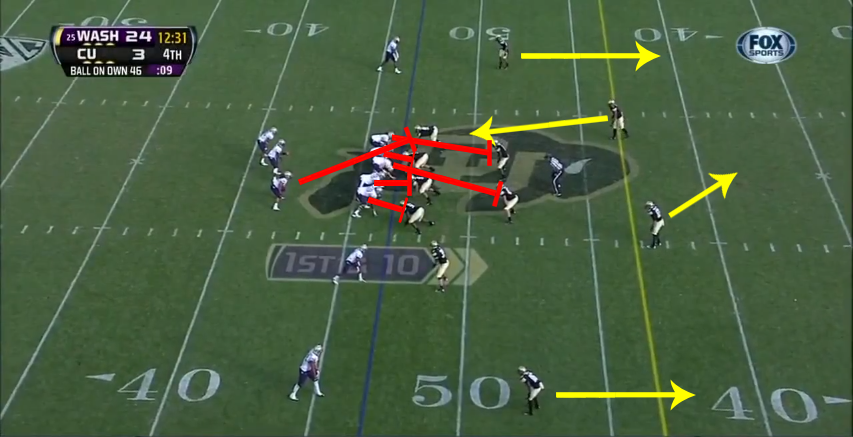 Sankey is shifty, accelerating well out of his breaks, and shows he can break a few tackles here. Kasen Williams is an extremely active blocker from the wide receiver position. UW will try to establish the run inside, the line does well enough at providing running lanes, and Sankey is very capable of breaking tackles and making defenders miss in the open field. Deone Bucannon leads the defense in tackles and will need to bring his best game when he fill gaps during the Apple Cup.

In establishing a running game, the counter for UW will be a focal point. They are very comfortable running it from a variety of formations and it serves as a basis for a lot of their play action. If they can get lineman to the second level on Coug linebackers, only Deone Bucannon and Casey locker separate Bishop Sankey from massive yardage and a touchdown.

Counter runs can be disrupted by a good push up front, Ione Guata is a big man that's very hard to move and aggressively gets upfield from his nose tackle position. Driving that center back into the pulling guard and a speedy gap fill by the WSU linebackers could place the defense in a very good position to make a play. Gap positioning (rather than the outside shade we see above) by a defensive tackle also makes it very difficult to have a guard pull without an effective down block by the center, something that would be very difficult to do with Guata in his face, or with offensive tackle help, either way a lineman that could've been second level on a linebacker is now occupied at the line of scrimmage.

Defensive ends crashing the line of scrimmage also present problems for counter runs. In an ideal situation for the offense, the play side defensive end takes an outside rush. But if the end can obtain leverage and crash inside, it narrows the width of the running lane and the ability of the pulling guard to get to a linebacker, leaving him free to fill the gap.

Missed tackles played a large role in the defensive struggle last week against ASU. The best position in the world won't help you if you don't tackle, and you can expect Sankey to do his best making tackling difficult.