Part 3 in our 3 part analysis of the UW offense leading up to the Apple Cup. The Huskies like to get the ball out wide, capitalizing on great receiver blocking and missed tackles

Share All sharing options for: Apple Cup 2012: UW and the wide receiver screen

In part 1 we looked at the running game, in part 2 we covered Austin Sefarian-Jenkins, but UW isn't all runs and Sefarian-Jenkins. They really like wide receiver screens, and are pretty good at it.

UW will throw quick hitters to the outside, when they aren't trying to stretch the field with Kasen Williams. They run multiple wide receiver screens with varying degrees of success. Price doesn't appear to discriminate, and will throw screens to any one of their receivers. Although they favor screens to the outside receiver, including the jailbreak screens we've grown accustomed to, they have also ran a bubble screen to the inside receiver.

Wide receiver screens are a relatively terrifying endeavor for fans of either side to watch. Either the defensive back makes a tackle and the play looks worthless, or they miss a tackle and the receiver has nothing but green in front and a safety with an angle. Bubble screens are notoriously the worst play in college football...until they work, that one time.

In a typical wide receiver screen, the outside receiver stays behind the line of scrimmage, making it legal for offensive lineman to block down field. The inside receiver will block the corner and an O lineman will try to pick up the outside linebacker if he's in the box. This leaves the receiver one on one with the near side safety a few yards down field, if the safety can close. 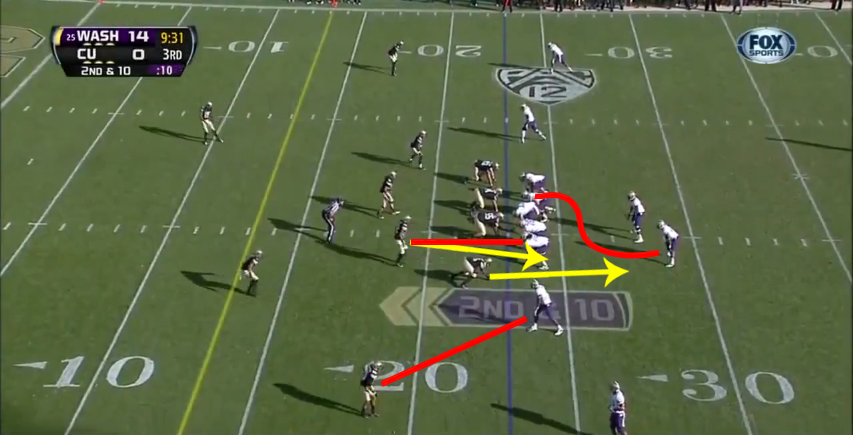 On this play UW lines up in a formation familiar to Coug fans, Ace. Colorado lines up in a standard looking 4-3. The UW O line down blocks to the right, and Price has what looks to be an option read on the defensive end. The left offensive tackle tries to block the linebacker and the defensive end is left free. UW does this to get a man on the outside backer, and to allow Price the opportunity to run the ball if the end crashes down the line on the run read.

The end doesn't bite and holds his ground. Price pulls the ball and takes a few steps, getting the defensive end and backer the offensive tackle couldn't block to both commit, then fires it out to his wide receiver. Kasen Williams takes care of the corner and the receiver makes the safety miss a tackle in the open field.

Kasen Williams is a very effective blocker, putting his hands on someone nearly every play. WSU corners and backers will need to shed his block to make plays not only for screens, but also in the running game.

The effectiveness of a wide receiver screen can also set up plays like this. 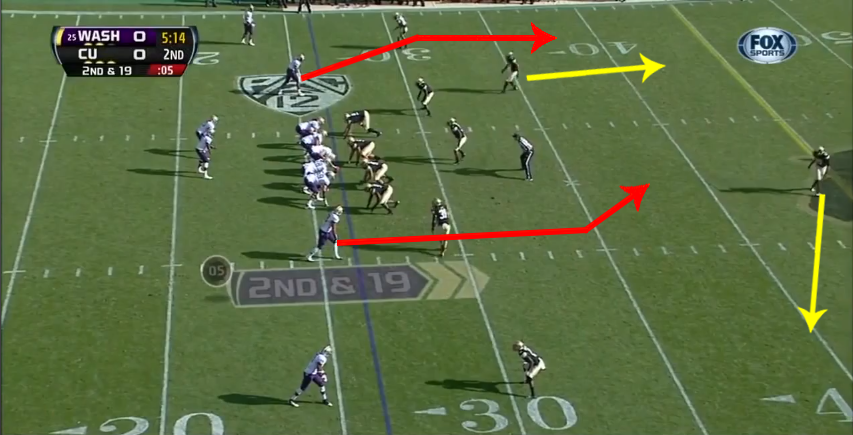 Sankey fakes an inside handoff and continues right, helping with protection. The receiver up top turns looking to accept a screen. Kasen Williams, on the inside, runs directly at the backside of the corner feinting a block then streaks up the sideline. The safety on that side of the ball initially lines up close, but takes a real deep drop with the snap, the other safety sprints to the numbers on his side, signaling a cover 2 defense. Both corners stay home, opening a window down the sideline, behind the corner and in front of the dropping safety.

The Huskies will feature a heavy dose of Sankey and wide receiver screens. Play action will be used extensively off the runs and can even be used as part of a read option package with a screen pass. These types of plays will force the corners and safeties to make tackles. One missed tackle and a 4 yard screen can turn into a 70 yard Apple Cup nightmare.