So, I was watching Arizona and Washington today and marveling at how the Wildcats seemed to mysteriously miss not just good looks from three, but wide, wide open looks. I thought to myself, "Dang, it seems like every team hits all of those against WSU."

Such a thought in my mind never goes unchallenged, so I cruised over to Statsheet.com to check out how teams actually have shot from three against WSU. I sorted their games from highest three-point percentage against to lowest, and discovered something that might mean something, and might mean nothing.

The Cougs' record against teams who shoot well from three against them is really, really bad. For example, when teams shoot above 38 percent from three against them, the Cougs are 0-11. Made sense to me: It seems like when teams hit their shots against WSU they lose, and when they miss them WSU wins. I threw it out there on Twitter as something interesting, and a few people said, "Well, that happens to everyone -- or something close to it."

Which got me thinking. Is that true?

So I went and looked at the rest of the Pac-12 and how dramatically their won-loss record was impacted (or not) by opponent three-point percentage. Of course teams are going to lose more when their opponents shoot well -- duh. So, I decided to see what the difference was in winning percentage when a team allows above a certain shooting percentage from three and when they allow below that certain percentage. If it's really as simple as some of those people on Twitter made it sound, then everyone should have a similar difference between their winning percentages, right?

One more note on methodology. I needed to set a threshold for "good/bad shooting day from three." I didn't stick with 38 percent because that just seemed too arbitrary to me -- obviously, that cutoff would favor my case. So I went to kenpom.com to see what the average three-point percentage is across Division I and found it to be 34.3. I set my line there.

Here's how Pac-12 teams rank by that difference in winning percentage: 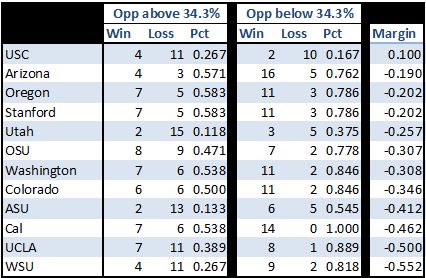 Now, this is highly unscientific -- and there are probably any number of you that could come up with a better way to try and quantify this -- but this quick-and-dirty investigation seems to suggest that the Cougars' ability to win ball games is impacted by their opponents' three-point percentage to a higher degree than their peers in the Pac-12. WSU has the worst margin -- 9 percent worse than anyone other than UCLA -- and only ASU and Utah have worse winning percentages when opponents have an above-average three-point shooting game against them.

What does it mean? We already know, via kenpom.com, that the correlation between effective field goal defense and the Cougs' defensive efficiency is plus-0.88. Perhaps WSU's opponent eFG% is driven more by threes than other teams? Obviously, there are other factors that can impact how dramatic of an effect shooting has on defensive efficiency -- the fact that the Cougs aren't particularly strong at taking the ball away or securing defensive rebounds probably makes them more vulnerable to the vagaries of shooting percentages, as they're unable to overcome the randomness in other ways.

I also find their very good winning percentage on opponents' below-average shooting days interesting, too. Given that the Cougs have the 48th rated offense in adjusted efficiency, this reinforces the idea that the offense is good enough consistently enough to take advantage and win a game when opponents miss some shots. In which case, the take away is GOSH DARN IT I WISH THE DEFENSE WAS JUST A LITTLE BIT BETTER AND WE'D ALL BE A LOT HAPPIER.

But honestly? I'm not going to pretend to know exactly what it means. Maybe something? Maybe nothing?

I'm actually curious about your thoughts. Fire away.