Hi, friends! We have something fun in store this week if you like Youtube, funny videos and COLLEGE! By we I mean SB Nation, the parent company of CougCenter and my full-time employer. Thanks to an amazing leadership team and talented staff, SB Nation will be launching into a new space on March 1, and it'll be fun to watch this thing grow.

On Thursday, we're jumping head-first into video with the SB Nation Youtube channel. It won't all be cat videos, but there is a feature piece on a crazy man's attempt to pet every breed at Westminster.

If that's not enough, can I interest you in jockstraps, scandals, tacos and COLLEGE? How about Spencer Hall and Jason Kirk, two of the most talented and funny people I know, yelling at you about college football? Meet the Shutdown Fullback!

Dan Rubenstein, of Solid Verbal fame, and Matt Ufford, of Kissing Suzy Kolbert and Warming Glow fame, are teaming up for a studio show. It'll be a little of everything and they already have a few hilarious ideas, as you can see in this not-so-serious teaser. 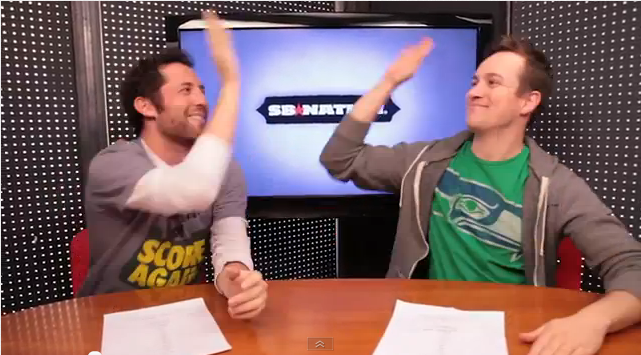 Notice Matt wearing an old-school Seahawks shirt and Dan wearing a University of Score Again shirt in the video. Northwest connections all over!

Amy K. Nelson, formerly of ESPN, will be hosting The Full Nelson, an excellent show that'll some longer, feature-type pieces. The promo video for her show opens with a shot of Seattle and a familiar face to Sonics fans. A little birdie told me she was in Seattle a few weeks ago and sure enough, there she is with Shawn Kemp at, I believe, Oskar's.

Last, but certainly not least, Bomani Jones will host Bomani & Jones (it's just one!) on Thursdays. Every single feature piece Bomani has written makes me stop and think, and I'm positive his show will do the same.