Share All sharing options for: HOT COUGAR ACTION: Recaps And A Caption Contest

Well, that game was not very enjoyable. I don't have much of a desire to write anything about it beyond what I wrote last night. If you'd like to read more than that, you can start with official stats then work your way to the recaps after the jump. While the end result wasn't what everyone was hoping for, the game wasn't a total loss. It did provide a few interesting photos, including the picture for today's caption contest. 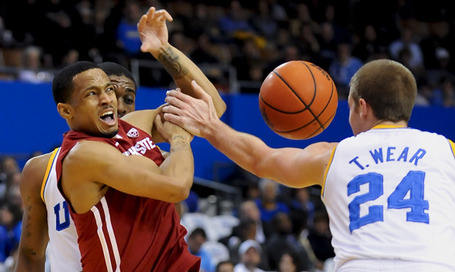 Cougar Basketball | UCLA crushes visiting Cougars, 78-46 | Seattle Times Newspaper
LOS ANGELES — Seldom-used forward Brendan Lane finished a breakaway dunk in the waning moments on Thursday night, bringing the UCLA crowd to its feet. It was just one small play in an already decided game, but it provided a moment of pleasure amid a few days of negativity.

UCLA overwhelms Cougars - Spokesman.com - March 1, 2012
LOS ANGELES – Though few bothered to watch, many had to wonder how the UCLA basketball team would respond to the negative publicity it received from Sports Illustrated this week.

The game that was: UCLA 78, WSU 46 - SportsLink - Spokesman.com - March 1, 2012
FROM LOS ANGELES — That was the most frustrated postgame session I've had yet with this team, and understandably so. We sift through the wreckage with our game in review. Read on.

Pac-12 pre-spring power rankings | National Football Post
10. Washington State: The Cougars may have made the best hire of the offseason, bringing in former Texas Tech head coach Mike Leach, who never missed the postseason while guiding the Red Raiders. Former head coach Paul Wulff didn’t leave the cupboard bare either, especially on the offensive side of the ball. The Cougars could be primed to vault up these rankings with a strong spring.

SportsMinds: WSU Baseball: Previewing Northern Colorado
This weekend the WSU baseball team plays three against the University of Northern Colorado (UNC) Bears, a team I knew literally nothing about until just about 20 minutes before writing this. This post could be long or short, depending on how interesting the Bears are.