Share All sharing options for: HOT COUGAR ACTION: WSU And OSU Meet In The Pac-12 Tournament

Who's ready for some lunchtime college basketball? In a mere six hours from the time of this post, Washington State will face Oregon State in the opening game of the Pac-12 Tournament. If the Cougars win, they will advance to play Washington. A loss could end their season or at best send them to a low level postseason tournament.

A lot of you will likely be at work or in class during the game, but fear not, we will still have a gamethread, radio feed and enough live stats to keep you from doing anything productive. The only previous time WSU faced OSU in the conference tournament, the teams played a double overtime thriller with the Beavers winning 74-68. Based on that sample size, there is a 100 percent chance this game in entertaining.

If that isn't enough to convince you to watch, there is also the fact every WSU-OSU game produces hilarious Craig Robinson pictures, just like this one. 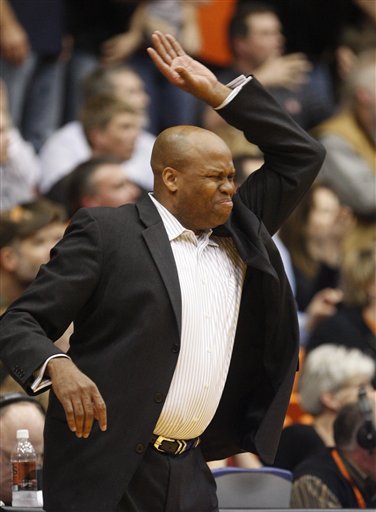 WSU's Lodwick: 'We can play with the best' " Kitsap Sun
LOS ANGELES — Abe Lodwick, who is considering a career as an attorney, was working with rather flimsy evidence when he made his case for Washington State making a successful run at the Pacific-12 Conference basketball tournament.

Cougars have had success against Oregon State - Spokesman.com - March 6, 2012
LOS ANGELES – For Washington State this season, beating Oregon State has been as easy as 1-3-1. As in, beating the Beavers’ 1-3-1 zone, a staple of their defense under coach Craig Robinson.

Cougars will host CBE Classic - SportsLink - Spokesman.com - March 6, 2012
FROM LOS ANGELES — Some future basketball news for you — Washington State was announced Tuesday as a host team for the 2012 CBE Classic, which will take place in November. More details below.

Pac-12 Women: Cougars, Huskies hope to make a run " Kitsap Sun
LOS ANGELES — June Daugherty continues to find coal in the bottom of her stocking, and she continues to presume the coal will eventually turn into diamonds.